Only last week I talked about whether PS Plus was still good value and mentioned that Velocity 2X looked set to maintain, if not improve, on the quality of Velocity Ultra. Well, not to blow my own trumpet as it were, but on this occasion I may even have failed to do it justice. What a game…

In the PS4’s early days, it’s not been lacking for quality shooters, with Resogun being a particular standout, but many more also making an appearance. So on the face of it; this wasn’t perhaps a title PS4 users would have been crying out for. What you get is the Quarp jet, a ship that can teleport to help you jump between points in each level.

This is nothing new, Velocity Ultra played in the same way, requiring you to pick up “rescue pods” as you go. However, added to this, Velocity 2X has a couple more tricks up its sleeve, one of which I won’t spoil here other than to say it’s a mind bender, but the big change is the addition of “on-foot” levels with Lt Kai Tana running around picking up crystals, blasting foes and so on, with the teleport ability continuing here as well.

There isn’t really much to do other than make your way through each level as quickly as possible, while trying to collect everything; but Velocity 2X does this so well, it’s incredible. The controls take a little getting used to given that you’re not just shooting but also have to teleport and, to get the quickest times, use boost too. Early on this meant I took things quite slowly and got in a bit of a mess on several occasions, especially mixing up shoot (X) and teleport (square), but once it clicks into place, the feeling of blasting through each level is pure adrenalin. 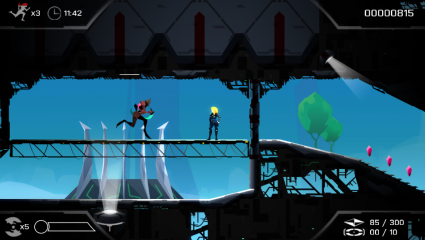 Nobody panic, that’s just an angry looking alien with a big blue knife. Nothing to worry about…

When that click happened for me, I was utterly hooked. Over the space of a couple of days I made my way through all fifty levels, and then in a rare moment for me, I started going back through the levels to try and perfect them all. This is generally a mix of time, number of crystals collected, pods rescued, and points scored. To get a perfect though you have to finish the level without dying too…

This isn’t too tricky early on, but on the later levels this is punishingly hard, to the point where I sometimes wondered if it was even possible to begin with. Little by little, though (and over several hours), the times would come down, the levels seared into my brain, and I would find myself getting there. Even eventual success would often only result in scraping some times by a mere second. I’d love to get the platinum if I can, although that would be some feat, after trying a couple of the late levels and coming up woefully short. Velocity 2X is the epitome of a just-one-more-go game though, so I can guarantee I’ll be giving it a damn good go.

The odd boss battle pops up along the way and these are well done too, I found they forced me to use the full arsenal available to me, including teleporting, and some bosses even require you to fly into them for some on-foot sections.

There is a story here, with our heroine waking up captive and with some non-human body parts, then having to escape and deal out some justice to her captors. This is all told in still screens with text, but the art style, while cartoony and fairly simplistic, has plenty of style and pops out of the screen nicely. This continues into the levels, with distinct areas, and pyrotechnics everywhere you go. It’s fair to say this is a hefty upgrade from the original, although in fairness that started life as a PS Mini. 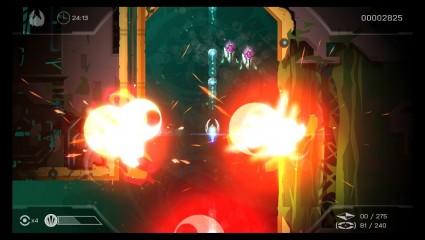 Those are some shiny explosions…

Velocity 2X doesn’t just look great though; it’s got a brilliant soundtrack too, pumping electronic music which compliments the action perfectly and only serves to heighten the adrenaline rush.

The final thing to mention is that Velocity 2X is crossbuy (and cross-save) for Vita too. It looks just as impressive on Vita, and I didn’t notice any difference between the two versions. If anything, the minor negative worth noting is that the smaller analogue sticks on Vita make it ever so slightly trickier to control, an important factor when speed and precision are so important to doing well.

One thing’s for sure; whether on PS4 or Vita, Velocity 2X is an excellent shooter, and a classic just-one-more-go title. I couldn’t put it down while trying to go through each level, and then it still had enough to drag me back in for those elusive perfect medals. If there’s any downside at all, it’s that at such high speed the controls did get the better of me quite often, but even then that just spurred me on to get better, trying to nail that perfect run. Whether you’re a big fan of the genre or not, give this a go, it’s one outstanding shooter.