As you’ve probably guessed, Yakuza: Dead Souls is about zombies. At this point, zombies are a bit of a cliché, with many games delivering different experiences wherein the world gets rocked by the arrival of our undead brethren. So how exactly can this niche Japanese title about organised crime stand up to the rotting, smelly giants such as Left 4 Dead and Dead Rising?

I love the Yakuza universe. Previous games in the series delivered cohesive and memorable experiences of the tensions and tribulations you face as a member of the Yakuza. With sprawling urban environments and odd little interactions with other members of the Yakuza and the warring factions, there tends to be a lot of over the top violence and action. Yakuza: Dead Souls is no different.

Tokyo has been overrun with gratuitous amounts of zombies, and who better to take care of them other than our heroes? There’s Yakuza series stalwart Kazuma Kiryu, the fan-favourite and mysterious money-lender, Shun Akiyama, and Majima Goro. There’s also a legendary Yakuza from the past, Ryuji Goda, who just happens to have a gatling gun on his arm. This seems oddly convenient, since his series debut just happens to be the last while everywhere is overrun with zombies.

It seems that not a lot has changed since the previous Yakuza games in terms of delivery. The story is mostly told through text with minimal dialogue, which at this gaming generation seems like a big step back in terms of accessibility. You sometimes sit there hammering X just to advance the lengthy dialogue that happens throughout the game. There are occasional cut-scenes but you can expect to be sitting there for a while, as the story progresses and moves on with its political dynamics whilst the world falls into chaos.

The dangerous Yakuza, Kazuma Kiryu, comes back to the streets of Kamurocho to save his kidnapped daughter. It’s a fairly good vehicle for the rest of the game, but in the end feels awfully inaccessible to people who have not played past games in the series. There are many familiar faces, and the game plops you straight into the world without much exposition at all.

However, since it does hark back to other Yakuza games, fans may find this one to be one of the most enjoyable Yakuza experiences of them all, and what a sendoff it is. Explosive doesn’t really cut it if you’ve been following the series. If you’re a fan you will most likely enjoy the story of the invasion of Kamurocho and Kazuma Kiryu’s return. 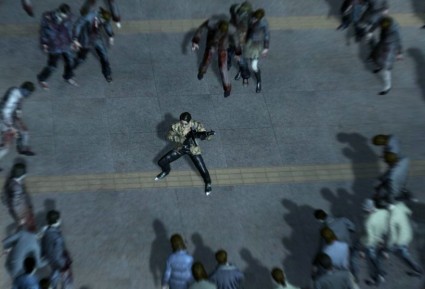 How to make any gamer better: Add zombies.

People without gatling gun arms need not apply
Yakuza: Dead Souls stands out from the rest of the games; not just because of the zombies, but because the past games in the franchise had an extremely polished and cohesive combat system that flowed, took skill and was incredibly fun. Dead Souls, however takes all of the brawler combat out and substitutes it for guns instead. This just doesn’t work well in the game’s engine. You would expect the actual combat to be a third-person shooter akin to other games like Binary Domain (a game by Yakuza’s former creative director) and work fairly well as a result; however, in Yakuza: Dead Souls it’s just odd and out-of-place. It feels retrofitted for the engine rather than actually built especially for the game.

The shooting feels especially mishandled, as you simply point to your target and the game will auto aim the shot for you. This feels strange and oddly bolted-on to the game, and is simply just not fun. The Yakuza series should have stuck to its strengths; I’d much rather throw bicycles at zombies than shoot at them awkwardly. It’s not a great strength of the game at all and weakens the experience as a whole.

Luckily though, Yakuza has a host of mini-games that you can play in-between missions. There’s a wealth of stuff to do on the side, like play ping-pong with a hostess, have a game of darts or go fishing. These are a nice breather from the relatively tenuous and unenjoyable combat that plagues the rest of the game. It’s the world’s charm which carries this game, and the small character interactions and side-quests aid a lot to the game’s merit.

Land of the Rising Sun
From a westerner’s standpoint, the world that Yakuza: Dead Souls shows of Japan is amazing. The small, narrow roads and convenience stores around every corner provide a cohesive and realistic look to the district of Kamurocho in Tokyo. Aided by the bustling streets with nice textures, it provides a level of verisimilitude that we do not often see in other open world games, that can feel empty or soulless.

Gangsta beats
The game simply has that “life” to it that many others strive to achieve, and it’s one of the hallmarks of the series. The sound design really plays a part in this, and is as well-produced as the aesthetics of the game. It all provides for an additional degree of realism to this quirky Japanese zombie gangster thriller. 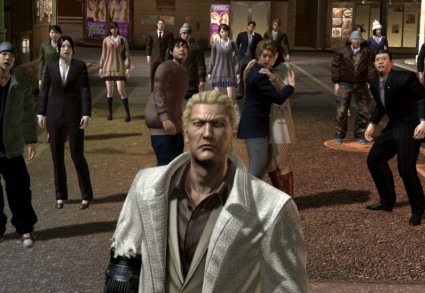 Dénouement
As the final chapter in the Yakuza series, I cannot help but feel a little disappointed by Dead Souls. The combat feels extremely awkward and took a lot out of the game for me, as an element that was the staple of the series is the awesome hand to hand combat, which is sorely missing here.

However, I was impressed by how the game introduced both new and old characters and somehow melded them all together, as well as passing references to previous games, making for a very enjoyable story mode. I’d say that you should try this if you are a fan of the series or just have a passing interest. The combat does not hold up especially well and can feel very odd, but the game’s scenario has many fun moments that are definitely worth putting up with the combat for.