Even in their heyday, I can’t ever claim to being into point & click adventure games all that much. Zack McKracken and the Alien Mindbenders was my childhood highlight in the genre, while my experiences with everyone else’s favourites (Broken Sword, Monkey Island and Day of the Tentacle, etc.) have only come in recent years.

So, that would explain how I’d never happened upon anything by Spanish Developer, Pendulo Studios. My wife has, though, and eagerly informed me that their big hit was with the Runaway series; a light-hearted point & click adventure that has gone on to sell pretty well. A ‘Runaway’ success, if you will. Fnar Fnar!

So, it was with great interest that I went into their new game, ‘Yesterday’. After a little research, it seems to me that this new title is the result of a team stepping outside of their comfort zone and trying their hand at a darker, more gripping tone.

Is it Yesterday’s news, though?

Your name is ‘John Yesterday’. Seriously?!

Yesterday opens pretty grimly. Homeless people are being murdered in the most heinous ways, usually found charred after being burnt alive, with no clear motive. While the police simply don’t care and are too busy to investigate the deaths of nameless vagrants, charity worker Henry White and his best buddy, Cooper, are the first to take it upon themselves to find out just what is going on.

Fast forward a few years, and at the centre of all this is amnesiac John Yesterday, an unremarkable man with a remarkable scar on his right hand. He remembers nothing but the fact that he tried to take his own life while helping an older and richer Henry with his investigations. Following his recovery, he attempts to pick up right where he left off.

I can’t really elaborate much more than that, unfortunately, through fear of spoilers, as Yesterday dispenses with some of its biggest surprises right from the off. Thankfully, it doesn’t quite lay all its cards on the table at the very beginning, as the story does continue to twist and evolve the further you delve, still managing to surprise you just as you think you’ve got it figured.

What I will say is I can’t help but feel that in structure, pacing, and in some of its themes, Pendulo have been influenced slightly from Broken Sword. I’m not talking wholesale thievery or copyright infringement here; I’m talking a nagging feeling throughout that I’d seen very similar locales and events elsewhere before.

The important thing to stress, however, is that in a genre where storytelling is paramount, Yesterday thankfully just about delivers enough intrigue to make it a story worth telling. It is surprisingly short, though, taking me just a few hours from start to finish. I don’t know if Pendulo has plans for this to be an episodic franchise, that’s not clear; but don’t expect it to take very long. 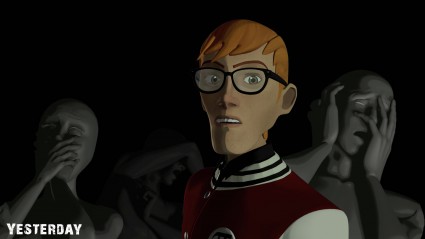 You begin the adventure with Henry White, investigating the recent murders of the homeless.

Point, point, click, click…
On the face of it, Yesterday is just like any other point & click adventure game. You click areas of interest in the environments, investigate them, pick up any useful items and combine or use them to progress. When you do click on an area of interest, it pops up in a box styled like a comic book panel to allow you further interaction; a nice little touch that fits in well with the visual theme. Other than that, there are no surprises with how the rest of the game works. There are some niggles though.

The inventory, as you’d expect, appears at the bottom when your cursor is near enough. For some reason, Pendulo have gone for one button system when using it. Hover your cursor over the item you want and an icon will appear that indicates what will happen when you click on it with the left button. This icon alternates between the actions for Look and Grab on a short rotation. Often you’ll try to grab an item to use it in the world or combine it with something else, only for a close up view and accompanying explanation to appear instead because you’d missed the window of opportunity by a whisker.

I found this deeply annoying, especially when the right-mouse button goes completely unused. Is it really too obvious to have ‘Use’ mapped to the left button and ‘Look’ the right? Even a ‘Click to look, Hold to use’ function would have served as a much more user-friendly solution. It’s an odd decision.

While at times they might seem a little abstract (aren’t they all in this genre?), the puzzles themselves are pretty decent on the whole. My personal favourites came when playing as John in flashbacks, as he tries to figure out how he knows the things he knows. The pacing with the puzzles gets a little muddy at times, though, and the difficulty spike drops massively just before the big finale, when it should just be gearing up.

Yesterday does at least have a couple of decent hint systems, should you get stuck by the genre’s famed leaps of logic. At any time in an area, you can click the Target icon for it to briefly show you anything that can be interacted with. If that’s too subtle, you can click the Light Bulb icon for a text-based clue. The use of the Light Bulb is limited, though, and recharges slowly as you keep clicking on things, trying to work it out for yourself first.

Both work rather well as a little push in the right direction, and although you’ll probably not need to use the latter too much, it’ll prevent frustrating moments where you wander around aimlessly for hours, rubbing your inventory on anything that’s usable. 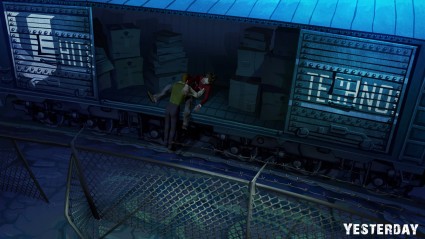 Creepy caricature
While Yesterday apparently takes a darker tone in storytelling compared to Pendulo’s previous work, it does keep the hallmarks of their usual visual style. The key features of both the environments and characters are prone to exaggeration, almost to the level of caricature. The thing is, it really is the perfect example of an art direction that will either resonate with you greatly or just not at all, depending on your own preferences.

Personally, I found it a fitting style to both the genre and the setting. Cartoony it may be, but combine that with the dark, oppressive atmosphere throughout, and it adds an extra level of eerie to proceedings.

No Beatles?
For what it is, the voice acting is not without its charms and certainly better than I expected it to be. The cast play their parts decently enough to be convincing, and they all fit too, with no one sounding miscast in the slightest.

The soundtrack fares much better, though, with high strings and creepy ambience always tugging at your frame of mind, while the title track with its haunting whistle perfectly sells the atmosphere. There’s some great music to be found here. 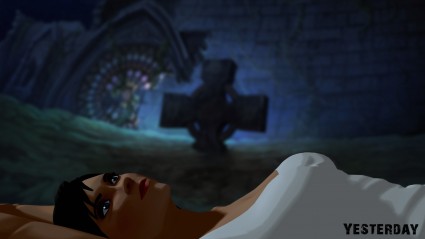 A diversion, not a triumph…
I have to admit that Yesterday surprised me somewhat. There’s a decent and atmospheric point & click game to be found here, hampered only by some minor niggles. The story is rife with mystery and it’s definitely interesting enough to take you through to the end. It has to be said, though, that at a just a few hours in length, that end comes far too soon to completely satisfy. Especially at that $30 price mark.

While it probably won’t stand up quite so well when stacked against a lot of the output from TellTale, and may not seem as charming or as witty in comparison to some of the genre’s classics, I did at least find that there was just enough here for me to keep one eye on the franchise going forward.