I’ve mentioned it a number of times now, but for those that haven’t been paying attention – I’ve fallen in love with Zen Pinball 2. I know, I sit here with technology capable of amazing things, able to transport me to amazing new worlds and whatnot, but what do I do? I emulate an old-fashioned arcade staple which is now practically extinct.

In my defence, Zen Pinball 2 does things that no real-life pinball table could do. Most tables contain all sorts of outrageous animatronics and ramp formations that just couldn’t or wouldn’t get made. So, not only does Zen Pinball 2 create amazing tables, as the title of this post suggests, they pick up some amazing licenses too. It’s fair to say that even if I wasn’t a massive fan of ‘Aliens’, I’d still have glowing things to say about these tables.The first thing to explain is that this pack contains three tables. One based on the ‘Aliens’ film, one borrowing from the fantastic ‘Aliens: Isolation’ game and, rather oddly, there’s a table dedicated to absolutely no one’s favourite movie ‘Aliens Vs. Predator’.

Each table is absolutely brimming with missions to complete and skill-shots to perform. Be warned though, you will need to read the in-game manual or look at the on-screen LED display to read just what it is that you’re expected to do to activate these activities. Bear in mind as well, these aren’t called skill-shots for nothing. You will be asked to perform a challenging series of shots to activate some of the cooler table features. You’ll want to though, because each table has its own unique and setting appropriate elements to work your way through and to help boost your high-score. 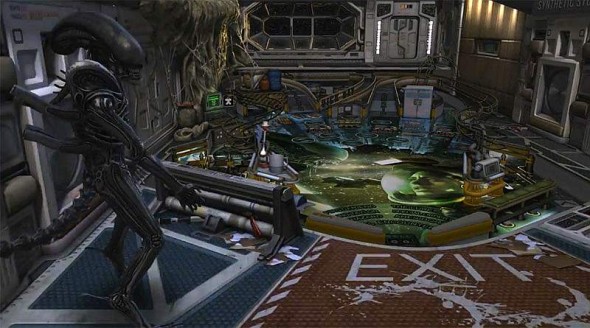 The Alien: Isolation table has a xenomorph stalk you whilst you play. It’s surprisingly effective.

What’s brilliant is that each table leans so heavily on their respective source material that you end up having three tables that approach pinball in completely different and entirely fitting ways. With the ‘Aliens’ pinball table you’ll play a much more action-orientated form of pinball, where you need to hit a seemingly never-ending swarm of pop-up Aliens. On the ‘Alien: Isolation’ table you need to play much more cautiously, picking and choosing the ramps you want to shoot for else you’ll alert the Alien to your presence. The ‘Alien Vs. Predator’ table plays like a non-stop load of nonsense, battles and loud noises. All true to their sources, you see?

Whilst Zen Pinball is to be commended for creating pinball machines that could never exist in the real world, some of the more ‘out there’ elements fall a bit flat and fail to be as enjoyable as the base pinball. For example, the Aliens table has you driving the APC vehicle that appears in the film. These sections control quite poorly and just aren’t that interesting to play. You’re simply moving left and right, trying to dodge boxes while a timer counts down. On the Aliens Vs. Predator table you have to solve a fairly simple puzzle that involves rotating blocks that sit atop a pyramid. Luckily these sections don’t last too long and you’ll be back to the pinball table soon enough. 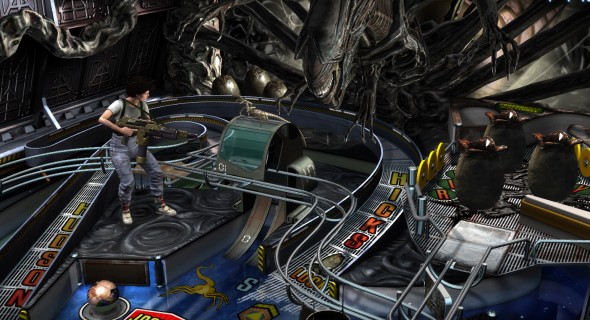 The Queen Alien will happily devour any pinballs that come her way. Better than eating your face, I suppose.

Nobody can  hear you scream… in delight!

This is a great collection of tables. The licenses are used unbelievably well, featuring audio clips and digitised video. The tables are well designed and offer plenty of tricky shots to pull off. Whilst some of the more ‘gamey’ elements don’t play too well, the package as a whole is so well put together and the license used so well that as a pinball fan, it’s hard not to be pleased.