Friday saw the two-hour live game show called 1 vs. 100 finally launch onto Xbox Live, and a large number of Gold Subscription members over in the UK finally got to try their hand at its brand of multiple choice trivia.

For those that didn’t get chance to download and check out the extensive beta test of the first addition to Xbox Lives ‘Primetime’ channel that was announced at E3 last year, or found the concept a little confusing at their first glance, Neil takes time to explain his findings with the experience of being in a game show.

Let’s get the basics out of the way. Only one person is “The One”, a hundred people are in “The Mob” and everyone else is in the crowd. It tells you at the start of the round where you’re playing. The Mob are those in front of the blue dotted screens, and the crowd are in front of the purple stripes. Of course not all 75,000+ players are shown; you’ll see your row and some random avatar’s too. 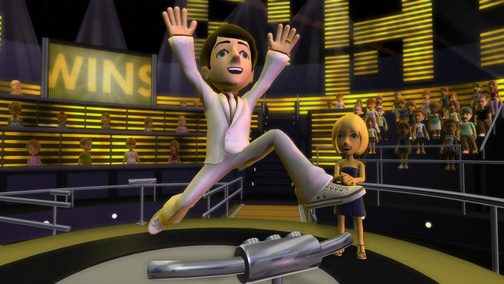 This guy looks waaaaay too happy.

This is where there seems to be a little confusion when playing the game for the first time; but everyone that is on Live and has loaded 1 vs 100 is in the same room, there aren’t hundreds of little games playing at the same time as you would expect with usual online games. At random points in the game it shows you how many people are playing which illustrates this. In stat breaks you’ll see “14,876” got 5 questions right in a round for example.

Questions are asked and then you are provided with three choices assigned to the X, A and B buttons which are revealed one at a time. You get points based on the speed of your answer along with the important factor of getting it correct (if you are the one, or in the mob however, this is how you get knocked out or lose the game). The questions are very well localised as a lot seemed to be aimed at people from a primarily UK based audience.

The big question people ask is “What’s the point in playing if you’re in the crowd?”. Fun is the best answer that I can give you, If you only want to play to be in with a chance of winning a small amount of Microsoft Gamer Points, it would be much easier to just buy some! A few of our staff and members from XBLN.net partied up on Friday night, and had an excellent night of banter competing against each other.

The better you do the more entries you get in the sweepstakes, The better you perform in the crowd and in the weeknight games (from 18:30 Monday) the more chance you’ll have getting into The Mob.

Sadly, I initially made it into the mob but didn’t know exactly what was happening or how to play and ended my session early to try and meet a friend and spent the rest of the night in the crowd, because you are only allowed into the mob on one session per episode. A prime example of a Rookie Mistake/Schoolboy error. I also learned a very valuable lesson about rushing to answer a question without thinking it through properly, when I answered Jeremy BEATLE instead of Jeremy Beadle. 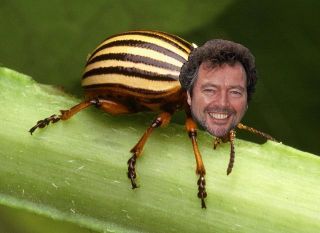 Jeremy BEATLE! Get it?!

Most of the questions were maybe a little too easy but judging by the amount of wrong answers being given by many of the mob, maybe the standard of general knowledge does not need to be that of a average pub quiz. They also have different themed quizes, such as a football quiz this Thursday, and a harder quizes scattered through the week.

There is room for improvement but for an opening night I think 1 vs. 100 was a great success and a whole lot of fun. I enjoyed the first beta episode with 8 people aged between 17 and 40 and every one of them loved it, which is the best straw poll I can offer you all. I would advise anyone to give this a go, it’s a fantastic idea, a lot of fun, and you have the chance to win something in process.

The games return this very Monday evening, so maybe I will see you all there.