Now that E3 2013 is officially in the books and we are at the start of a summer period that is usually not so good for new releases, we can focus our attention on the single most important debate of the gaming year. That’s right ladies and gentleman; the question on my lips is not so much Xbox One or PS4, but FIFA or PES.

Both EA Sports and Konami gave some new details both in the build-up to and during E3 week about this autumn’s football titles. For those of you who weren’t paying attention, the big news is that Konami have decided not to launch PES 2014 on either next-gen console, period. Ironically, while we are still very much in the chest pumping faze of this particular fight, it would appear that PES 2014 might just be taking the bigger overall leap. Read on to find out how.

The decision by Konami to keep PES 2014 current gen only is a brave one, giving their biggest rivals almost a full year unopposed on the new systems to build some loyalty. Having said that, you have to hand it to the development team for their honesty:

“We can’t and shouldn’t be just using higher quality textures etc. [Next-generation PES] should be new. In the past, people accused us of being lazy. We’re adamant of not making the same mistakes, and making sure we create amazing football games. It’s hardly amazing making the next-gen version prettier. We shouldn’t have that mentality, and you shouldn’t expect that. Aim higher.”

This also puts a little pressure on EA Sports in my mind to produce a version of FIFA 14 for the new consoles that does a bit more than just look shinier than its Xbox 360/PS3 sibling, but that particular debate can wait for another day.

Starting with FIFA then, what do we know? The focal points for the gameplay are as follows: 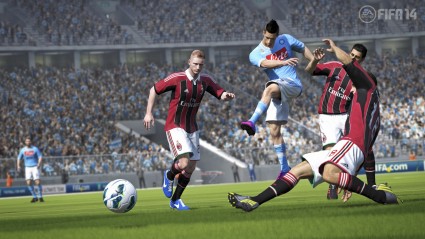 Dipping, swerving shots will make a top keeper priority one.

‘Precision movement’ promises to allow us a little more freedom of movement, particularly when on the ball and especially with the better players. This could set up the potential to leave defenders standing with movements like the juke and spin we are more used to in EA Sports’ other mammoth franchise, Madden.

‘Protect the ball’ sounds largely like an upgrade of the player impact engine we were introduced to last year, with players getting a little more solid. So hopefully when two players come together, rather than one of them just clumsily tripping over, there might be more of a battle. 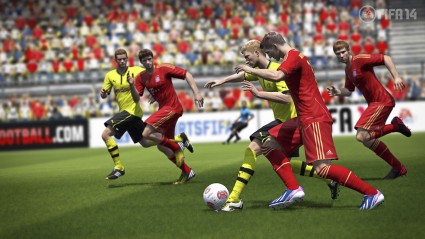 Sounds promising, but as yet we are not entirely sure how this will affect games and if there will be any additional player control over shots to master, or if the spin will be determined more than ever by a mix of the player’s body position and overall rating. My fear is that if it’s the latter, it could end up making the gulf between those that have the top level players and everyone else greater than ever.

‘Teammate intelligence’ to me sounds like a repeat of what we heard last year. To paraphrase, CPU players will have more intelligence, will make better runs off the ball and defend better collectively to make the game flow more. I felt a little disappointed with how little impact this feature seemed to have last time out so forgive me for being sceptical of what, if any improvements we’ll see here.

The ‘Global Scouting Network’ is the final big addition and is one that fans of the Career Mode should be happy about. In a move that will arguably show off the FIFA rights more than at any previous stage in the franchise history, you will now be able to send your scouts out to regions looking at specific types of players and, with another nod to Madden, perhaps take some of the emphasis off of the overall rating number as you look at players’ specific traits instead. I’ve often kept away from the Career Mode, preferring Ultimate Team, but I love the sound of this and think there may now be some genuine entertainment in playing purely as a manager. 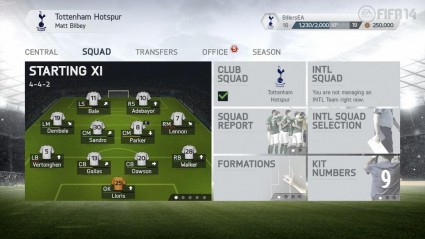 Finally the Career Mode could be worth investing time into

As for PES, Konami are surprisingly using the final edition of the game before new consoles hit to give us a new game engine and the most “comprehensive advance for the PES range since its inception.”

The statements regarding the new game engine and what it can do are bold to say the least, such as “throwing off the shackles of previous limitations and allowing the PES Productions team to produce a game much closer to their vision of recreating the excitement and variety of a top-level match.”

As with FIFA, the big idea is to make the game play a little more fluidly as the world adopts the Barcelona model as the definitive way to play the game. There are a collection of key components that will hopefully bring this to fruition to get excited about. 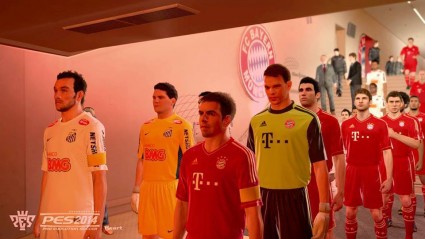 Player models look better than ever

‘TrueBall Tech’, like FIFA‘s ‘Real ball physics’, focuses on the movement of the ball and how it reacts to the player. Taking it a step further, the developers promise to give the player “total control in determining how their body is angled to receive a pass” and saythat “TrueBall Tech means that it can be chested or nodded past an opponent, flicked into space or to a team mate, while closer dribbling control is a much more personal attribute in the new game.”

‘Motion Animation Stability System (M.A.S.S.)’ is basically your physical side of the game. Last year’s PES was by far and away the best to date in mimicking the upper body tussles that are commonplace in modern football. MASS is the upgrade of that collision detection mechanic. The developers tell us that the outcomes of these physical battles will be far less pre-determined than in previous games, but I’d expect big lumps like Nemanja Vidic will often out muscle the likes of Luis Suarez.

‘Heart’ is billed as being something of the crowd effect on your players, so in a hostile away game some of your team may shrink a little, while they would be lifted in front of 50,000 of their own supporters. Similarly players will react to their teammates performances, so if you have Messi in your side and he runs past four defenders before curling a thirty-yarder into the top corner, the rest of the team will get a lift and raise their game. I like this idea and hope it works as well as it sounds. 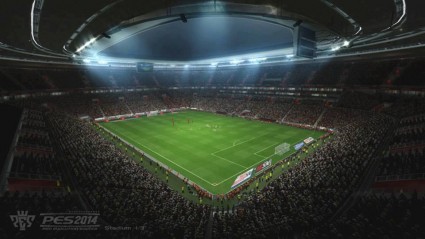 ‘PES ID’ was introduced last year and gave a selection of fifty players genuine personalities copied from their real life counterpart, so you could recognise a player on-screen simply by their movement and playing style. This year that number will double giving the title even more visual realism on the players. I expect this kind of thing is limited in PES due to licensing, but if they can use the concepts that go into those special players on the rest to add more realistic movement across the board then it could be a winner.

‘Team Play’ is, for me, the most exciting development in PES 2014 and an area that Konami’s game has recently overtaken its rival, in my opinion. Last year’s game had the best same team A.I. I’ve ever seen in a football game, with your CPU controlled players making better runs of their own accord to open up the game. From what we’ve heard, this will be boosted with a new ‘Combination Play’ system that will allow you to “set up a variety of different tactics in key areas of the pitch using three or more players”. Basically, you’re creating your own triangles to beat defences. What’s more, you will be able to set these to specific areas of the field. I cannot wait to see this in action.

‘The Core’ is probably best described as the underlying nucleus that makes PES what it is. For example the graphical style, the cut scenes, the stadium design and the player animations. This year, with the new game engine, all that should get a boost along with set plays like corners and free kicks. 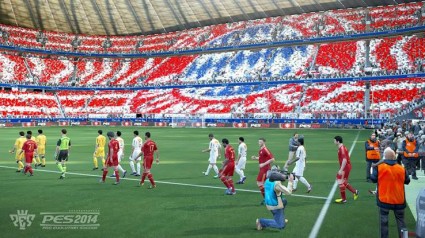 I liked being able to control one of the attackers prior to the kick for a set play in last year’s game and had some success with it, but found that the better defenders would match your run most of the time and the rest of your team mates didn’t really help too much to create space. This year decoy runs are to be added hopefully making those set plays more dangerous, like they are in real life.

The coming months will see more footage and screenshots and hopefully a playable demo of both games. My early impression is that Konami are doing more this year and maybe that is aided by the fact they are only producing their game for the current-gen consoles. The biggest challenge will be getting the gaming masses to put down Ultimate Team and give them the time to be won over.