Being a bit of a geek for both history and for videogames I must admit to being somewhat tempted by the new release: Dante’s Inferno. It is purportedly a reworking of the epic allegorical poem in which our hero Dante travels through Hell, Purgatory and Heaven, guided by the poet Virgil. ‘Reworking’ is a generous word as it is fairly plain that whatever this game is, it certainly is not Dante’s Inferno. Dante, whom you play, is now a ridiculous looking Templar Knight with a cloth cross stitched into his bare chest. Aside from the hygiene issues this presents it would not function as particularly good armour. Oh but of course, you are not reading to hear about my views on historical accuracy and anachronisms, are you?

This demo drops you straight into the action; fighting off hordes of things that rush at you but have no real clout. After what seems like ages pressing the same button over and over to kill them you are removed from this situation. I will say though, it wasn’t long before I became just a tiny bit irritated by the combat. The AI design seemed unimaginative in that the enemies simply rush towards you, and the danger is not in their weapons, or their skill, but in their number. Although when I say danger, I mean apparent lack of. I couldn’t help but think back to the retro style games where button mashing and pointing in the correct direction was the key to survival. Dante’s Inferno does not even require aim, it seems; If you press (x) and there is an enemy on screen there is a very high chance it will be taken out with no real skill from yourself.

Next I found myself enjoying the minutest bit of platforming ever. I am not going to knock the demo for its length, or lack thereof, but it was only a matter of moments before I was ambushed again. Three minutes in and I was already bored. This did not bode well. As I was now capable of destroying anything in my path (I knew which button ‘attack’ was) my attention turned to the quality of the platforming, the bits that I was presented with that is. At one point the camera angle is so bad you have no idea where your little man is. He could hurl himself into oblivion and you might never know. I couldn’t find a way to alter the camera angle, so cue more eye rolling. 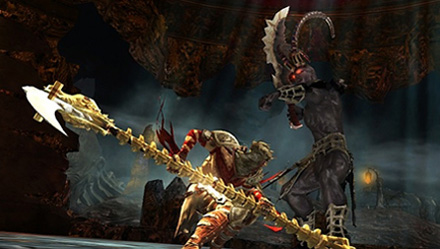 Yes, I'm not really sure what that thing is either.

The demo treats you to a boss battle; Death himself! This battle didn’t pose any real threat, although it was thankfully a little more inspiring than the combat up to this point. I was glad that it wasn’t all the same. Following this particular battle the demo takes you through the skills upgrade system, which looked like fun; I love upgrading myself. Killing the hordes and hordes of faceless baddies earns you their souls to spend on either holy or unholy skills. These skills (which mostly seem to be battle oriented) require sequences of buttons to remember in order to unleash them upon your foes. By this point I am lost somewhere between a vegetative coma and terminal inertia that recalling them in the heat of the moment just is not going to happen. I’ll stick to pressing (x).

You are then treated to a cut-scene in which you get to see your fiancee’s boobs. Great! What I will say, is that Beatrice’s knockers included, (by the way real life Beatrice met real life Dante twice and barely looked at him) the graphics, particularly in the cut-scenes is phenomenal. I mean really, really good. The animation is beautiful, and the use of light is stunning. One image (of a horse’s hoof in a puddle) particularly sticks in my mind. Unfortunately so does the rather horrifying depiction of Dante sewing the cross into his chest. While the graphics overall look stunning, I would take issue with the in-game animations. I get annoyed by a lot of things (as you are no doubt working out) and one of those is on screen sprites continuing to do their ‘running’ animation long after they have hit the wall. Clearly the developers had money in order to make this game look great, so animating the main character so appallingly smacks of laziness.

The sound is a mixed bag; one the one hand, the score works really very well, and is the sort of music I would be likely to purchase. On the other hand the voice acting is rather terrible, and very bland. Dante (who is annoyingly given an American accent) sounds like an announcer for that horrible fake wrestling. I could get bored with him very quickly. Oh, and I did.

So guess what? I won’t be buying this game, even though it is basically a mix of The Legend of Zelda, Prince of Persia, a bit of God of War and some medieval literature (on paper, that sounds just about perfect). I’d really like to like this game, but the demo was enough to really put me off; I feel it is such a wasted opportunity. I tell you there will a very unhappy Bryony if anyone ever makes a game of The Iliad and treats it with this much contempt.