As you’ve already seen from our coverage of last week’s Eurogamer Expo, id Software were there promoting the bejesus out of the upcoming Rage. In addition to our interview with the man himself, Tim Willits led a developer session celebrating the fact that id Software have now been producing games for twenty years, while also giving us a brief walkthrough of the upcoming title.

When you consider how quickly fads can come and go in this industry, along with the huge amount of AAA titles we see on a yearly basis, twenty years is an incredible achievement. Add to this the fact that id Software have produced some of the most popular and most influential titles for a generation and are regarded by many as the kings of the FPS genre; it seemed like too good an opportunity to miss.

The session opened with a quick video showing clips of just some of the games id have brought to us over the past twenty years, with a request for the audience to cheer their favourite. From Commander Keen in 1990 to Rage this year, there was a cheer for every one of the titles shown, with the biggest probably going to Doom (although Quake pushed it close).

The video clearly showed the development of the industry in terms of the graphical developments through the platforms, as the enemies become smoother and more rounded with each title. It also underlines the calibre of the team behind the upcoming title.

Before getting down to business, Tim decided to show the room an incredibly embarrassing picture of himself (with hair) and John Carmack (Technical Director) as well as two pictures of the team. This illustrated how far id have come over the years as the first shot of the original team had about ten people while the second had around fifty. We were told they did not even have everyone in it.

For those unaware of the history of id software, the presentation from Tim Willits would be a real eye opener as we were taken on a journey through the years, starting with Wolfenstein 3D. Wolfenstein is seen as the original FPS game and was released way back in 1992 on PC. 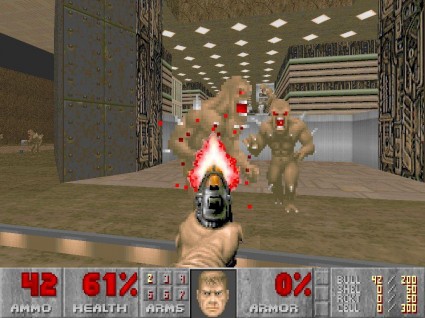 "The daddy of awesomeness"

A year later id took everything it had learnt from Wolfenstein 3D and created Doom; in Tim’s own words “The daddy of awesomeness”. Doom is still highly regarded despite being released way back in 1993 and was the first true 3D game (despite Wolfenstein’s title it was really only 2.5D in reality). Doom also introduced us to multiplayer gaming and mods, which is how Tim actually got into his job with id, as he created his own levels which he published to the internet.

Doom received its first sequel at the end of 1995 and Doom 2 was almost as revolutionary as its predecessor as it was one of the first ever retail release games to sell over a million copies. Although that pales in comparison to modern-day titles, back in 1995 it was a huge amount, and its popularity has led to versions being released for nearly all systems, from the humble Amiga to the Xbox 360.

1996 saw a move away from Doom and onto another truly groundbreaking franchise, Quake. Quake brought us Client/Server multiplayer architecture which is still used today. It also gave us dedicated websites, clans, nicknames and competitive gaming, all of which have seen their way on to consoles and are fundamental parts of how we play games today.

Quake got its first sequel a year later in 1997 and was the first time that id really tried to develop a single player story. You played a Marine named Bitterman in an operation called “Operation Alien Overlord”. An attempt to protect Earth from alien invasion. When Quake III came in 1999, it was regarded as the true successor to Quake and was also the first game that required a dedicated Graphics Accelerator. 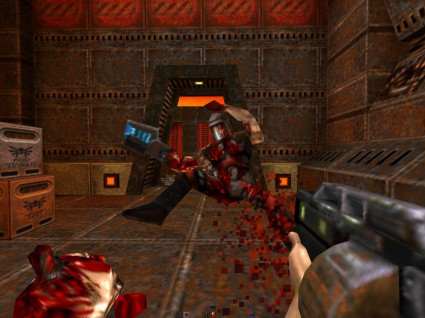 We then moved into the current century and Doom III, released in 2004 for PC. Doom III bought a new graphical paradigm and, arguably for the first time, focused on the Single Player. Doom III sold a massive 3.5 million copies making it a huge success in gaming terms.

So that was it for the past. It was truly amazing to see that one developer involved with so many of the key aspects of gaming in the modern generation. Tim wanted to show us that they aim to continue their track record of top-notch shooters with a walkthrough on Rage. Before getting started he told us that Rage will be a truly cross-platform title with the same characters, vehicles and enemies across all systems.

We were shown the Ghost Hideout level, which is the first mission in the game. However, they showed off this demo with some of the more advanced weapons that wont be available from the start to show off what the game will offer as you progress.

The world is hand-made and hand painted throughout and looks extremely good, when I thought back to those early screens of the likes of Quake, Doom and Wolfenstein it is clearly visible how far video-games have come in the past twenty years.

Tim took the very brief amount of time available to basically show off some of the weapons available, which you will build yourself in the game by collecting various items from around the environment and then putting them together.

The standard weapons are good enough but it will take a few shots to take down enemies. What you can do though is debilitate them by hitting certain areas. This was displayed by Tim shooting at the legs of an oncoming Ghost, causing it to slow down and limp but not stop its charge forward. A similar situation occurs when shooting at arms, the enemy will pause and hold the impacted area and it will affect both its movement and shot accuracy.

To the weapons then, and in true id fashion there are some thoroughly enjoyable options on offer. We were shown a Killburst, which fires six bullets to the same spot on the target causing some real damage. Better still were the Pop Rockets that explode on impact and cause the body parts of your victim to disperse all over the room. 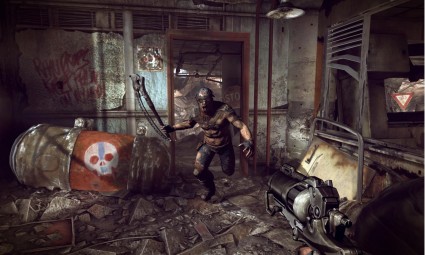 There are also deployable items like sentry bots that you can place strategically and will gun down on rushing enemies automatically when they are in range. My personal favourite weapon at this stage, though? Mind Control Darts.

Fired from the crossbow, mind control darts allow you to take possession of the target, allowing you to move him around the map, causing some confusion before detonating the dart. This causes the victim to explode in a flurry of blood and guts. Awesome!

The only other snippet we were given was of one of the secrets in-game. In homage to its past, id Software has placed a trophy in-game representing the most influential titles of its back catalogue. We saw the Wolfenstein trophy, found by clicking on a wall which then opened into a trophy room, displayed in Wolfenstein style, that you can enter to collect your prize. I have no idea where exactly the wall was and failed to find it myself in my own hands on, but it was kind of surreal to see Tim rotate the character on-screen and view old-fashioned, blocky, 8-Bit screens in one direction and the beautifully lavish world of Rage the other.

It was an all too short look at the upcoming release but enough to get me interested. So I headed downstairs to the show floor and sought it out for myself, playing through a level that required me to collect buggy parts from around the ghost hideout.

Unfortunately I only had the most basic of weapons but got a decent feel for the game mechanics. Characters A.I. seemed really good to me, as my enemies kept cover and if I fired at one side of the cover as they tried to poke out they would switch their point of attack rather than just waiting a few seconds and sticking their heads out again.

The level was fairly straight forward overall, involving you taking your character through various rooms of the hideout where you can try and surprise your enemies by getting some shots off before they notice you or have an old-fashioned gunfight. As mentioned enemies are relatively intelligent, although you do also get some of the head down, steam in types that just charge at you.

This is primarily a search and scavenge level that requires you to find the various buggy engine parts you need to build the vehicle Ray described in his hands-on, and culminates with a decent boss battle where a Ghost comes in on a tank with a mounted machine gun. You need to pick your moment to break cover and carefully aim above the weapon at the guy on top of the tank while dealing with a steady flow of regular enemies as well.

I thoroughly enjoyed the developer session and with the time I spent with Rage saw enough to put it on my radar in the build up to Christmas. For a more in-depth Hands on take a look here.