I think it’s safe to say that I have been more than a bit excited about Far Cry 3 ever since the original “Definition of Insanity” trailer. That seems like an awfully long time ago now and we have seen a steady stream of teaser trailers and developer walkthroughs hitting the Web since that day at E3 2011. These have given us a really good look at the world, the characters and the story that lies in waiting when the game finally launches this November.

This steady drip feed of information has made me increasingly more impatient for the game but, fortunately, at the Eurogamer Expo this year we were treated to a double whammy of Far Cry 3 goodness with a developer session in the company of Lead Game designer Jamie Keen, and an actual playable demo on the show floor. The way my journey down to London panned out, the Far Cry 3 Developer session was actually the first thing I did when I got there, and boy was it a good start.

The session started with the most recent Island Survival Guide video to get us going and Jamie then spoke to us about the development process of the game. The Far Cry franchise has always reached for a balance between classic FPS and Sandbox and tried to give the player a choice of how they want to play the game, and this version is no different.

From the get-go we were told that the team have really worked hard to deliver on the freedom and choice that the franchise has always pushed for, while keeping a strong narrative throughout the game’s main story. Naturally there is a big challenge in producing what is essentially an open world game to keep the player engaged throughout. We were told that the team looked at some of the biggest MMO’s and Sandbox titles, such as Red Dead Redemption, to see what they had done to achieve this.

I liked the idea of what was called the “Encounter System”, which will generate random encounters in the world to keep things different and fresh. We were also told that the development team spent a great deal of time on the Island Geography to ensure that there would be a feeling of curiosity driving the player as they explore the world, with enticing locations just off the main track designed to draw them away from the main story. 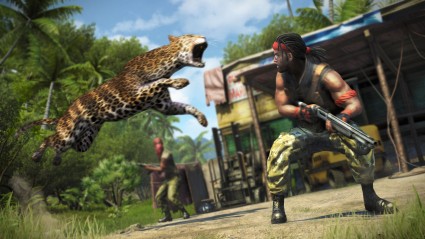 Someone forgot to feed the cat

This should all flow into a changing, evolving world, where places visited and investigated will alter the lay of the land overall. The example we were shown was that when you activate a radio tower, you will be shown various landmarks in the vicinity, designed to make you want to visit them, and Outposts will have an altogether friendlier feel once you have captured them. The Radio Towers and Outposts will also serve as basecamps, in that they will trigger off new quests and activities and will allow quick travel between them.

We also saw how the different factions on the island will interact with each other, as Rebels and Pirates can and will get into conflict with each other, potentially giving you a way into a secure area. Animals are also a much bigger part of Far Cry this time round, and the local wildlife looks set to have as big a part to play as any other NPCs; they too will conflict with other characters.

We saw one sequence where the animals were actually used as a weapon, as the players character shot out a cage holding a bear which then attacked a group of rebels. This made it easy to pick them off and take an outpost. The other aspect to the animals is that they can be hunted and used for resource, which will open up a crafting tree to develop weapons and items.

The final point covered in the developer session was the vehicles. I enjoyed Far Cry 2 and for all its flaws, it was a really well thought out and enjoyable game. In all honesty, though, the driving was pretty crap. This time out the vehicle physics have been improved and we have a much larger variety of drivable vehicles to take us across land, sea and air. 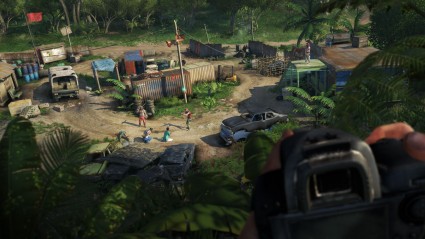 One for the holiday brochure

Out on the show floor, the demo was an open world section of the island with no set objectives to allow players to explore a little. I possibly went on at the wrong time (late on Friday) and felt I only had a very short time, although I was pretty engrossed, so it may have been longer than I actually thought. Basically, I managed to kill a couple of wild dogs and activate a nearby radio tower, and in-between had a little drive around in a car. To finish off, I ran into an outpost and just started shooting.

The handling of the vehicles is immediately much more comfortable than the last effort and the rifle I had felt nice and meaty. The overall mechanics and visuals generally seem very classy, underlined by the view from the top of the Radio Tower. The few enemies I stumbled across were actually refreshingly alert. As I came down from the radio tower, a car pulled up with two guys and, as I hid behind a car, they systematically searched the area for signs of life.

Unfortunately, my short playthrough was nowhere near enough to get any genuine feel for the game, but from what was shown in the developer session and the little time I did have to play myself, I certainly haven’t seen anything to put me off.

I’m still touting this as my most anticipated title of 2012. Roll on November!