We were recently lucky enough witness a hands off presentation on Doublesix’s latest project Strike Suit Zero. The game is still in early days of development, so it was only possible have a look at what amounted to a tech demo.

The basic premise of Strike Suit Zero was to make a game that focused solely on space combat, because the team at Doublesix have always felt that there weren’t enough games that achieved this goal. It might be true because recent efforts from other developers show that similar games ended up focusing on other aspects that deflected the focus away from the combat.

So, the story in Strike Suit Zero goes that Earth is under siege, but it’s not from extraterrestrial beings. Different factions are at war and one of them manages to get their hands on a powerful item dubbed the Relic. The enemy faction’s endgame is to use the Relic to destroy Earth. So begins the journey to save Earth by completing missions that will stop its destruction.

It might be an ambitious plan but the story for Strike Suit Zero could be a gamble worth taking. In an approach similar to the original Starfox games, it will be possible to choose different branches of progression. What is different, though, is that players must choose wisely because there are only three hours to save the planet. Therefore, in certain situations it is up to the player to decide if it is possible to achieve which objectives to tackle before time runs out. This creates a ripple that then affects the ending of the game.

Jim Mummery, creative director at Doublesix mentioned that one of the possible endings could be one where Earth is safe by destroying the Relic, but it can’t sustain life as most of it has been destroyed by missiles. The enemy missiles are just one of the main consequences in the game and it is up to players to stop them before time runs out.

Don’t think that it is easy to correct any mistakes, because it’s not possible to restart any of the missions. This is due to the branching system and the development team wanted players to feel the consequences of their actions. It is possible to continue from where the player left off, though. 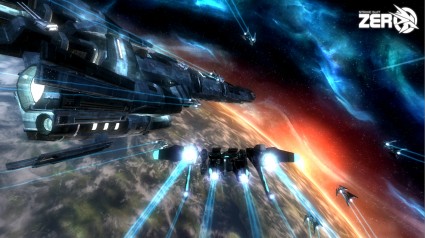 To space and beyond!

The player must choose weapons wisely as certain weapons will be more effective against certain enemy ships. Some of them allowed it to lock on to enemies and others were rapid-fire based. It’s possible to mix and match different weapons to all strike suits and there are lots of new weapons to unlock. The space craft isn’t fighting alone, though, as a whole fleet of ally ships is ready to go into battle. These ships will need the help of the player’s craft, as at times they can only get closer to enemy ships after his craft destroys enemy weapon systems.

I was able to see some of the enemy ships too, which were large. However, it’s been promised that there will be even bigger enemy crafts to take down, with further development of the game. 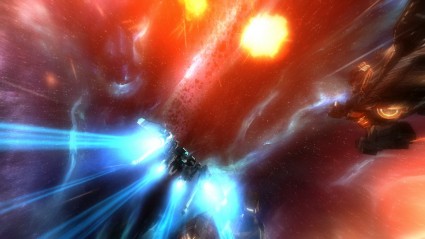 Although it wasn’t possible to get some hands on with the game, it definitely seemed easy to get adjusted to the control scheme. The space craft can be turned with apparent ease while taking out various enemy weapon systems. This is thanks to making use of two control schemes in three axis. The ship’s two transformations consist of Pursuit and Strike modes. Pursuit mode will make the ship fast and powerful, while strike mode makes it even faster and reinforces defence systems.

Now, it wouldn’t be fair to go through this preview without mentioning the amazing work done by Junji Okubo on the ship designs. There wasn’t a lot to see in the tech demo, but the ships that I could see were both rich in detail and had a futuristic feel to them. The background was also equally impressive, with a view of planet Earth under attack.

It might be early days, but Strike Suit Zero is already showing a lot of promise. Not a lot could be viewed during the demonstration, but if the development team manages to achieve everything they’ve set up to do, then it could end up being the first proper space combat game that is solely focused on the combat. Hell, even the story alone makes Strike Suit Zero a game worth keeping an eye on in the next few months.

Strike Suit Zero is slated for an early 2012 release on Steam and PSN.