Unquestionably, Batman Arkham Asylum was my Game of the Year in 2009. Rocksteady came completely out of left-field and blew me away with reckless abandon. Suddenly, it was cool to dig on the Caped Crusader once again; long forgotten were his woes with film tie-ins and cartoon spin-offs.

Now, the team what done good last time are back with Arkham City, and they’re looking to take things to a whole other level. At Eurogamer, I got the chance to see whether they managed exactly that, or if this one is more a THWAP than a POW!?

Please note: This is quite heavily spoilerific about various story elements of the game, so if you’re avoiding all talk of the Arkham City plot, please stop reading. Thanks.

The Arkham City demo began unexpectedly. A group of thugs gathered around in Harvey Dent’s mansion, feeling pretty good about themselves now that they’re causing all of this chaos and mayhem on the city streets of Arkham. Crime definitely seems to pay here, something they’ve become all too aware of. One of them is even bold enough to say, ‘It’s Arkham City, Batman would never come here…’

For the time being, he’s half-way right.

Enter Catwoman, who decides to sneak into the mansion, with the purpose of gaining access to Dent’s vault. However, before she can do that, she finds herself face to face with these steroid driven junkies. This fight scene instantly creates a real spin on play from Arkham Asylum. Obviously Batman is quick, and sharp with his counters, but Catwoman is much leaner, faster and even sneakier with her arsenal of assault, as she overwhelms her opponents with cunning stunts and dazzling acrobatics. Headscissors around enemy’s necks, cartwheels, using her whip to trip up her assailants. She seems to be all over the place, not unlike Yoda in Attack in the Clones.

After making short work of the brutes, Catwoman is free to open the vault and make a getaway. Then, after taking out the contents, and turning on her heel to leave, she finds a gun burrowed deeply into her right temple.

A quick change in scenes and you’re in control of Batman. Batman is talking to Alfred who informs him that Catwoman has been catnapped and it’s up to the Caped Crusader to rescue her before Two Face strips her of all nine lives. Stood atop one of Arkham City’s skyscrapers, looking down at the gloomy metropolis below, Batman takes a dive off the roof, and glides through Arkham City, in search of Selina Kyle.

The game controls much the same as before, except Batman’s glide is used to much greater effect, and the grappling hooks can take him higher than ever. Obviously, we’re dealing with a much bigger map than in Arkham Asylum, so travelling is going to be especially important.

We finally trace Catwoman to an abandoned building, filled with smashed window panes and broken wooden panels. It’s a real romantic spot for Dent to have his wicked way with Catwoman, unless Batman can get to her in time.

After executing some silent takedowns on patrolling goons, and using height to navigate his approach, Batman closes in on the morbid ceremony, attended by at least thirty thugs, all cheering in unison. Catwoman has been strung upside down by Dent, who is playing with a gun in his hands. Dent is ready to determine the lyrca wearing lady’s fate with the flip of a coin. 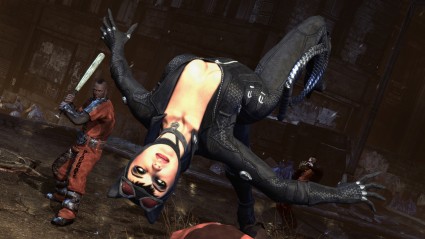 Catwoman = Yoda. An actual comparison in this preview...

Nobody steals from his vault and gets away with it. However, just as he is about to let the hammer of justice descend, Batman crashes the party and takes out the entire squadron of enemies in the process. Arkham City is still all about countering and timing, and that is especially true here where Batman is massively outnumbered. If you liked it in Arkham Asylum, you’ll love it in Arkham City.

After defeating the goons, and evicting Dent, Batman just about saves Catwoman from losing another life by getting her out-of-the-way of a sniper bullet.

Here we get to test out the Detective Mode in Arkham City. Batman assesses the entry point of the bullet from where it landed. From there, he can determine where the bullet actually came from. In doing so, he traces it to an old hospital wing on the other side of the City. After splitting from Catwoman, who clearly has her own agenda, Batman decides to investigate the origin of this anonymous sniper.

However, upon entering the hospital, Batman is confronted by Harley Quinn and a bunch of thugs who all have a gun trained on him. Harley cartwheels towards Batman, who swats her out-of-the-way, and then faces down the enemies who force him to hold his position. Once she gets back to her feet, and verbally taunts Batman, Harley tells the thugs to keep Batman glued to that spot until she comes back.

Realising he only has one opportunity to escape, Bats deploys a smoke grenade, then quickly ascends to high ground, where he now has the advantage. Unfortunately for Bats, however, the thugs have a contingency plan. There are several hostages inside the hospital wing, and all of them are held captive by each of the gun-wielding brutes that blocked Bat’s entry. One wrong move and the hostages will be dead.

At this point, the player is forced to silently takedown each of the thugs without them realising.

Using height to his advantage each time, Bats has to discover creative ways in which to neutralise each thug, whilst remaining hidden in the shadows. Two are stood side by side not far from the entrance. In this position, Bats can creep down to the ground behind them, and when close enough, execute a double-takedown, knocking their heads together! Another villain he has to take out by sneaking behind the room he is hiding in, and then pull him through the wall, pummeling him to the ground on the other side.

After showcasing his diversity in assault, and freeing the hostages, making sure they’re alright, Batman ascends to the bell tower to find out who the mystery sniper is. Much to his horror, inside, he is greeted by a horrible Joker surprise. Talking to him through a Television set, Joker tells Batman that he has rigged the tower to explode with bombs, and that he has only five seconds to get out before he goes KABOOM. The malicious tone in Mark Hamill’s voice ever apparent, there is only one chance for survival. Batman smashes through the stained glass window on his right hand side, and glides away to safety as the tower explodes behind him. 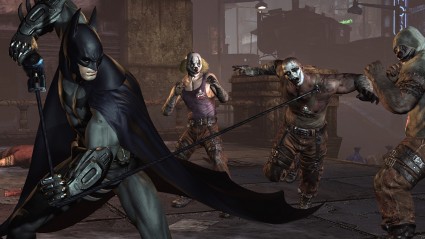 The combat is as good as it ever was...

At this point, the demo stopped, and left me on one hell of a cliffhanger. Fortunately, I was also able to attend the developer session held at Eurogamer to see some other elements of the demo we weren’t able to explore on the show floor.

One example of this sees Batman visiting the alleyway where his parents were killed. He is drawn there by the only nemesis who could possibly know about what happened that night. We were briefly shown Bruce Wayne pausing for reflection, as the tragic event played over in his mind.

We were also shown the various Riddler challenges that Batman will have to face in the game. In addition to all of the Riddler trophies we’ve come to expect from the Arkham series, Riddler has now captured a series of hostages, and it will be up to Batman to traverse various deadly obstacles in order to reach the hostage within the short time limit.

It was also confirmed that in Arkham City, Batman and Riddler will finally get to go head to head!

We were also able to see the new Challenge Maps, and watched Batman and Catwoman in action against a slew of opponents. Catwoman’s arsenal is extremely diverse, and as awesome as Batman is, Catwoman could well become a favourite for people playing Challenge Maps. Unfortunately, Robin was not being shown at the Expo.

In addition to all of that, we also got to meet Penguin, who is voiced by none other than Nolan North! With a thick cockney accent, and the bottom of a glass bottle for a monocle, the wretched Cobblepott looks as menacing as ever!

Batman Arkham City looks and plays absolutely incredibly. I must confess, my fear of villain saturation still remains, but if Rocksteady can tie all of this together in a plausible and entertaining way, then Arkham City still stands more than enough of a chance of being my Game of the Year in 2011. The extra year of polish definitely seems to have been for the best, and Rocksteady seem poised to blow our minds all over again.