I have a rule when it comes to games: If you can maim, decapitate, incinerate your enemy. Maybe leaving them on the ground holding in their own intestines while you put your gun to their head and slowly squeeze on the trigger, preferably followed some sort of an explosion where the side of their head flies off… automatically I think “this looks cool, gotta buy it!”

Yeah, I know it’s quite a shallow reason to get a game (and disturbing – Andy), but thankfully most of those games that have really horrific ways to kill your enemy are good, except that Soldier of Fortune: Payback game, which we don’t like to mention.

Now you’re probably asking yourself “what the hell has this got to do with God of War”? Well, it’s quite simple! While watching someone else play I saw him grab an enemy and then slowly twist his head till each tendon broke, the bones crumbled, the muscles tear and finally the head ripped from the body… in full HD! I knew straight away that I wanted to give this game a go.

God of War is a series I have never played; I haven’t really had any interest in it before. I can honestly say I have never even thought about buying it before I played the demo at Eurogamer.

While I was waiting in the queue, a guy was trying to beat a centaur and he was finding it very difficult. After trying for around 10 minutes and failing miserably, the pad was passed along to me. Having no clue and thrown straight into it I had to think fast. Luckily I had been paying attention and I found it easy to work out the controls. The game is relatively simple; each enemy has its own weakness and if you pay attention its usually straight forward to kill them. The weaker enemies can be killed with the basic melee attacks; whereas the harder enemies have to be killed in more specific and horrific ways.

The emphasis is on destroying everything that tries to stop you. You are, after all, fighting Gods and Titans. There are certain light puzzle elements included in the game, like using the objects in the environment to progress.

After I had killed the Centaur I used a ballista missile to hit a chariot flying in the sky, which turned out to be Helios. Moving on to the next area I had to fight my way through hordes of enemies, most of which were quite easy, and use Harpies to get across big gaps. After battling my way through them I finally found Helios being protected by several guards with shields. After trying to kill them and getting nowhere I was about to give up when out of nowhere a Cyclops came into view, so I had to divert my attention towards that. After shooting it with some arrows, I initiated a grapple style move and had to press a series of buttons that came up on the screen. Before I knew it, I’d jumped on the Cyclops and stabbed a knife through its eye. It started throwing its arms around while stepping forward. Pointing it in the right direction, I steered it towards the guards, all of which he  killed; then I proceeded to rip out the Cyclops’ eyeball before turning my attention back to Helios. 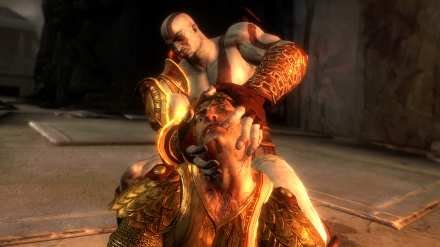 This was a moment I had been waiting for; this was the moment I got to do what I had only seen when other people were playing and this was when I would tear off Helios’ head. Using a combination of buttons and the six-axis I had to wrestle  like hell to pull the damn thing off. Light was pouring out of his eyes, nose and mouth. Once decapitated, using my new-found head to light-up dark areas and to show hidden things, I pointed the head towards a wall, lighting up where a door was that I was meant to proceed through. The action then changed. It was a nice breath of fresh air when I got to a flying mini-game. Here, using Icarus’ wings, I had to fly upwards while avoiding falling debris. Once at the top, the demo ended and the only feeling I had left was that of wanting much more.

It’s easy to become addicted to being a homicidal maniac, if only for a little while. I can say that although it is a good game, the full version won’t be for everyone and will lack longevity. It remains quite linear and there isn’t much exploring to be done so the only sense of progression with be achieved through the action and storyline. For anyone wanting this game it will probably be a one-time thing with no real reason to complete it a second or third time. I mean, how long could you keep it up?! The story will only disguise the repetitive nature of the game for so long. Nevertheless, for the majority it will be worth a play and I do look forward to seeing the finished product.