The Ninja Gaiden series has been around for almost 25 years in one form or another, spanning pretty much every platform since its debut in arcades back in 1988. Back then I used to save my pocket-money for a month and then take a bus down to Southend (from my home town, Chelmsford) for a day in the arcades and the side scrolling slash-em-up always got its fair share of my coins.

Early next year will see the third title in the series’ most modern iteration and is a direct sequel to 2008’s Ninja Gaiden 2. For the first time in the franchise history it has a new director in Yosuke Hayashi and, as a fan of the series, I was keen to have a closer look when I heard it would be playable at the recent Eurogamer Expo at Earls Court.

The playable level, based in the streets of London, sees you start atop a rather high building, looking down on the army who are out to catch our traditional hero, Ryu Hayabusa. To begin you glide down from the building into an attack on a soldier nearby, a new move from previous games and from here you go into immediately recognisable play.

With X a light attack and Y a heavy attack, you command the Ninja in what basically is a total bloodbath, stringing together ever-increasingly spectacular combos. As you go you build up a power meter of sorts, which allows you to unleash an ultimate combo. In a slight variation from previous titles, this meter is graphically displayed on your character himself as his right arm develops a red glow that grows larger and more intense with each victim. When you release the Ultimate Combo, you are given a visual treat as Ryu opens up and dismembers victims with even more precision and power than ever.

Immediately you can see that Ninja Gaiden 3 delivers visually; in fairness, the series has always looked incredibly good in my opinion, and this is no different. Ryu’s animations are smoother than ever and you can easily flow through combos, racking up double figures in no time at all. Blood fills the screen as ever making this one not for the faint hearted. 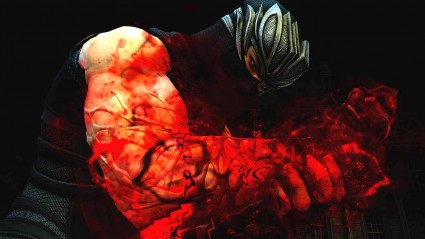 As you go through the streets, the soldiers become stronger, carrying machine guns or rocket launches and also grow in number. So, in true slash-em-style there is plenty going on. There are a couple of moments during the level where soldiers surrender and drop to their knees. Unfortunately the show floor set up at Eurogamer didn’t make hearing the audio easy, but it seems there may be an option here to let them go or, as I did, execute them.

The overall level design is very similar to Ninja Gaiden II in that it is essentially a linear experience. One of my biggest issues with the series is that you control an incredible Ninja, capable of taking and dishing out immense damage, yet it is impossible to jump over a four-foot fence. What makes this slightly more frustrating is there are some areas that require you to jump up a level, which is the same height or higher than another area that wont let you pass. Having said that, the games have always been progressive and enjoyable and this is no different.

There is an area of the level that requires you to utilise the stealth side of your Ninja ability. This is the first time I can remember that happening in the series’ history. You enter an area of smoke with soldiers searching you out, using laser sighted weapons. You have to sneak up behind them and take them out before they spot you. It works reasonably well and breaks up the more traditional gameplay through the game. 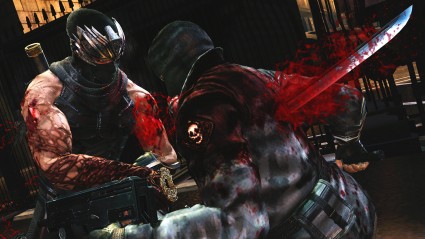 Another new skill in this version is the ability to wall climb and that was also shown off in this demo. You are required to run up the side of a building to escape the boss mid-level, by alternately pressing the trigger buttons in time with the display on-screen. Believe me this sounds much easier than it is and I was starting to get a bit frustrated at the amount of times I got halfway before losing the rhythm, when I finally cracked it.

The demo ended with a traditional, thoroughly enjoyable boss battle. What looks like a giant spider attacks you by launching fire from a distance. To defeat it you must attack its legs in turn to render it immobile. This opens up the eye which you have to jump on a ledge to reach and gain victory.

Overall I enjoyed my time with Ninja Gaiden 3 and it is fair to say fans of the series are likely to get a great deal of fun from this when it launches early next year. The downside is that there is very little new from what was on show here so it is unlikely to attract any new followers. 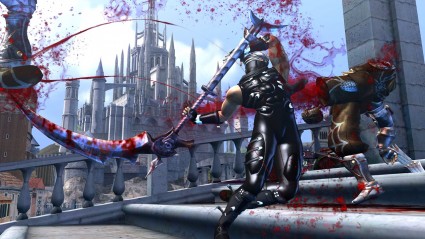 Not for the faint hearted...

I have to admit that despite enjoying it, I was a touch disappointed by this perceived lack of innovation in a title that continues to contradict itself. The way in which the levels are closed off is totally outdated and when you consider the main character and the history, you’d have thought that the developers would have been able to make this a little more realistic by now.

Having said that, what it does is continue to deliver some good old-fashioned gaming slashing, with a character that fans have come to love over the years. As one of them, I am keen to see the full release.