We all have our fits of RAGE don’t we? Whether it’s a game pissing us off to the nth degree, or if we’re in the middle of an argument with the spouse, sibling or parent? Maybe we’re just angry at someone else for being better than us at something. Whatever the case maybe, we all have those ‘Me, Hulk, Smash’ moments.

With RAGE, id Software aren’t creating a game that will allow us to relive all of these wonderful experiences in the virtual realm, but what they have given us is their first intellectual property in over a decade. With racing.

Now I’ve had some hands-on time with the game, I can tell you that they’re back, and in a big way…

As soon as I stepped out of a cryo-chamber and found myself in, what appeared to be, an alien escape pod, I instantly furrowed my brow. RAGE has been showing us barren wastelands and dingy wild-west like towns in its videos and screenshots. This was not the opening I was expecting.

Upon stepping outside, being blinded by a blistering sun and getting pounced by a savage wasteland inhabitant, however, my confusion soon subsided and it all started to fall into place.

Right from the get-go, you can see that the world of RAGE is expansive, and finely detailed. It’s also strongly story-driven. After shooting the creature off you before it tears chunks out of your flesh, Dan Hagar, voiced by John Goodman, beckons you over to his vehicle and takes you for a drive. Dan tells you that what he has just done has disrupted the balanced relations of the Wasteland, and that for saving your life; he wants you to help him in return. Your first objective is to drive to a local bandit camp and annihilate every single inhabitant. Not a single trace can be left. This is the first of many missions that will be presented to you throughout the game. Although, somewhat differently from the rest of the competition, it seems that if you fail a mission, you’ll be given something else to do instead. I guess you only get one chance to get things right.

Feeling a bit beholden to my rescuer, and trying to justify a way to satiate my blood lust, I accepted his proposal, stocked up in Hagar Territory, picking up a pistol and some ammo, and then jumped on the back of a bike and journeyed across the desert. By following a dotted white line on the mini-map in the top right hand corner of the screen, I knew where I needed to go. 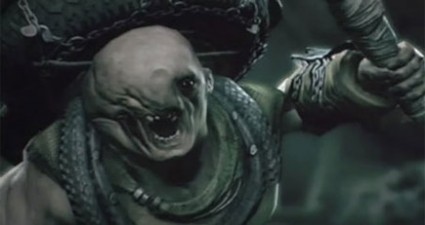 Now, here is the good news. The vehicle handling is really good. Arguably, it could be the best I have experienced in a first person shooter. Whether you’re cruising around on a bike, or in the driver’s seat of a car, you can tell that id have worked extensively on this to get the physics and feel exactly right. I know that I only got to sample this at the expo, but I’m pretty sure that the bar of ‘vehicle-handling in an FPS’ will be raised by RAGE. Naturally, a better assessment will come with more extensive game-time.

When I reached my destination, I made my way inside the cave and instantly came face to face with my new nemesis. These guys are as agile as they are ugly, and will scale the ceilings and bounce off the walls to evade your bullets. RAGE isn’t a game that’s going to make it easy for you. The enemies won’t just run at you, or duck into cover and pot shot, they’re going to fly all over the place, and pounce you just like they did in the opening segment. The A.I. seems very active in RAGE, and the enemies feel as if they will present you a constant challenge throughout, no matter which difficulty setting you choose. It’s quite a big jolt in the arm for FPS, and RAGE seems to be making much more of the environment it has created for itself than most other games in the genre. In that sense, it reminds me a lot of how Half Life 2 forced the player to have their eyes everywhere and be ready for anything. 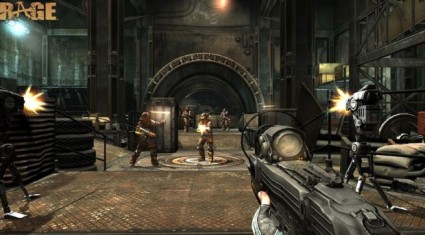 It’s not all doom and gloom if you are knocked down in combat, however. Sure, you may be on the verge of death, but this is where RAGE offers another of its unique features to help get you back into the fight. The game gives you a mini-game which will determine how much health you respawn with. You’re in control of a defibrillator, and control it using LT, RT and both analog sticks. There are two circles either side of each other, with several dots scattered around each. The game will randomly select one of those dots, and it is up to you to align the analog with the highlighted area, pressing the corresponding shoulder button before your time is up. Get all of these right quickly and accurately, and you’ll respawn quite healthily. Fuck it up, and you’ll be back on the ground, quicker than a heartbeat.

While RAGE does offer some innovative additions, such as a mission structure and a racing element, it still follows the core principles of a traditional first person shooter. That said, what I managed to get my hands-on still felt very fresh and enjoyable. While RAGE faces strong competition this year from blockbuster sequels and established intellectual property, id Software appear to be back with a vengeance, and ready to take back their mantle as kings of the genre!