The Life and Times of the SEGA Dreamcast

The SEGA Dreamcast, in many ways, was like the movie The Blues Brothers. Both highly awesome, both incredibly underrated and both never fully appreciated until after their appointed time.

That statement may actually be a little biased though: The Blues Brothers is my all-time favourite movie, while The Dreamcast is easily my favourite console of the good ‘ole days, meaning I could just be pissed about the two not getting the recognition they deserved, leading me to write all that stuff.

Come to think of it, they’re completely unrelated. Oh well, who cares.

One day I may write a fully in-depth article about The Blues Brothers, and how it led to my obsession with Ray-Bans; but alas, today is not that day. No, today we look at the beast, the one and only SEGA Dreamcast.

During the 1990s, SEGA was having a hard time in the console market. After the hands down success of the Mega Drive (Genesis to you Americans), SEGA tried to prolong its life with the FMV-ridden add-on, The SEGA CD. After that they then tried another add-on, the SEGA 32X which, while technically impressive at the time, was incredibly under-supported.

Finally they let the Mega Drive go, launching the SEGA Saturn to compete with the original PlayStation and the Nintendo 64. Unfortunately the system was hard to program for and the nature of the board design meant it couldn’t keep up with the price drops that the competition were having.

It was in 1997 that SEGA decided to put down that injured race horse and focus on something brand new; it was to be codenamed ‘Katana’.

…which was actually super secretly the Dreamcast all along!

The Dreamcast was initially released in Japan during the November of 1998. While the interest was there, it had a botched launch, since there was a major shortage in consoles. This is said to have come down to NEC, who provided the graphic chips and supposedly couldn’t keep up with demand.

It wasn’t until a year later that the Americans got their hands on the Dreamcast. Learning from the Japanese launch mistakes, they went the full nine with their ‘9-9-99’ launch campaign, which was hugely successful thanks to their downright weird, and quirky commercials.

It seems people loved the weirdness, as 300,000 Dreamcasts were pre-ordered before release, with 372,000 being sold after four days and 500,000 being sold by the two-week mark. Suffice to say that by that point, the American division of SEGA were showering in champagne and cackling wildly as they lit Cuban cigars with alight $100 bills, all while dirty peasants shined their shoes.

It was later launched in Europe on the 14th of October, and November 30th in Australia of the same year. I can’t seem to find much information about those releases though, so I guess they were uneventful and all the peasants were spared the humiliation.

The biggest selling point of the Dreamcast at the time (besides from all the SEGA game franchises) was how technologically superior it was compared to anything anyone had ever seen before (and quite ahead of its time looking back).

For example, it had an inbuilt modem and its own ISP for online gaming. Considering it was 1998, this was quite insane when you think about it. Other consoles had dabbled in online before, but the Dreamcast was the first console to get anywhere close to what PC gamers had.

Sadly, most of the servers were turned off in June 2003. Fortunately though, the Phantasy Star Online servers were kept alive for Japanese and European gamers until as late March 2007. Even though they were finally terminated, private servers have since popped up all over the web. One such example is these guys, but it looks like they’re quite strict with who they let in. Who can blame them really; turns out there are now a lot of asshole gamers on the internet, just look at Halo. 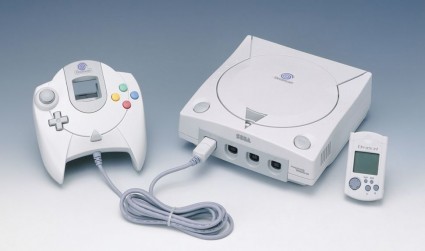 Even though the console had a (frankly) terrible controller, it had these interesting gadgets that sat in them called VMUs. The most useful feature of these (and the one I only ever used) was that it saved your game. This made it quite compulsory if you ever wanted to get anything out of your games, but also had some other interesting features. These were borderline useless and underused, but not at all harmful.

The VMU has a small LCD screen, so once you stopped playing a game on your console, you could remove the VMU and play mini-games on it if the game permitted. For example, in Sonic Adventure, you collected these small, freaky animals. Once you removed the VMU you could then look after these monstrosities while out and about, kind of like a Tamagotchi. You could also use the VMU to swap data with friends, as well as use it as a terribly shaped personal organiser.

Instead of using CD-ROMs like most of the previous generation relied on, The Dreamcast utilised GD-ROM disks. These were proprietary optical disks developed by Yamaha that had a capacity of 1.2 gigabytes, which was fairly impressive at the time as the DVD was only in its infancy around 1998. More on that in a second though.

Awesome tech is of course useless without awesome games. Even though the Dreamcast only had a two-year lifespan, there were quite a lot of hits to come out within that period. Honourable mentions include; Jet Set Radio, Sonic Adventure, Crazy Taxi, Soul Calibur, Shenmue… the list goes on. It should be noted that Shenmue was, at the time, the most expensive game ever made. I could easily write a whole article on this incredible game, and I probably will. Anything that spans four disks needs to be highlighted. 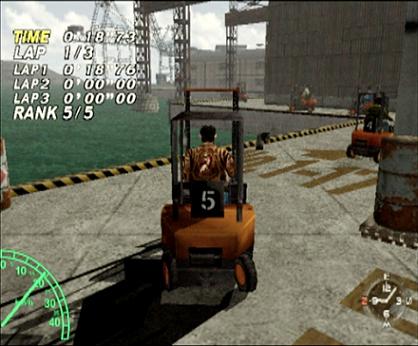 Admit it; you only ever played Shenmue for the forklift races.

To go along with a lot of cool games, the Dreamcast also had a lot of cool accessories. These ranged from digital cameras (before the Eye Toy) to a motion sensitive fishing rod for games like SEGA Bass Fishing. As well as your standard light-guns and arcade sticks, the one accessory that stands out above the rest is the VGA Box. This simple, little box allowed you to plug your Dreamcast in via a VGA connection allowing for a video output of 480p.

The Dreamcast, which was released in the late 1990s, could output a high-definition signal. Nothing special these days of course, but considering how old it is, this was quite incredible. The official SEGA VGA Box wasn’t really that common and is quite expensive now, but many aftermarket versions have been released that do exactly the same thing for a price that is a little more friendly to your wallet.

All good things have to come to an end though, but for the Dreamcast it was extremely premature.

Hardly two years after it had been released, SEGA pulled the plug on the Dreamcast in March 2001. There wasn’t really anything central that led to its demise, but instead many different variables.

For example, the Dreamcast had no EA support. Many argue that this was a huge breaking point without all their huge sport franchises, but the fact is; it did well on its own with sport games such as NFL 2K. Sure, not having EA support was a bummer, but certainly not a direct killer.

Another bummer was that the online gaming feature never really took off. It was quite revolutionary, but it wasn’t seen in the same light as it is today. Sadly, no one wanted to play console games online at the time, making sure that angst-ridden 12- year olds didn’t discover the word ‘faggot’ until a few years later.

Piracy was also quite rampant on the system. Anyone with a CD burner on their computer could burn full games to a CD-ROM, and play them without any additional hacks. SEGA fixed this with Dreamcast systems released right at the end of its lifespan, but it was too little, too late. Even that fix could be bypassed with a burned launch CD that had a software hack on it.

Probably the biggest variable in the Dreamcast’s final demise though, was the Sony PlayStation 2.

This black, death machine was announced in March, 1999, and released October 26th, 2000. The PS2 was quite similar to the Dreamcast technically; they had comparable graphics, (eventual) online functions and the processor chips were fairly equal. The PS2 had a trick up its theoretical sleeve, though; it used DVDs. Seems underwhelming now, considering you can buy shitty movies on DVD for $2 at your local grocery store, but this was the early 2000s. DVDs were a very new thing at the time, and Sony adopting it in their shiny new monster was quite ballsy.

Besides from being technically better; 4.7 gigabytes of storage compared to the GD-ROMs 1.2, and the fact that you could play movies on them was a huge innovation. Never before could you watch The Blues Brothers on your console… This sparked an interest for DVDs in Japan, and then by default everywhere else. At the time, the PS2 was the cheapest way of playing DVDs, which made it a very easy purchase.

PS2 took over the market, causing SEGA to discontinue the Dreamcast, as well as pulling out of the hardware market altogether. It was a very sad thing to happen, but at least SEGA ported its games over to other platforms so ass-kicking franchises could live on. Case in point, it only took until July 2001 for Crazy Taxi to see a PS2 release.

Even virtual Yukawa-san thought it was bullshit.

Luckily though, there was life after death. For some reason, it’s reported that some retailers in Japan were still stocking the humble Dreamcast until 2006. I can’t find a solid reason as to why, but an educated guess would be that it was leftover stock that had lasted that long. It is said that when the Dreamcast was discontinued, there was a huge back-catalogue; which is why you’ll regularly find brand new Dreamcasts still sealed in box on eBay.

Surprisingly, games are still being developed for the wonderful grey box as well. Not AAA releases from known studios, but instead indie developers, mostly creating Shoot ‘em ups (SHMUPS). One such example is GunLord, by developer NG.DEV.TEAM, which was released last year. People buy these too, they aren’t just some sort of novelty. This proves that the Dreamcast could have lived a long official life if SEGA hadn’t canned it; the fan base is and was obviously there.

Looking back now, you can really see how ahead of its time the Dreamcast was. From online play to HD graphics, the Dreamcast had it all. These days you can pick one up for a decent price, and I sure could recommend it to a friend.

They say the best die young, but two years was just ridiculous. You’ll be missed, old dog, but you live on in history as something special, and in the hearts of all SEGA fanboys and retro enthusiasts.

I'm primarily a pants person, but shorts are slowly growing on me.