Team Talk: Is there a future for motion controls in gaming?

Is the future of motion gaming brighter than the glowing end of a PS Move wand? Should we wave goodbye to Kinect? Should we ‘Wii’ on Nintendo’s controller-waggling ways?

See what I did there? Anyone? What do you mean that last joke was old when cavemen roamed the earth? No wait, come back! Join the TIMJ team as we discuss the world of motion gaming. The bad puns are all above, I promise…

I’m going first this month, for a couple of reasons: one, because I compile this article so I can (not childish at all…); two, because I need to use this as a bit of an article foreword too. When I decided upon this choice of topic, it was a knee-jerk reaction to Microsoft announcing that Kinect was no longer mandatory for the Xbox One and the possibility that this might mean a continuation of the current gen approach to motion gaming, which mostly seems to be making a sports game (usually okay in fairness; I enjoyed Sports Champions), or something that was hugely limited and basically crap. In fact, I’m being too kind to myself here. I was expecting a barrage of responses along the lines of “motion gaming’s garbage, a waste of time and money”, and I was pretty on-board with that.

Now I’m lucky in that I get to read what everyone else has written before I do my bit, and on this occasion having had a good amount of assistance from my colleagues and time to reflect, I’m happy to say my initial knee-jerk reaction was wrong. Looking at this more long-term, motion gaming surely has a huge future in some form or other. Surely it’s only a matter of time before MS nails Kinect, and we have something spectacular on our hands, and combine that with something like Oculus Rift and there are some pretty exciting prospects out there. It may not happen during the lifetime of the PS4 and Xbox One but it’ll happen.

I absolutely can’t finish without mentioning Special Effect. These guys take current technology and make it do some amazing things, but improvements in motion control could have far-reaching results for them. So taking the “what can it do for me” blinkers off for a second, just think how motion gaming could help people less fortunate than you or I.
Now I’ve totally blown my own word limit, so I guess that’ll be me on tea duty for a while!

The key thing is to find what motion controls can do that normal controls can’t. I remember when people used to laugh at analogue sticks on controllers, but guess what? It turns out that using an analogue stick gave you more control than a D-Pad in certain circumstances. 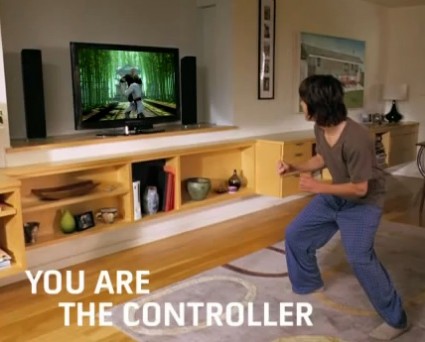 What can possibly go wrong?! Oh…

Andy Corrigan (Site Editor)
While I have absolutely zero interest in the type of full-body gaming that Kinect or Move provide (though, I have dabbled), I still think it’s foolish to outright dismiss the benefits of motion control. There are many types and degrees of motion control, and success simply comes down to the talent of the development team at the helm.

Personally, though, I tend to enjoy motion control more when its implementation is subtle and enhances the traditional experience. For example, when playing Uncharted: Golden Abyss or the Killzone: Mercenary preview, I can’t imagine not using the Vita’s gyroscope to subtly adjust my aim. Likewise in Killzone 2, having the Sixaxis play a part in keeping your aim steady during sniping was excellently played out. More intensive usage is also fine providing that it’s done right. Skyward Sword would simply be a weaker experience without its dynamic swordplay; playing Mario Kart without steering with the Wii-mote simply isn’t as fun, same for FORZA 4 without the wireless racing wheel I reviewed last year.

Regardless of how well these things are implemented, though, I think we can all safely agree that it’s never okay to use motion control to prevent a virtual protagonist from falling from a log. Ever.

Adam Botha (Contributor)
My concern with Microsoft’s Kinect announcement is that it removes much of the incentive for creating great motion-controlled gaming experiences. While there’s still unexplored territory there, it might be difficult to convince developers to commit resources to motion controlled designs because there’s no longer a real requirement for them to do so.

It’ll likely be a better business decision for most developers to spend time and money on ideas that are proven and popular rather than something that has a reputation as being primarily a gimmick and is still relatively untested compared to traditional input methods. Between the Wii U’s shift to a focus on tablet gameplay and Microsoft’s announcement, motion control implementation is no longer a priority for the next generation of consoles.

I think there’s still a lot of room for great motion control experiences in gaming, though. The Wii provided a lot of fun, unique gaming experiences that wouldn’t have been possible without motion controls. There are also dozens and dozens of games that made half-hearted attempts at incorporating motion controls and suffered as a result. I don’t think bad motion control implementation in some games inherently devalues the entire concept, though.

Must… resist… immature… joke… about… shape…

Neil Hughes (Site Manager)
I love the idea of innovation and using technology to make things better but I must confess to being a lazy and grumpy gamer who returns home from work and has no intention of re-arranging the living room so I can jump up and down like a maniac.

We were promised diversity but ended up with dancing, keep-fit games and popular titles with tagged-on voice features that don’t recognise regional accents. The bottom line is we are not quite in the gaming utopia where your actions are more accurate than pushing a button yet, so you just end up with a frustrating experience.

Although I have no doubt we are on the verge of something special, motion control gaming currently feels very gimmicky, which is why most of us only use at Christmas parties before those games are packed away for another year.

There are clearly many benefits on the horizon with motion controls but I don’t think even these will ever completely replace the accuracy of a humble button.

Neil Hickton (Podcast Producer)
I recently spent some time with charity Special Effect (Note from AndyB –click here for Neil’s article and interview from the visit) and it’s clear that improvements in motion control could be the difference between people being able to join in a game and not being able to play at all. Of course the main problem is that motion games are generally poorly devised and wouldn’t be suitable for disabled gamers anyway, at the moment.

I’m for motion control, but developers need to be sensible with what they expect a person to do to make it actually work.