The Art of Video Games Exhibit

During the weekend of March 16th, the Smithsonian American Art Museum opened its first video-game-centred exhibit. The Art of Video Games is a sixth month installation which focuses upon the industry’s evolution over the past forty years.

I was lucky enough to attend the opening weekend celebration called Gamefest; a fast-paced, three-day event with panels, live music, movie screenings, and plenty of souvenirs.

The experience was somewhat surreal. For those present, there were two states of mind: incredulity, that this was actually happening; and feeling vindicated that the event had finally happened.

For many gamers, who have long held out for the recognition of the medium as a serious art form, seeing video-games aside contemporary works of art was a dream come true. It was the moment of satisfaction for people who had been looked down upon for for their passion for years. After four decades, video-games were either getting their due, or had finally reached the level of worth that allowed them the privilege.

However, the guest speakers who visited during the opening weekend certainly didn’t think video-games are done evolving. These gamer gods, a group which consisted of the likes of Ken Levine, Kellee Santiago, and Rand Miller, spoke of the importance of improved story-telling in games, the need for more diversity, and they encouraged the audience that becoming a part of the industry isn’t just possible. It’s very possible, for any gamer with the determination and passion to try. 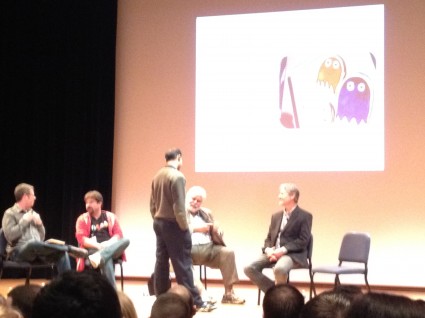 Over the course of many hours, these mighty figures discussed their methods, their histories, and their thoughts on the industry, bringing up many fantastic points and arguing over them amongst themselves. If there was anything these dreamers agreed on, however, it’s that games need to become more immersive, and more focused upon story and art as the industry goes into the future. That said, Paul Barnett from Bioware Mythic asserted his belief that games should be awesome first, art second.

Walking around the exhibit gave one a clear view of just how diverse the gaming community is. There were people of all races, genders, and ages, gathering together to appreciate years of history. Seeing this brought home the true meaning behind the event; games are no longer a niche which only some enjoy, and which is ignored by the larger population. Video-games are now a universally appreciated source of entertainment, even an art form.

The exhibit itself consists of four or five open rooms filled with monitors and TV screens. Some feature pre-made videos of interviews with designers like Jesse Schell, Warren Spector, and even voice actors such as the illustrious Jennifer Hale, playing on repeat.  Others allow viewers to play the original Super Mario Brothers 3 and Pac-man on giant screens. Further in, dozens of small screens show short documentaries on the games on the museum’s list, with concept art hidden behind protective glass and lining the walls. 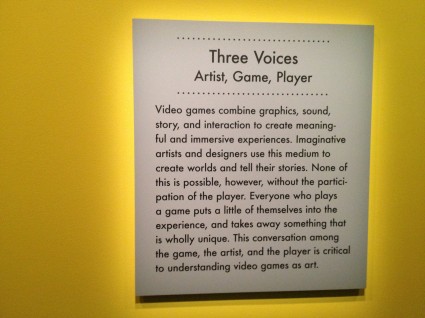 The plaque which greets visitors when they first enter the exhibit.

This list includes everything “from Pac-man to Mass Effect”, as the advertisements say, and that’s right on the mark. Over eighty different games fill the exhibit, from various eras, genres, consoles, and companies.

For most gamers, the event is not exactly revolutionary. The information provided is rudimentary and accessible to anyone with a computer, and the games themselves can easily be played at home. Those expecting a large, in-depth look at the games presented will be disappointed, as each game only receives a small blurb within the exhibit itself. The games which receive the most attention (Uncharted 2: Among Thieves, Mass Effect 2, Flow), still receive limited time.

However, for those who know nothing of games, who haven’t played them or considered them as being anything other than toys, this exhibit will be mind-blowing. Each video-game is presented as any Rodin or Da Vinci would be; as if they were art.

Taking parents or loved ones who don’t consider video-games seriously to see this event might just open their eyes to what they’ve been missing. The amount of games there and the worth assigned to each one must be staggering to someone who has never been awed by the power of a game’s immersive beauty. 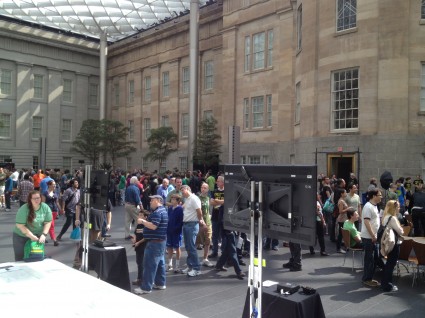 This crowd is nothing compared to the line to get into the exhibit...

To the world at large, this modest exhibit stands for something much greater. An art museum has included an exhibit about video-games. This isn’t an intra-industry event, or something removed from the public eye. This is recognition being given by people ‘outside’ the industry, people with a lot of clout. That means something.

Though the exhibit itself is small and somewhat modest, it is what it stands for that truly matters: the first time video-games have been honoured and held up as a legitimate medium. As Chris Melissinos, guest curator of the exhibit, said on opening day: this is a very important moment in video-game history.