When I talk about Crush in this review, I’m not talking about some pulped form of orange juice, an old-school wrestler from the 80’s or a classic Megadeth song. I’m talking about a remake of a 2007 PSP game by Zoe Mode.

What’s different this time around? The game is able to make full use of Nintendo’s revolutionary 3D technology, and considering the game is all about exploring the third dimension, this would seem like a dream fit.

Were my hopes dashed, crumpled, and ultimately crushed?

Hello, I’m Danny and I’m a Crushaholic
The protagonist of this game, Danny, isn’t some Bruce Banner scientist chap who gets contorted and twisted into a green hulking menace that runs roughshot all over town. Actually, the dude is a bit of a weed, with black onyx eyes and a cute little fringe, and he looks about as capable of crushing something, as my frail aunt Flo (Important Disclaimer: I don’t have a frail aunt Flo, but if I did, she’d be frail…).

Our would-be hero, but more-likely paperboy who earns £2 a week from his deliveries, has become a victim to the science experiments of a rather batty, yet seemingly well-intentioned professor. Sadly for him, Danny hasn’t been given a cashpoint which prints legal tender to become a multi-billionaire, or a vial of liquid that looks like piss but actually tastes like tropical fruits, and allows him to travel through time. Nope, he isn’t so lucky. Instead, he gets lumbered with a machine which traps him in his own subconscious, enabling him to work through any emotional issues by the means of puzzle-solving.

While the Doc helps Danny with some tutorials to begin with, it soon becomes clear our intrepid black-eyed pea needs to rise up and confront his emotional baggage alone, even if it does take the shape of cockroaches, bowling balls and coke cans. 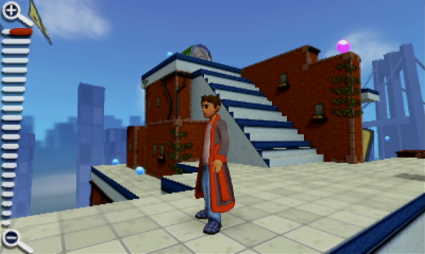 Is it just me or does Danny look like Arthur Dent?

We built this city on stereoscopic 3D
I think it’s fair to say that you won’t have played anything like Crush 3D before. Even though it does a good job of blending genres together and merging concepts, the approach is actually pretty fresh.

On paper, it’s a pretty bog-standard platformer. Danny can jump, he can push things, and needs to collect marbles in order to unlock the exit. What’s different is that this platformer requires you to utilise both the 3D and 2D environment in order to progress through the level. This is achieved by ‘crushing’. With just a stamp of his foot, Danny can change a fully 3D environment, into a squished 2D landscape.

The player can adjust the camera around Danny, from top down to side-on views, and can crush the level in that direction. So, if you’re stood on a platform in the 3D World, and you know there’s a ledge above you, but no amount of jumping will enable you to reach it, you can arrange the camera so you’re looking down on Danny, press LT to crush, and suddenly, the platform Danny is standing on is now directly adjacent to that ledge.

Then there is the puzzle solving aspect of the game. Throughout the levels, Danny will encounter items that initially appear to be obstacles, but can actually be used to aid his progress. Push a bowling ball, and you can jump on it to get a bit of leverage to a platform out of your reach, or squash enemies that obstruct your path.

Crush3D forces you to think outside of the box. This doesn’t boil down to generic lever-pulling, you’re really going to have to study your environment, work out how crushing can be an advantage, as well as a detriment, and try to find a safe exit.

Unfortunately, while all of this sounds quite wonderful, some of the later levels can be really off-putting, especially for the completionist. Each level is filled with marbles, one almanac and one trophy. Trying to get all of those to unlock everything in the game can sometimes prove to be more hassle than its worth, and it becomes all too tempting to repeatedly tap the Y button for hint after hint just to get through to the end.

Naturally, you want a game of this type to be difficult, but you will find yourself increasingly aware of the fixed routine and style in Crush3D. Once you enter that rhythm, the game’s nature becomes quite predictable, and you’ll notice what a shallow experience it actually is. 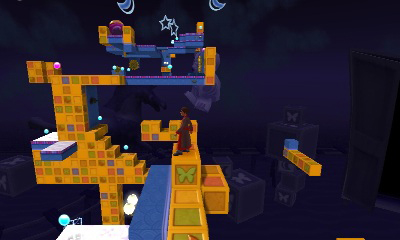 Make use of that pretty slider
On the outside, Crush seems pretty cutesy, tootsy, with its comic book narration style and doughy-eyed character set, but there are actually some sinister tones at play here. Danny’s fears make up a large portion of the game, and facing these in such unlikely environments makes the whole scenario seem all the more unsettling.

The game looks really quite wonderful in 3D, and is fully suited to Nintendo’s handheld. The effect can actually work to your advantage, helping you to see the distances between jumps, and how to make better use of the environment, but it certainly isn’t overstated or essential to the game’s completion. As such, Crush3D is an immersive 3D experience, that doesn’t just try to cash in on 3D as a gimmick, but actually utilises it as a means of playing a game constructively. Something, I can only otherwise say of Super Mario 3D Land.

That said, sometimes increasing the 3D effect of Crush3D actually makes the game look worse. It’s quite clear that Crush was initially built and designed on a 2D system, and when trying to change that, some of its charm and finesse can be lost.

Infiltrate the inner psyche
I can’t say the music or sound effects in Crush3D are particularly memorable. In fact, it’s one of the few 3DS games I’ve played with the sound down. It’s not that they’re especially bad (although some of the effects seem as if they’ve been cherry-picked from the world’s most overused sound catalogue), but I found myself more attached to the game when I played in utter silence.

Perhaps that says something about my inner-self? I don’t know. Either way, I found the solutions to the puzzles came much more naturally to me in this state, and I had a better time with the game as a result. 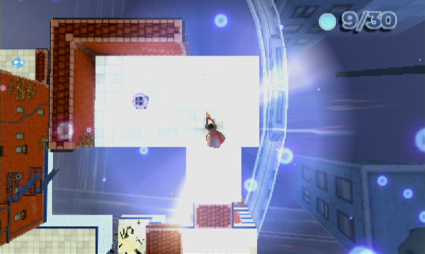 I will CRUSH YOU!

3D me.
While it seems that Crush3D is a unique title that plays unlike any other member in the platform family, with puzzles that truly challenge and a large amount of content, it eventually exposes itself for more weaknesses than strengths. Once you let-go of rational thinking, and allow the game to absorb you into its fully-formed 3D universe, Crush3D becomes a victim to its own rules and conventions, and, sadly, for a game that initially dares to be different, becomes all too familiar with the genre it is so desperately trying to enhance.