Black on the PS2 and Xbox was a cult classic. Full of thrilling gunfights, top-notch graphics and audio, and previously unparalleled environmental destruction, it brought something new to the table for the first-person shooter. Through a different developer, but with some of the original team still present, the game has finally found its spiritual successor: Bodycount.

Whether it can repeat the triumphs of its predecessor is another matter. Rumours of many of the original development team jumping ship part-way through, and the recent announcement of the studio closing, do not bode well. Read on to find out if Bodycount is guaranteed to make a killing in shops, or if it has in fact massacred its respectable heritage.

Back to Black
You are the Network. The Network is you. These two baffling sentences effectively sum up the storyline of Bodycount: utter tosh. Of the few main characters in the game, none receive any more development than could be summarised in a few words. Meet the faceless and forgettable protagonist referred to only as ‘Asset’; he is a goody. Every goody needs a baddy, and for this role we have Nemesis, a contrived villainess equipped with a little too much cheesy dialogue and lipstick.

An even less sympathetic character is the mysterious voice from the Network that talks to you throughout the game. Characters don’t necessarily need a physical form to make an impact (just look at GLaDOS through the majority of Portal), but a personality would have been appreciated at least. 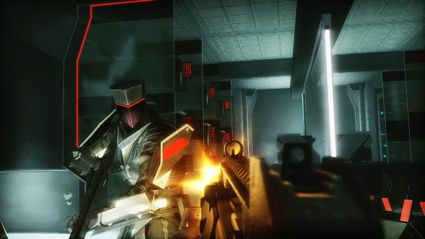 Bodycount’s plot consists of you travelling the world under the service of ‘The Network’, in search of ‘The Target’ (who the hell thought all this up?). Along the way, you’ll get involved in some barely explained conflicts and stumble upon top-secret Target ‘Nexus’ bases, all of which have a habit of blowing up; a bit predictable by the third instance. Overall, exposition is limited, and held together with less cohesion than the dilapidated asbestos ceilings in my old run-down secondary school.

Make it count
Bodycount is one of those games where you shoot things; you may have encountered such games before. If you have, there is little that you won’t have seen already, and those past examples will have probably been better. For starters, it may just be my preference for playing shooters on the PC with mouse and keyboard, not to mention my deep loathing of the PS3’s Dualshock 3, but the controls feel terribly imprecise and unwieldy.

A first-person shooter would be nothing without its enemies, but the A.I. of Bodycount is astoundingly mediocre. Foes are often oblivious to your presence, and exhibit some perplexing habits. Frequently you will find them posed rigidly like action figures, facing in the opposite direction; they seem to possess the mindset of a child that thinks ‘if I can’t see them, they can’t see me’. At times they also choose to adopt the opposite tactic, running up-close and staring you down, apparently with no intention of shooting. 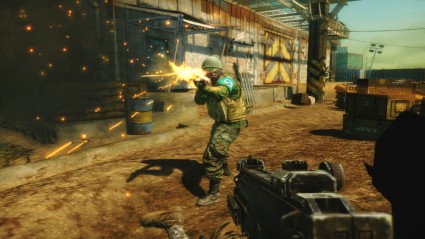 Superb accuracy soldier. If you were aiming for someone to the left of me, at least

In stealth missions, enemies are completely unfazed by corpses of their comrades scattered around, choosing to go about their normal business regardless. Less a problem with intelligence, and more an issue of sloppy design, is their spawn patterns. Spawning is astonishingly obvious at times, with adversaries stealthily materialising behind you, or even vanishing and re-appearing in plain sight.

They may be absolute numbskulls, but enemies do have the phenomenal talent of throwing a grenade in the opposite direction (often seemingly not even lifting their arm to do so), yet it still homing-in and landing at your feet. That said, they’re just as likely to save you some hassle and drop it at their own feet instead.

Killing foes in Bodycount makes them spew out numerous multi-coloured pickups like a piñata, which is quite a jolly thing for them to do, when you think about it. These pickups represent intel, oddly enough, and even more bizarre is that collecting intel fills up a special ‘OSB’ meter, granting you invincibility and airstrikes, amongst other bonuses. In all honesty, the invincibility power is the only truly useful one, the majority of the time.

Levels are simplistic, with environment and objective design harking back to a console generation or two ago (flick switch A to get through that locked door; flick switch B, C, D and E to disable a self-destruct sequence). This is far from its biggest sin, however; I was gobsmacked to discover that it regularly recycles rooms, and sometimes entire levels. Such design laziness is absolutely inexcusable in this day and age.

It’s not entirely doom and gloom, however. The selection of armaments available throughout the game has some satisfying inclusions. Grenades and mines are in plentiful supply, and when skilfully deployed, can eradicate whole teams of enemies in a captivating eruption. Environmental destruction has also been passed down from its predecessor, albeit a less innovative addition by today’s standards. Nonetheless, it offers some great tactical opportunities, and is endlessly entertaining to boot. 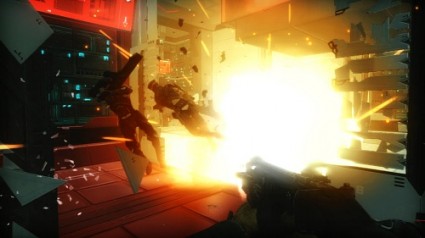 DIY interior design at its finest

Where Bodycount really shines is in the numerous situations in which you have to defend an objective or survive until extraction, against hordes of assailants thrown your way. The action gets seriously claustrophobic and intense, forcing you to dart between rapidly deteriorating cover and use absolutely everything at your disposal to thin out the enemy’s ranks. These sections of the game are, without a doubt, where you will use the most ammo, OSB powers, respawns and swear words; not necessarily in that order.

Everything needs a hook to set it apart from the rest, and the gimmick of Bodycount is its scoring system. Instead of promoting spraying-and-praying like your analogue trigger is duct-taped down, the game instead rewards you points for killing with style, like lining up head shots or taking down foes with explosions. A combo meter increases as you pull these off several times in a row, which multiplies your score exponentially.

As the combo meter doesn’t deplete over time, this scoring system encourages slow, methodical and defensive gameplay, with careful aiming and tactics. Play Bodycount like Call of Duty, and you’re probably doing it wrong (unless you’re naturally gifted). It’s a very satisfying element of the game; I found myself getting absorbed into the inflation of my score, often managing to sustain a single combo throughout the majority of a level, receiving a complementary ‘A’ grade for my efforts. 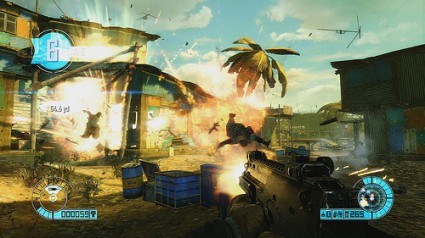 Unfortunately, however, although the scoring system is arguably the most compelling aspect of the game, it’s an entirely superficial constituent that does little to truly influence gameplay. It’s definitely one of Bodycount’s saving graces, but the lack of real integration makes it seem like a tacked-on afterthought in an attempt to add depth.

All in all, the campaign is a decidedly amateurish affair, even if it’s not a complete train wreck. It’ll take you around six hours to reach the obligatory-yet-unsatisfying final showdown with Nemesis, and by this stage you’ll be quite happy to see those credits roll and get on with something else.

If looks could kill
Bodycount looks graphically like a PS3 or Xbox 360 launch title at best, but is still plagued with frequent frame rate dips nonetheless. Whatever it lacks in technical solidity, however, it makes up for in style; even if it is a wacky, slightly plagiaristic style. The visuals consist of a conflicting mash-up of African, oriental and Tron-esque sci-fi. It doesn’t really make much sense, but then again, little of the game does. 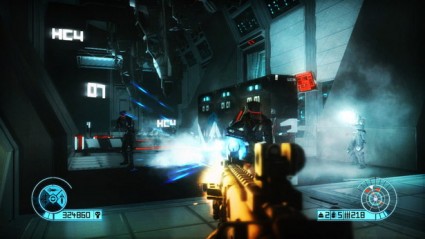 Taking things to the Nexus level

Characters have a slight cartoonish appearance, reminiscent of a toned-down Brink. What’s refreshing is the mildly adventurous colour palette displayed on-screen. While it is all too tempting for developers to plaster first-person shooters in murky shades of brown and grey, Guildford Studio have generously supplemented these staple tones with much more appealing hues. The futuristic Nexus settings are awash with neon highlights, whereas real-world locations are adorned with brightly painted buildings and colourful embellishments.

*Bleep-bleep-bloop-bzzzt*
Once again, style over technical substance is apparent in Bodycount’s audio. Although far from breathtaking, the background music is entirely atmospheric and appropriate. It’s when too many sounds are playing at once that the cracks start to show. BGMs frequently run into each other, in a staggeringly jarring and ridiculous manner. It’s as if the developers couldn’t decide which tune would be more suitable for certain situations, so opted to just play two at once instead. I swear I actually once heard three different tracks playing simultaneously.

Sound effects are delightfully gratifying at least, particularly the chirpy retro beeps that accompany the collection of intel. When these combine with the themes merrily blaring away, however, it all becomes too much for the engine to handle; the audio suffers pronounced slowdown and distortion. I cannae do it captain… I just don’t have the power!

Ain’t no body
It seems to be the unwritten rule of first-person shooters that a multiplayer mode is essential, no matter how half-arsed the implementation. Guildford Studio have taken this to heart, and delivered a particularly mediocre offering. Whereas the awkward-yet-serviceable shooting transfers nicely and delivers something that is inherently playable, the dearth of maps, modes and character progression means the feature has less meat on it than a catwalk model that’s skipped breakfast. 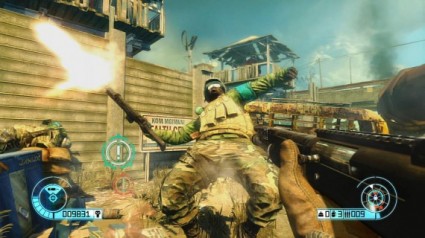 Something that is also sorely lacking is the presence of anyone else to actually play the bloody thing with. This is unsurprising considering the presumable commercial flop of the title, and that after a round or two, the people who did buy the game probably just went back to CoD. A Co-op mode lets you team up against endless swarms of enemies, but you’ll be bored of that in no time as well. Just like I am, of writing the review of this game. Onto the conclusion…

Out for the count?
Bodycount’s retro action-arcade feel, clichéd styling and overabundance of explosive barrels give the impression of Time Crisis taken off-the rails. This isn’t too much of a problem in itself, but the main concern is that it carries a similar RRP to a full retail release, yet has the production values of a budget downloadable title like the Section 8 series (or perhaps even worse). For that reason, I’d advise that you don’t even consider a purchase until it has a suitable price to match. Believe me; with the line-up of competing games this autumn, it certainly won’t be long until that’s the case.