Crimson Alliance pitches itself as an Action RPG, and is listed on XBLA Marketplace as free. It is developed by Certain Affinity, who may have only been going since 2006, but thanks to the fairly unique nature of their set-up, boast some of the most experienced and talented developers in the industry. None fit this description more so than founder and Creative Director Max Hoberman, one of the main men behind the juggernaut that is Halo.

That kind of pitch suggests that passing up on it would be nothing short of folly, right? Read on to find out.

If God was a woman
Crimson Alliance is set in the town of Byzan, a port on the edge of the Dead Sea, which has fallen from grace. This is all thanks to a rather nasty episode that occurred after the throne was taken by a young princess named Asturi. As with all women it seems power went to her head, and she decided to seduce the Magus who acted as her aide, in order to learn his secrets and abuse his ability. Having had her way, she locked the poor old fella up, and made him watch as she used her new-found power to practice black magic, sacrificing the souls of her detractors for that other female crux, eternal youth.

Byzan is now populated by the Gulyabani, who worship Asturi’s form, the Soul Siren, and perform various rituals and sacrifices to keep her happy. It is therefore up to you to take charge of either Moonshade, Gnox or Direwolf, as this unlikely crew try to restore some form of order and battle the evil one.

Bleeding Gulyabani
In the free game you can create one character in any class (Assassin, Mercenary, Wizard), and play through a small portion of the game only. Characters can be renamed from their default, which will hold once you purchase the class (800MP) and unlock the rest of the story.

Each character class has a slightly different skill set, which means the controls do something slightly different depending on which you choose. The basic fundamentals are the same, however; A is a dash move used to avoid, Y stuns your opponent, B and X are used to attack, and RT is a block move. The left stick moves your character while the right stick rotates them, allowing you to face one way and move another; a handy tip in some of the bigger battles.

Explosive barrels for the win!

As you progress through the various levels you will face a number of different enemies, all after your blood, and will need to use these skills to beat them. All levels contain a number of hidden areas, which will reward you with a large amount of gold or a treasure chest (or both if you’re really lucky), and an additional secret area which will only be accessible to a specific character class.

You will also find some treasure chests, which might contain weapon or armour upgrades. These give the game an RPG element, and can then be equipped in the inventory menu by pressing the ‘back’ button. Upgrades can also be purchased from merchants between levels, and will improve your abilities across the attack modes of your chosen class, with armour improving your defence.

Crates and pots dotted around the world can be broken to reveal more gold and hearts which replenish your energy, and there are also a number of consumable items which you can assign to your D-pad and deploy with RB. These are primarily weapons such as throwing axes or deployable turrets that will assist you in battle, but also include a ‘Healing Totem’, which once deployed acts as a beacon, continuously restoring your health for a period of time if you’re stood close enough.

There is one additional collectible to be found around the world in the form of Soul Anchors; these are basically medals that unlock an Ultimate Power when you have a certain number, performed using the LB button. The Ultimate Power uses energy collected from kills, so once used, you have to allow it time to recharge. The more Soul Anchors you get, the more powerful your Ultimate Power, and the longer it takes to restore.

Paul Daniels, eat your heart out!

Finally adding itself into the mix of gameplay are the puzzles; these will often require you to stand on platforms that trigger switches, or hit a number of things in a certain time. As with the secret areas, playing alone is a hindrance here, as you won’t always (read often) be able to complete the puzzle alone, even if you know exactly what you need to do.

Red sky at night
The visuals in Crimson Alliance take me back to my gaming youth, with the isometric 3D view of some of the classic arcade titles of the 80’s and 90’s. It isn’t something we see too often these days, so it actually gives a fairly unique feel to proceedings. The downside is that you cannot rotate the camera, so you will often find yourself hidden behind a wall. This is countered by walls becoming invisible, or more often than not, your character’s image becoming something of a coloured shadow, as if viewed through thermal imaging equipment.

The overall tone of the game is that of a graphic novel, with what I can best describe as a grown-up cartoony effect. The main characters are extremely well drawn, as are the enemies, and in general the world itself is well crafted, colourful, and really fits the fantasy style of the game.

On the negative side, I have noticed numerous occasions when the frame rate has dropped as soon as the screen gets a little bit busy (which can be quite often). This doesn’t overly detract from the experience, but is quite annoying and a bit of a pet hate of mine.

Scarlet percussion
Music also follows the fantasy style, with a good mix of background music through the differing levels. It is quite varied and moody at times, and follows the action on-screen in tempo as well as volume. By this I mean that, overall, the sound is quite subtle, and sits firmly in the background. There are even some periods of silence as you explore, which actually adds to the feel of the game in a way that I haven’t experienced all that often. As you progress into areas of concern or long running battles, the music echoes the tension on screen by increasing in volume and intensity, and then it drops off again when you clear the area. 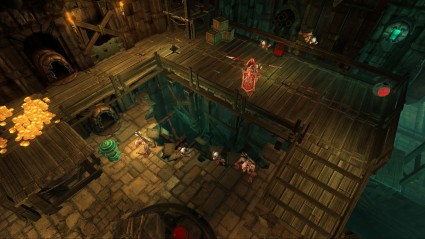 All about the swag...

It’s genuinely quite nice to not have a blaring soundtrack or over-the-top sound effects booming through the TV every five minutes for no apparent reason, and the fact that the sound is used so well increases the atmosphere in-game. In addition to this, the creatures will scream or growl as they attack, and squeal as you hit back. The voice-overs in the cut-scenes are pretty good, even if they don’t exactly blow you away.

Magical friendships
The entire campaign is playable with four player co-op, both locally and over Xbox live (limited to fifteen minutes until you purchase at least one class), and is a thoroughly enjoyable experience. Over Live you can select from a friends only, private or quick match, with the latter allowing you to select the type of people you would prefer to be matched with. This is split into three categories: Role Play, Hack ‘n’ Slash or Completionist. This is obviously designed to prevent you being stuck in a game with someone who steams off ahead, while you try and search all the nooks and crannies for hidden areas, or vice versa.

It’s a good idea, but so far I have not found it to make too much of a difference to the people I’m actually matched with. Naturally, that could be down to what label people are selecting in the menu, or the number of people online being fairly small, but it is a bit of shame.

The main reason for this is that if a couple of your teammates run ahead, you will drop off the back of the screen and then spawn into the middle of the play area. This can lead to a bit of confusion, especially if they continue to push on, as you’ll find yourself repeatedly dropping off the screen, re-appearing in the middle (where you take a couple of hits) and then dropping off the screen again. At one point this actually ended up with me having to restart my game, as first one, then a second, and then the third character got re-spawned behind a closed door that had locked after we had passed the checkpoint.

Obviously with friends or in organised sessions this is not an issue, and it is here where the real fun is had. It’s clear that Crimson Alliance is designed for a group of friends to get together and enjoy the experience, and the game doesn’t fail here, especially when you get a good balance of characters. This allows you to explore all of the levels to their full and strategically take on the enemies. In addition, only one person needs to collect the gold scattered around the level and it is distributed to all, meaning there is no frantic rush to beat your mate to the prize.

Unfortunately, the frame rate issues of the single player mode are enhanced slightly with the online connection. There are numerous occasions, even when there is relatively little going on, that you will find the characters stuttering around the screen for a minute or two before it settles back down again. As with the single player it is by no means a game-breaker, but it does have to go into the negative column.

Red or black?
Played alone, Crimson Alliance is a fairly decent game that gives you the option of how much you want to play, and charges you accordingly. It looks good, sounds nice, and despite one or two minor glitches, plays well. However, to get the most from the game you need to play it with friends, and here it becomes a really enjoyable, easy-to-play mix of scrolling beat-em-up and old-fashioned RPG.

It is not a hugely difficult or overly long game, but neither does it leave you feeling short-changed on content. Furthermore, Crimson Alliance is by no means perfect, but the minor glitches and issues don’t hamper your game or cause you any real frustration.

As such, it is a game that’s impossible to dislike, but one that doesn’t allow you to truly love it either, leaving only one possible outcome.