Despite a solid heritage on the PlayStation, the Driver franchise left a lot to be desired during the last console generation (particularly Driv3r, abysmal in both name and design). Like a disgraced uncle who got a little worse for wear at the last family reunion, flashing his nieces and vomiting over the vol-au-vents, it has been too embarrassed to show much of its sheepish face for a few years now.

In a last bid attempt to revive the series, Ubisoft have released Driver: San Francisco on this generation of consoles for the first time. Does the ol’ gal have some life left in it yet, or is it barely worth its weight in scrap?

You drive me crazy…

San Francisco continues where its predecessors left off, with Detective John Tanner having landed his nemesis Jericho behind bars. You’re forgiven for not remembering characters and storylines from over half a decade ago (I certainly couldn’t, probably the result of painful repressed memories of Driv3r); this is an entirely fresh start… and what a start it is.

A jailbreak soon leaves Tanner at the mercy of a cat-and-mouse chase with Jericho, and a particularly nasty crash results. Hospitalised and comatose, Tanner subconsciously constructs a dream world pieced together from his memories of San Francisco, and information blurted out by the news channel broadcast from his bedside television. This dream world (reality as far as Tanner is concerned) lets him gain an overview of the entire city and ‘shift’ into the bodies of civilian drivers at will.

The balance of plot is a little too heavy on the side of dramatic irony (we can understand what’s going on, but the protagonist can’t), with too much predictability for the audience. It’s also, as I’m sure you have already grasped, completely bonkers.

One saving grace is the handy ‘Previously on Driver: San Francisco’ re-cap that plays every time you boot up the game to keep you up to speed with recent events. More crucially, however, the ridiculous premise of the shift mechanic facilitates one of the most compelling gameplay innovations in driving games that I’ve ever seen. 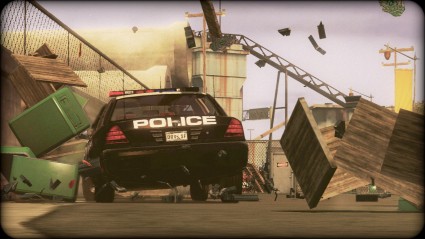 CARnage. Eh? See what I did?

Shift happens
Driver: San Francisco provides a viable solution for so many common bugbears of open-world driving titles. Fed up with spending several minutes at a time driving to each and every mission start? Shift there in seconds. Does said mission involve playing catch-up with and taking down a perp, normally a frustrating case of inching slowly closer? Shift into a car directly behind. Better yet, shift into oncoming traffic ahead and swerve to cause a head-on collision.

The shift ability opens up a world of possibilities, as well as allowing margin for player error; when you wreck/spin-out your current ride, feel free to grab another. It helps to keep the fast pace flowing, and does away with many of the dull and irritating elements that are unavoidable in so many other games. The only concerning part is Tanner’s willingness to place the lives of innocents on the line in the pursuit of justice, in what he believes to be a real world. As he maniacally asserts: ‘Every citizen is just a vigilante waiting to happen…’

At least pedestrians are spared, with their incredible ability to dodge any cars headed their way; there’s no roadkill in this game. This pacifistic approach means that you can speed down sidewalks at blistering speed without having to worry about dirtying your conscience (not to mention your front bumper).

Avoiding the road is often a good option, because the driving in San Francisco can be hectic to say the least. Gone are any previous mediocre experiments at on-foot gameplay; you’re limited to remaining in vehicles, and the game is better for it. Vehicle mechanics are, on the whole, extremely satisfying. The intense speeds that Tanner can reach with his paranormal boost ability whilst weaving through traffic, as well as the championing of takedowns, add more than a touch of Burnout to proceedings. 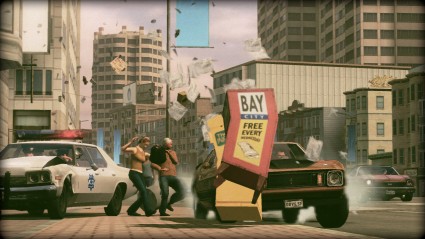 An abundance of ramps and ramp-like objects invite you to take to the air, and cars just love to drift when hurtled round corners. In fact, the driftability (new phrase coined; you heard it here first folks) of some cars is seriously over the top and difficult to control. There appears to be two extremes in direction: straight forward or sideways, with little in between. On the other hand, at least every stunt performed earns you ‘Willpower Points’, which can be spent on the game’s many unlockables.

There’s an impressive roster of licensed cars to collect, which are made available for purchase by buying garages around the city. You can also upgrade the size and refill speed of your boost bar, amongst other improvements. Performing stunts is a good way to earn some pocket-money, but to really afford these tempting goodies you’ll need to delve into the huge array of side missions dotted around the city.

These include a plethora of street races, daredevil stunt challenges, criminal takedowns, time trials and more besides. The sheer number of these activities is utterly daunting; you’ll never manage to complete them all. In fact, it’s unlikely you’ll want to. Sadly, many of the challenges feel second-rate to the main missions and can wear thin after a while.

They’re fun in small doses, however, and nicely pad out the story missions; most of which are excellent. As well as helping two misguided Japanese teenagers through their descent into the underground street racing world, and performing crazy stunts for a TV film crew to document, you’ll be possessing lowlifes and scumbags to get leads on Jericho’s whereabouts.

There’s no doubt that Driver: San Francisco is a mostly thrilling and sizeable ride from start to finish, but it does suffer from a few design flaws. Shift is a fantastic addition and truly makes the game what it is, but you could say that it’s actually too good. For instance, many races can be won without any actual racing involved. Instead you can propel enough civilians into the way of your hapless foes, through shift, to literally destroy the opposition. Freedom of choice or bad design? You decide.

So that one’s open to interpretation, but the broken game elements don’t end there. Opponent A.I. is guilty of varying degrees of ‘rubber-banding’; competitors will be artificially sped up when you’re in front, and slow down to let you catch up when you’re lagging behind.

This is particularly exploitable in one of the final missions. An otherwise challenging ‘chase’ sequence, where cars hurtle towards you as you try to pursue Jericho, is made laughably easy by tootling along at your leisure, forcing Jericho to do the same. The enemy cars even stop coming when you do so. Last but not least, some stunt challenges can be won by simply doing doughnuts (360˚ spins) on the spot. Mmmm… defects… 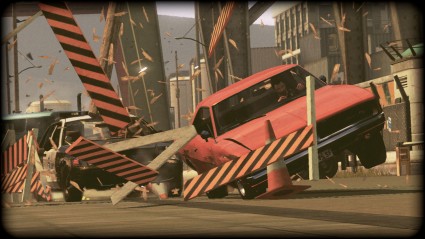 Nice car mate!
The city of San Francisco is brimming with life on both the roads and the sidewalks, perfectly capturing the hustle and bustle of the real-world location. More thought into criminal character models may have been prudent, however; the number of OAP street-racers and terrorists is alarming… perhaps pensions don’t exist in Tanner’s dream world?

Cars are beautifully modelled, but the scenery is unfortunately a bit grey and bland overall; whether that’s a reflection on modern urbanisation or a result of performance and time constraints is up to you. The frame rate is consistently high at least, which is laudable for a game of this nature. Most impressive of all are the CGI cut-scenes, which look fantastic; it’s just a shame that the real-time graphics aren’t as good. Oh well, maybe next console generation, eh?

If you’re go-ing… to San Fran-cis-cooo…
Despite its modern setting, Driver:San Francisco has a definite ’70s Starsky and Hutch vibe, and this is complemented perfectly by the game’s excellent and extensive licensed soundtrack. Soul and funk are blended with hip-hop and electronica; it’s an eclectic mix and one that I was largely unfamiliar with, but it all works surprisingly well together.

Added into the audio melting pot is a broad range of character dialogue. The game throws you into a lot of funny scenarios, like driving a man bitten by a deadly tarantula to a hospital, whilst he hysterically rants about squirrels and bright colours in his deluded and feverish state. Shifting into the bodies of civilians gives you an insight into their lives through conversation; there’s a lot of play on typical human behaviour and racial stereotypes (e.g. an Indian talking about tikka masala and a Japanese man discussing crazy game shows).

It’s all very tongue-in-cheek and sometimes in questionable taste. That said, although it’s hardly an example of script-writing genius or exemplary voice acting, it’s entertaining nonetheless. 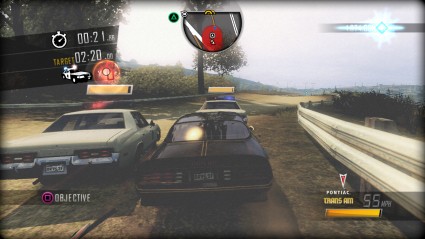 Tanner has an unearthly boost in his stable...

Liability in numbers
It’s heartening to see a game where large amounts of effort have been poured into both the single-player and multiplayer components. Driver:San Francisco can hold its head high in this regard. First of all you’re entered into a free-roaming hub of the city, which alone could provide great opportunities for having a laugh with mates. From here, though, you can pick from a variety of modes, many of which have sub-modes; in total there are 19 game types for you to have a stab at.

Ubisoft Reflections have provided us with some real crackers. As well as several racing modes, there’s Takedown, a cops-and-robbers challenge where players take turns as a criminal pitted against everyone else on the server; Tag, the opposite of the real-world equivalent in which being ‘it’ scores you points; and Trailblazer, a fight to lurk in the slipstream of an A.I. controlled car. The inventiveness and breadth of what’s on offer here is commendable.

An XP-oriented progression system ensures that you’ll be hooked on attaining levels and unlocks, and there’s even the rare luxury of a split-screen mode. Even if the multiplayer doesn’t become an everyday staple of your gaming diet, it’s undoubtedly something that you’ll regularly dip into now and again for some time.

Drive-thru or drive by?
Driver: San Francisco has absolutely redeemed the series after its previous failings, delivering far above and beyond my expectations. It’s easy to overlook the few broken elements, and the fact that occasionally the content can err on the side of quantity over quality. Shift is a brilliant innovation that shines throughout and helps to create one of the most varied games that I’ve ever played in the genre.

In fact, it’s arguably one of the most genuinely entertaining arcade driving games that we’ve seen in years. Truly a Crazy Taxi for the new generation.