One thing I can say for sure; in no other game on consoles I have been able to actually feel (and see)  the balance of my car as I do in Gran Turismo 5, and that’s no small feat or marginal detail. It improves the driving experience by an amount that can’t really be quantified. Gran Turismo 5 is the first of the series to include both visual and mechanical damage, but, unlike the rest of the physics engine, this part is a bit hit and miss. Mechanical damage is (for now) limited only to practice, the arcade mode and online gameplay. While on one hand the lack of mechanical damage in A-spec is perplexing, I have to say that, where present, damage is really well done, especially wheel damage, that will make the car wobble very visibly and realistically, unlike what happens in most console simulators.

Visual damage is equally hit and miss, but for different reasons; most console simulators nowadays go a little overboard in damage, with even light bumps with minimal relative velocity resulting in wrecks similar to hurling the car against a wall at 150 mph, widespread (mostly pre-calculated) deformation and the loss of every single speck of paint on the body. While this is a nice sight after a big crash, it tends to be annoying after the aforementioned light bumps.

Gran Turismo 5 goes overboard in the opposite direction. While light damage looks really realistic, with great looking real-time panel deformation and breaking, going as far as simulating different damage to different materials (carbon fiber, for instance, breaks and deforms in a different way than metal in the game), damage always seems lighter than it should be, and it’s really hard to get a car to look really wrecked. There’s also no glass damage, which reinforces the impression that the visual damage is definitely too light. While damage can be considered a rather secondary aspect of the simulation, it’s doubtless that it’s an aspect in which Polyphony will have to improve considerably in the future.

An awesome feature of the physics engine included in the game is definitely the inclusion of different weather conditions. Rain in GT5 isn’t only a rather impressive visual effect, but it affects driving and handling in a radical way, depending on how much water accumulated on the track. Driving in the rain in Gran Turismo 5 is a challenge, and a very, very fun one. It forces the player to stay on his toes for the full duration of a race, nurturing every bit of grip carefully, as even the slightest error can result in a disastrous spin against the guard-rail. Hurling down the Nurburgring in the rain with a decently powered car in GT5 is definitely one of the most adrenaline-pumping experiences I ever had in my gaming career. 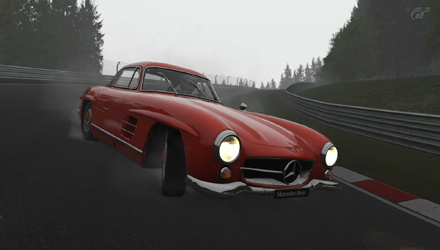 The combination between Nurburgring and rain will keep you on your toes, and it's a lot of mad fun

The level of the AI is one of the elements of Gran Turismo 5 that received the most harsh criticism online. Some went as far in their criticism as to create evidently staged (and long since debunked) videos in which the AI was placed in tricky conditions in order to make it fail (possible in basically every game that involves artificial intelligence, for obvious reasons), and pass the impression that AI drivers in GT5 drive around predefined lines without detecting or avoiding obstacles on their way, player included. If you read other reviews of the game, you probably are familiar with this concept, because many media sources took those videos as granted without caring to check (and without playing the game nearly enough to notice that they were staged fakes) and reported their points as facts.

While the AI in Gran Turismo 5 is far from perfect, it’s also far from mindless. Cars will often follow different lines, and will detect obstacles on their course, finally, they will most definitely try to avoid them. Sometimes they’ll manage, sometimes they won’t, exactly like actual drivers. They will also make mistakes, proof that the AI has improved considerably from the previous chapters of the series. Exactly like your B-spec drivers, AI drivers in Gran Turismo 5 have a dynamic behavior during races. They will become more nervous when they are pressured or when they are in heavy traffic (making more mistakes) and will calm down when the road is clear. They will also lower and raise their pace dynamically depending on how the race is going, trying to drive faster (and taking more risks) if you’re leaving them behind, and relaxing a bit when they’re on top, with a good gap behind them.

This makes for actually challenging AI opponents (provided that your car doesn’t overpower them too much, of course), that are a refreshing change over many other racing games and the previous Gran Turismo ones. They do tend to be a little bump-happy sometimes, but considering that GT5 features more cars on track than most competitors (and consequentially, more traffic and more chances of collisions), I would say that the level of the AI isn’t bad, and definitely not nearly as bad as some describe.

Not quite photorealistic, but as near as it gets

Gran Turismo 5 definitely has great graphics, with some inconsistencies that stop it just a step short of photorealism. Cars are the most evident example in the divide between the aforementioned “premium” and “standard” cars. Premium cars are as real as they get, with a gazillion polygons, a level of detail that goes above and beyond what you can notice at first sight (even at second and third sight actually), textures that will make your jaw drop and interior design so similar to reality that sometimes gets even distracting.

They are most definitely the best and most realistic looking cars to ever appear, not only in a console game, but in any videogame, on any platform. Whether you’re bringing them for a spin around a track or in the photo mode, you will find yourself noticing little details that you probably didn’t notice even on their real counterparts. 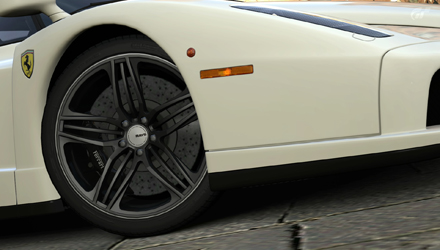 The small details will literally make you drool...

On the other hand, standard cars aren’t that dazzling. Most of them aren’t bad per-se (there are cases where the textures are decidedly bad, probably recycled from previous games in the series), but definitely don’t get even near to the level of detail featured by premium models. The fact that they even lack an interior view doesn’t help in appreciating them. That said, considering that their physics model is still top-notch, they’re still a nice have, and fun to drive, they just aren’t up to par with the premium models visually. Personally, it isn’t hard to see how much work has to go in each premium car, so I’m not surprised that Polyphony digital decided to go this route. If they decided to model all the cars to premium standard, GT5 would be released in 2015, on PS4.

Between having 800 standard models and 200 premium models with the level of detail that we see in GT5, and seeing 1000 models in the middle between the two, even with the level of visual fidelity shown by the best looking console competitor, I can easily say that I prefer the first option by far. The problem is decidedly mitigated by the fact that the visual difference becomes evident only when you look at most standard cars from very near. Too near to be a real issue during a race, or even during a replay.

Moving on to the environments, most tracks look extremely nice, even thanks to a slightly under-saturated color palette that gives them an aura of realism, as opposed to the excessively saturated palette used for most other racing games, and that tends to make them look relatively cartoonish. Even here, some areas are more polished than others, with some batches of spectators that are still 2D textures slapped on a flat polygon, and a lot of low-polycount trees. In the end, though, we have to remember that we are on a console, and compromises have to be reached in order to maintain a good frame-rate (that remains quite stable during gameplay, while not always 60 FPS, but still not featuring overly visible slowdowns) given the limited hardware resources. 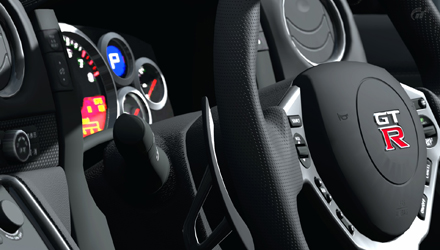 Interiors look as real as they get. You'll want to turn and push all those knobs and buttons.

What makes the game really shine is the lighting engine, that brings incredible-looking reflections, and makes everything look extremely realistic, almost reaching that much sought photorealism, and stopping just short of it due to the aforementioned inconsistencies. The full power of the lighting engine gets unleashed during night racing, where the game becomes legitimately breathtaking, and even more during transitions between day and night, treating us to some of the most beautiful sunrises and sunsets to ever grace a console game, enriched by some really fantastic artificial lighting from head/tail lights and lampposts/buildings. Unfortunately shadows aren’t as good as the lights, and while they have been improved and consistently blurred with the last patch in late December, they’re still quite pixellated, probably suffering from hardware limitations. Luckily it’s a rather difficult flaw to spot during racing, but another element that makes GT5 stop a bit short of looking like a movie.

Another element that finds no equal in other console simulators is the effects engine, with some of the best and most realistic smoke and dirt I ever seen in a videogame. Burning tires has never been so satisfying as the smoke that will raise from the asphalt can only be defined “impressive”. The same goes with the dirt raised from the occasional trip out of the track, topped by a variable amount of grass blades ripped from the ground and tires that actually get dirty. Even more impressive is the effect of the steam raised from the asphalt when it rains, that will correctly “mold” around the car and the rear bumper (instead of just passing through them as in the few other games that actually feature rain), creating an extremely scenic picture. Unfortunately there are some flaws here and there, like a visible aliasing effect where the car edges meets the particle effects, but still, the whole picture remains a sight to behold.