The date is November 24th 2004 (no, not right now, I’m doing a flashback; it’s a thing us writer types do). Sony are boasting a game that they feel will finally be their answer to the Halo series, which had been taking the console shooter plaudits since 2001. The game I’m talking about? Guerrilla Game’s Killzone, and boy was it hyped to high heaven back then. In terms of sci-fi, it seemed to be right up my street with a dark, brooding story and action that didn’t feel too far set in the future. After a brief flirt with the demo I was convinced enough of the game’s quality to pick it up on release.

What came next was crushing disappointment as the game was marred by awful visuals, invisible walls, wonky A.I. and glitches galore. When all was said and done it was simply a mediocre release and could hardly be featured alongside the premier titles over the PS2’s lavish history. With that in mind, it was no surprise that I was going to approach Killzone 2 with caution; no matter how awesome the trailers looked, no matter how much the hype was multiplied I wasn’t going to be sucked in this time. Unfortunately I probably should have allowed myself to be, because Guerrilla redoubled their efforts and produced a game that I would happily recommend to anyone.

Nazi’s… in spaaaaaace
For people that may have missed the first game (you are lucky! I don’t jest…), I’d better explain exactly who your enemy is. Namely, it is a humanoid race called the Helghan, the result of human evolution when faced with less habitable pastures than Earth. The Helghan have become a very militaristic people, with somewhat of an undeniable similarity to the Nazi’s, harbouring a deep loathing of the human race. So that’s who, but what about the when? With previous battles usually taking place on human colonies (the first game focused on Vekta ), the ‘Interplanetary Strategic Allliance’ decide on a risky measure; the ambitious scheme of taking the fight directly to the planet Helghan to secure Scolar Visari as a prisoner, which they hope will end the war.

The story is competent enough to tie all the major proceedings together so that the game flows pretty well. It’s hard to find fault as all the events are well presented, but for the most part you’ll find your typical space-marine affair. The story isn’t itself a massive weakness in the title by any stretch, and even asks questions about certain aspects of real war, but it’s something we’ve seen many times before and it’ll hardly have people talking at lengths about clever plot devices. You know what, though? This isn’t Half-Life 2, this isn’t about the story; it’s about putting you smack bang in the middle of a war, and in that regards it complements the rest of the game nicely.

Taking the fight to the Helghast
In pure gameplay terms, Killzone 2 does little to really revolutionise the first-person shooter genre, however what it does is excel at everything that is typically expected of it. At first I found the controls a tad heavy, but this was easily solved by tailoring the sensitivity until it suited my playing style. The combat itself reminded me heavily of F.E.A.R due to the overall intensity. This feeling of familiarity came about because, like the drones in F.E.A.R, the Helghast soldiers constantly press, keep you pinned down, and constantly attempt to flank and rush you out of cover.

Speaking of cover, a very basic cover system is implemented here. Pulling L2 will snap you to whatever cover you are next to, and then you can use the left analogue stick to lean out or stand up to fire back. At rare times this system was admittedly a little clunky, leaving me wandering out into the open without realising I wasn’t snapped to it completely, however for the most part it works perfectly fine. There were also moments where the A.I. let itself down a little, leaving me able to get behind enemies easily without them realising, concentrating on my NPC teammates even after I’d taken a few pot shots at them.

The much maligned Sixaxis sees mixed results in its usage by Guerrilla. The high point, and possibly the best use I’ve seen of Sony’s motion control in any game, is the requirement of a steady hand when using the sniper rifle. Subtle implementation like this adds to the experience and enhances the feeling of immersion; things like setting charges and turning valves do not. When setting a charge for example, you are required to hold L1 and R1 and physically turn the pad to the left, then to the right to arm it. When I’m sat enjoying the hell out of the game in a relaxed fashion, the last thing I want to do is have to waggle my arms around to be able to progress and moments like this really stick out like a sore thumb. 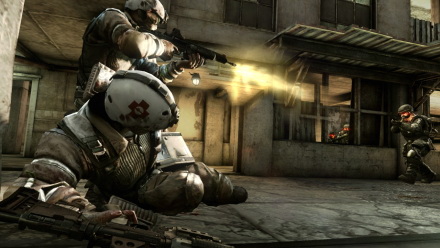 For the most part, Killzone 2 is a linear affair, but it never once feels like an issue thanks to the combat. A lot of the action takes place in confined and condensed arenas, however occasionally there are moments with wide open areas with several objectives that you can tackle in whatever order you like, however these are few and far between. Despite that, you never feel anything other than that of being in the middle of a war. One other thing I feel I need to mention is a slight lack of variety when it comes to the enemies; for the most part you are faced with your standard soldier types, although some more heavily armoured than others. This is alleviated a little by the one or two moments you could consider boss fights, but whether they are epic enough to be considered that is another matter entirely.

Very grey, but very beautiful
Put simply, Killzone 2 is just a gorgeous game in spite of a very grim colour palette. It’s quite possibly one of the best looking shooters I’ve seen on any format. However, as I mentioned before, the game is very linear and this helps any development team worth their salt to put a greater emphasis on visual appeal. The terrain looks suitably war-torn, with crumbling and decimated buildings offsetting a bleak Helghan planetary atmosphere. There are some very minor issues, such as poor lip-synching, and counter to what other reviews might have claimed there is a considerable difference between cut-scene and gameplay. But even with that said, you really can’t deny that Guerrilla have pulled out all the stops to make sure that their title stands out more than most shooters on the market around today.

We love Cox!
Killzone 2’s soundtrack is a total attack on the senses. The rising backing track never fails to get you in the mood for entering a warzone, and in the midst of combat, gunshots and explosions exhilarate suitably, especially when experienced in surround sound. What deserves special mention is the voice acting, which is incredibly polished. While the screams and noises of war around you feature the typical sweary shouts of combat weary soldiers you’ve heard in many other games, the main cast really excels.

No more so is this the case than the work of the legendary Brian Cox, who steals the show completely as Scolar Visari. As soon as his stirring voice kicks in over the opening sequence it has you instantly sucked in. Alongside Brian Cox and also returning from the original game (although voicing a different character) is son of Worzel Gummidge, Sean Pertwee voicing the vicious Colonel Radec. 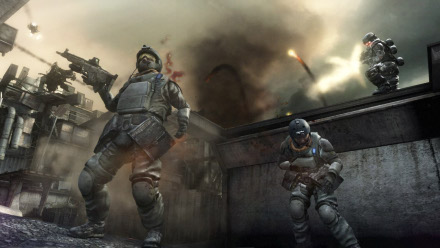 Body count
If you were to ask me to describe Killzone 2’s multiplayer component in just one word, that single word would undoubtedly be ‘epic’. The best mode you’ll find is the 32 player ‘Warzone’. This isn’t just one game mode, it’s five. Giving a real point to the killing, over the course of a round of Warzone you’ll be given five different objectives, win the majority of these and you win the game. The missions include game types such as team deathmatch (known as body count), search & destroy, assassination, capture & hold, and search & retrieve. These missions can come in any order and it adds a lot of variety to the online component, and is something I’d like to see in other games. Aside from that you can create your own matches based around as many or little of those missions as you’d like, along with a few other game types, such as mini-frag and one-on-one.

The levelling system is a lot of fun. Similar to the likes of Call of Duty, you earn points for each kill and attempt to complete objectives, and these go towards your level post-match. All players start out with standard assault rifles and then unlock weapons and abilities as they level up. The abilities add a lot of depth and strategy as you can earn the power to drop auto-turrets, create weapons caches, be a spy, heal people or even lay down spawn points.

Also unlocked early on are the squad features, which mean you can work in teams within the game (you’ll have seen this system in the likes of Battlefield), allowing you to spawn directly near your team-leader. Lastly unlocked by levelling up are the clan features which, although expected of most big online shooters these days, are a welcome addition nonetheless. It’s a very smooth experience that is easy to get into and rewards consistent play; how much you get out of it is pretty much directly linked to how much you put into it.

In the course of my time with the online component I didn’t once see one iota of lag or any other technical glitches, although there was one minor issue when playing as the Helghast. You see most of Killzone 2’s environments are bleak, and the Helghast helmets sport very awesome-looking, but also very visible red eyes, which makes spotting them an easier task than spotting the ISA forces. It’s a very small fault in what is otherwise a brilliant example of how online shooters should be approached.

Help! I’m running out of superlatives!
With the second bite of the Killzone cherry, Guerrilla Games have finally done their original vision justice. Not only have they made a thoroughly enjoyable shooter, but it’s probably the most polished exclusive shooter that the PS3 will see for quite some time. Questions over whether the experience is equal or better to that of Halo will continue to rage on with the fanboys, but honestly, who cares? To constantly make that comparison does a great disservice to both developers; Killzone now deserves to be mentioned in its own right. Any PS3 owner looking for the total package of a solid single player campaign and deep multiplayer should definitely have this in their collection. A must buy if ever I’ve had to recommend one.