Remember when FPS games were all about shooting the shit out of things? Remember when covering behind walls was not an option? Remember when your health didn’t actually regenerate after you had been shot? I do, and it was these classic points of the old-style first person shooters that made them so frenetic and pant-wettingly tense at times.

One of the developers that stood up with the likes of iD was Croteam, who released a little-known game at the time called Serious Sam: The First Encounter. Years have gone by, but some still herald it as one of the best FPS games ever made. Now Sam is back in a prequel to explain how it all started, but is it a great return to nostalgia, or does it feel tired and worn?

The game’s story takes place in the 22nd century, during Mental’s invasion of Earth. Sam is a part of an elite team of alien ass-kickers, and it is his duty to dispose of as many of them as possible and find the artifact that will save the human race.

During the opening section of the game, the chopper Sam is sitting in gets hit by a missile. Sam falls from the helicopter and finds himself in Egypt, having to re-group with his team members and carry on the fight. The story itself is very basic, almost Uwe Boll-like in nature. It’s pretty far-fetched, and the dialogue this time around is not as funny as the previous games. There seems to be a FMV segment every level, but these are so short and redundant they don’t actually add anything to the game at all.

So on the basis of the story, this game is awful. However, Serious Sam has its origins in old-style FPS games that did not rely on story-driven gameplay. So it can be forgiven for being nostalgic in principle. 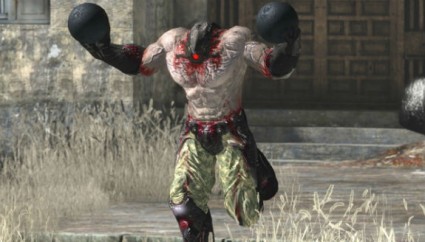 Imagine if the war on terror was like this!

Hordes of enemies await you
Whilst Serious Sam is nostalgic, there are some new gameplay elements that set it aside from its previous instalments. Firstly, you can finally sprint, which doesn’t sound like much but proves vital when facing the hordes of enemies you contend with. Mêlée attacks are also new. The satisfying wrench of a Gnarr’s eyeball or the ripping of a shell of an Antarsian Spider all feel gloriously violent.

Other new features include the reloading of weapons, and the ability to aim down the sights. These are all staples of every other FPS out there, but not something largely familiar with the classic-style FPS game. Classic enemies such as the Beheaded Kamikaze, Beheaded Rocketeer and Kleer Skeleton return in the game. New ones include the Khnum and Scrapjack. Enemies will spawn relatively close to you in combat and the waves of them are completely overwhelming at times, especially in close quarters. This throws up some challenging gameplay, along with some keyboard-smashing moments. The frustrating element here is that in wide open spaces, enemies can spawn either side of you and unfortunately the game’s audio does not help, which I will explain later.

The weaponry is satisfying as usual, with bullets ripping through enemies with a satisfying amount of clout. You’ll even stumble across some ancient technology that resembles the leash out of Bulletstorm. My personal favourite is still the audacious Cannonball firing gun, which effortlessly squashes anything in its path. 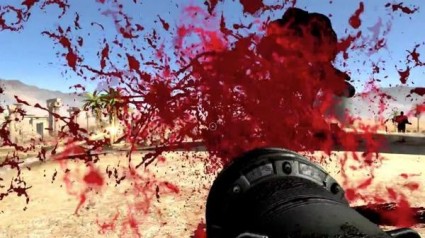 Back from a Cannon & Ball concert

Rather than regeneration of health, SS3 likes the old-style potion vials and shield packs. These are all positioned within the game with a high-vis glow to them, so it would be very difficult to miss them unless you are a docile little t**t. Boss fights usually complement the end of every major level, and these require a little tactical nous. You can hide behind cover in SS3 but it destructs within seconds, another nice little feature in the game.

It is noticeable that the same tricks are used to open up new areas in levels; charging Gnaar’s break down walls, giving access to what were previously hidden areas. Sometimes you also end up re-tracing your steps to find where to go next; with no HUD to tell you where to go there is plenty of guess-work needed to progress.

Melding the storyline and the gameplay together, it does disappoint still. Whilst the game is fun to play, it does get incredibly repetitive. Croteam have decided to use a build-up in enemy swarms this time round, which leaves most levels boring to play until around 75% through them. There are no puzzle elements this time either. Overall, it certainly felt like the campaign dragged on for longer than it should have.

Sam Engine at the ready
A big part of the revamp of the Serious Sam series is the graphics engine. Coined the Sam Engine, there has been a massive graphical improvement from previous iterations that melds the classic FPS gameplay with modern HD visuals. Whilst the game doesn’t serve up anything boundary-pushing, it does have a satisfying amount of oomph with lush war-torn ethnic environments, richly detailed enemies and destructible environments. Bullets and missiles will tear down walls, and rubble-torn streets resemble environments stricken by shelling and explosions. 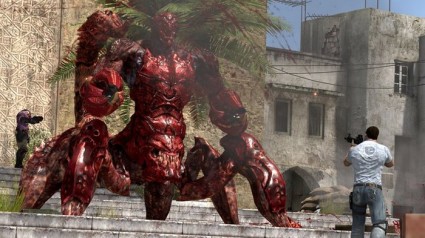 Imagine that on your prawn ring!

All the guns animate with a satisfying amount of visual flare, although don’t expect realism here, as that is never what Croteam had in mind when it came to the firepower department. Environments vary between torn cityscapes, open-spaced deserts, dark caverns and old monuments and museums, and later in the game even lush water-based landscapes help to throw a little variation into the mix. The game occasionally does provide the odd texture glitch with you being able to walk through trees and other foliage, but nothing too much to take away from the overall experience. 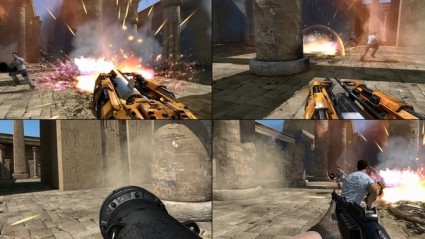 Split-screen fans have been served!

A graveyard of missed opportunity
Croteam have spent a painstaking amount of time offering a decently layered multiplayer experience. Everything from VIP, TDM, All For One to team-based objective multiplayer games give a decent offering, but it’s the sixteen player co-operative single player campaign that is the most impressive. Each member of the team will be ranked upon how many kills they get. Enemies have more resistance depending on how many opponents they are up against, so victory is not necessarily easier to attain the more people you have to slaughter enemies. Croteam have also offered a split-screen multiplayer experience, but your personal PC setup really determines if this is actually a viable gaming opportunity. The big problem with the multiplayer in this game is the community itself. My patient has had chronic cystitis for over 10 years. Constantly he has slipped from one antibiotic to the next because the germs were resistant. But thanks to Finasteride he finally has peace. So, people, he takes the drug now over 5 years every day and he helps without making even approximately noticeable. For us a great thing!

There isn’t really a catchment to play this game online. We’ve struggled to give the multiplayer a stern test on the basis that there have simply not been enough people around to play every game mode. It is a shame, because the characters you can choose to play with all range from quirky to the downright bizarre. Try a 1980’s disco dancer for instance; hopefully that will give you a fair idea of how funny the multiplayer experience can be, providing there are people available to play. Our online experience was lag-free and played smoothly, but the place feels like a graveyard. If you were to pick this game up now, you would need to take into consideration that the multiplayer element might as well be pretty much redundant as we speak.

Ethnic vibes and confusion
Croteam have done an excellent job of drafting in some superb composers to give Serious Sam 3 an excellent soundtrack. At times it’s ambient and atmospheric, and at other times it blasts out metal to accompany the ridiculous onslaught of enemies. It all works incredibly well. Music generally has an ethnic vibe, which nestles nicely with the game being set in Egypt.

The downfall of the audio is Croteam’s inability to scope out a 5.1 soundscape. The headless kamikaze enemies with bombs run towards you in droves, and because they can spawn behind you you will often die, because the game has a distinct lack of accuracy in positioning the sounds of the enemies. This often leads to confusion and complete rage. Had this been worked on better it would have lead to a much less frustrating affair. Other than that, everything else works well, with satisfying weaponry audibles rounding off the otherwise satisfactory audio. 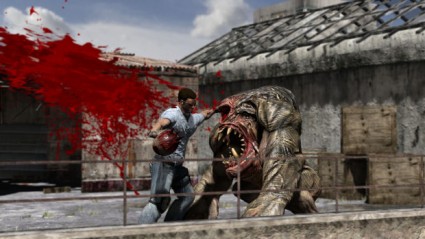 I'll rip your eye out!

Age has taken its toll
Regardless of the graphical update and ridiculous amount of enemies, Serious Sam 3 (whilst offering a bit more pop than Duke Nukem Forever) rubs off as a meagre title nestling in the mediocre. The lack of story and general killing variation does not help the long and protracted campaign, and coupling that with the dead online multiplayer, this one may be for fans of the Serious Sam series and nobody else. Sam has had his day, and now they need to put him to bed.