It’s sometimes easy to forget during the launch window of a new console generation that there are other platforms out there. Yet in spite of that, the chances are that the best games to come out this Christmas will be on these established platforms, not on your shiny new PS4 or Xbox One. This is a fact looking increasingly likely as we’re once again faced with some rushed launch games that haven’t fully lived up to the hype.

Of course, given that this is a review of Tearaway for the PS Vita, I’m here to tell you why one of the best games you can get this Christmas season is on the PlayStation you perhaps weren’t expecting.

After playing both LittleBigPlanet games it was fairly clear to me that Media Molecule has enough creative talent to build a washing machine simulator out of Tic Tacs and make it brilliant. Tearaway is a fantastic showcase of both this incredible ability they possess as a team, but also perhaps more importantly; a fine example of what the PS Vita can do when put in the hands of such a developer.

Taken at its most basic level, Tearaway is a 3D platform adventure game where it’s necessary to figure out a way through each level, and defeat enemies along the way in locked down arenas before progressing. Yet to call Tearaway a simple platformer would be a little like describing the Mona Lisa as just a painting.

For starters, the world is made of paper, every last element of it, to the point that you could re-create it in real life if you so wished. While this may not sound like a great basis for a game, it allows for a wonderfully vibrant world, stylised so that everything from the sun to rolling waves are made out of moving paper. It looks incredible and unlike anything you’ve seen outside an origami class. 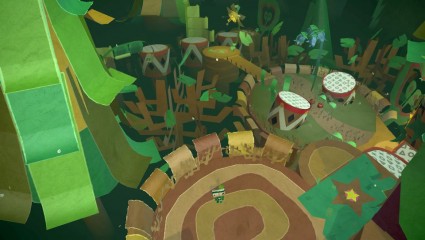 The pads with PS button icons on them can be used to fire Iota into the air by using the back touchpad.

In fact, one element allows you to photograph certain things and will give you access to download a real plan for it, so you can physically make that item. This is a great touch, especially if you are playing through Tearaway with children (which I would wholeheartedly encourage; this is very much a family game) as it gives them a genuinely tangible reward for playing. For me playing as an adult though, it brought about a real childhood nostalgia moment in the best way, as I remembered making things (usually quite badly in my case) with paper.

In this paper world, one of the protagonists is an envelope named Iota or Atoi, depending on whether you choose male or female. Yet in a move I cannot think of having been done before, there’s a second protagonist in this game, and that’s you. Tearaway makes ingenious use of the front and back cameras on the Vita to put you in the game at every opportunity, with the characters often directly referencing you.

You are the face in the sun that shines down on the world, but there are also moments where your world breaks into the paper one. Sometimes this is incidental, but at other times this allows you to directly affect what’s happening, by using the front or rear touchpads to solve puzzles, or defeat Scraps, the one-eyed newspaper-covered enemies. This is always done in a manner that makes it clear you should interact in this way. In fact, the whole basis for the existence of Iota/Atoi is to deliver a message to you.

Beyond this, you also use your voice and actually take photos of yourself to influence proceedings. It’s all done with so much charm and character I found myself doing things I would normally find absolutely ridiculous, and better still, I did them all with a huge grin on my face. So many times throughout I found myself chuckling away at what was happening, partly in disbelief at something so different, and partly with genuine humour.

Media Molecule has managed to make use of every single interaction method on the Vita, and each one of these interactions makes sense, and works well. There are no shoe-horned log balancing moments here, or horrendous letter-opening and holding up the Vita to a bright light nonsense. Every input makes sense, and just works.

That said, some later sections get a little tricky as you have to jump across a series of platforms that are being attacked, while swiping the front touch screen to reveal jump pads, or use the gyroscope while crossing platforms, all of which, in my case, seemed to involve minor contortion. Thankfully, this was all forgiving enough to be manageable without too much difficulty. 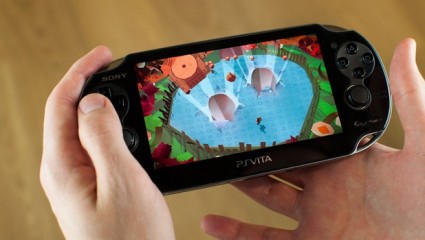 The magic of actually using “your” fingers to get the bad guys.

Weaving the game together is a soundtrack as evocative and whimsical as Tearaway’s artwork. It finds its roots in folk music and runs the range from jaunty sea shanties, through to an incredible section where you’re assisting with a drum ceremony, taking in some very catchy numbers along the way. It even had the odd melancholy piece. All of these tunes fit the game perfectly and really added to my attachment to the world. It didn’t hurt that I found myself whistling a couple of the songs afterwards either; it’s a good enough soundtrack that I would happily just listen to it.

Then, perhaps too soon, it’s over. Though not before Iota or Atoi deliver their message to you. I won’t spoil it here but the message is unique to each person, fits the game perfectly, and gave me pause to smile and reflect on what had happened.

I may have made this sound like the second coming of gaming, but Tearaway isn’t all perfect. The fighting sections could be better; I love the designs of the different Scraps, but aside from the moments where you can directly affect any fight, there’s nothing in the combat I haven’t seen before. It’s in no way broken, but this stands out a little in a game that’s so inspired everywhere else.

It’s also fairly short; I managed to get the platinum trophy in around 8-10 hours at most. That does bring in another issue though. There do seem to be a few glitches, in particular with one level where I struggled to get 100% because it told me I’d missed killing an enemy. I had to replay that level a few times before the final trophy pinged for no obvious reason. I also had a moment where a companion got stuck in some scenery, which forced me to restart. These are small quibbles, though, in what is a wonderful game, and in truth, my main gripe with the length of Tearaway was just that I wanted to play more of it.

Re-Vita-lised
The only sad thing here is that as of now, there still aren’t a huge number of Vita owners to play it. With the recent price drop and the advent of the PS4 hopefully this will soon change, but suffice to say that if you own a Vita, I would wholeheartedly recommend that you buy and play this game. On the other hand, if you’ve been sitting on the fence as to whether you should buy a Vita, perhaps this is the game to finally push you over. I loved every moment of playing Tearaway, a game that finally makes every element of the PS Vita shine.