As a fiction writer and a gamer, I find myself standing on a strange line. Fellow writers find it hard to believe I play games because I enjoy the stories, whereas the gaming community tends to dismiss, if not ignore, storytelling completely. While we’ve certainly come a long way from “your princess is in another castle”, it’s still very common to see gamers, and the general public, dismiss games as a storytelling medium.

Yet games can, and often do, have all the storytelling elements of books. These literary devices may look and act differently in an interactive medium, but they are still an invaluable part of the gaming experience. Even if many writers – and gamers – don’t realise it.

There are plenty of devices to talk about, too many to give justice to in one article. So for now, let’s take a look at one of the most interesting and complex aspects of storytelling: symbolism.

At the end of Metal Gear Solid 3, the protagonist Naked Snake is forced to kill his mentor The Boss. Their final fight is in a circular field, and when The Boss finally falls to the ground, she is surrounded by these tall white flowers. After a devastating final conversation, Snake kills The Boss, and all the white flowers are hit by a gust of wind which turns them crimson red.

Obviously, flowers don’t actually behave that way, but that wasn’t the point. Those flowers related to the larger story: the destruction of something that was once pure and wonderful. In other words, that scene was symbolic of what was happening in the plot. 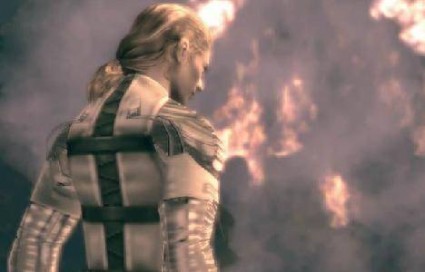 The white flowers turned red represent the Boss’s sacrifice, of both her life and her reputation.

A symbol doesn’t have to be an event. Objects, locations, settings, characters; all of these and more can work as this type of device. A symbol is simply one concept or idea that is used to relate to or represent another. They are often used to reinforce characterisation and plot, adding additional meaning to what’s happening in the story.

Video-games have a unique relationship with symbols. In a way, every game is full of them, because games are designed to use one concept to represent another. The health bar on your screen doesn’t actually function as your character’s well-being, but it represents their health. There are also narrative symbols, like the helmet lying abandoned on the ground in Halo: Reach, which symbolises the devastating losses and deaths which occur in the game.

Where symbols really come into play is the discussion of larger ideas and themes. A symbol will often relate to the central conflict in the story, or to a character’s role in said story. A character can even be a symbol themselves, especially if they are an archetype that represents a certain “type” of person. Kyrie from Devil May Cry 4 was a symbol of innocence and goodness, and the chance of redemption for the protagonist Nero. In saving her, Nero discovers his own capability to be good and heroic. Of course, using people as symbols can invite all sorts of trouble, but that’s a discussion for another day.

Possibly the best example of the use of symbolism in video games is the Silent Hill series. Each title is chock full of symbols, with everything from the monsters to the memos to the twisted “Otherworld” representing some aspect of the story. Angela Orosco’s knife in Silent Hill 2 is a symbol of her suffering; the monster Valtiel in 3 is symbolic of the fear of being stalked, specifically for a young teenager like Heather; and the character of Young Walter in 4 symbolizes Walter’s lost humanity and innocence.

Young Walter gives the player hope that his older counterpart can be redeemed – a hope that is eventually destroyed.

The problem with symbols is that once a symbol is used to relate to something, that association doesn’t go away. This can create confusion if the writers then change the symbol or try to use it to mean something else.

Take Mass Effect 3. In the beginning of the game, Shepard fails to save the life of a little boy. That boy becomes a symbol of loss, failure, and death for Shepard, and appears multiple times in dream sequences. Then, at the end of the game, the boy appears again as The Catalyst. Since he has always been a dream symbolic of Shepard’s worst fears, the association that is present in that scene is unreality, even though the scene is decidedly real. The use of the symbol in such a contradictory fashion weakened the narrative at that point.

For the most part, symbolism in gaming works no differently than it does in other mediums. Yet, unlike books or movies, the ‘audience’ has a direct role in the story. That makes everything more immediate and personal, including the symbols. The infamous cake from Portal is a fabulous example of a symbol which had a powerful impact on players. The cake was, at first, a representation of success and future reward, which was later revealed to be a false promise. Then it became a symbol of GLaDOS’ betrayal. Though it wasn’t a far-removed fictional character being betrayed; it was you, the player, being promised cake and then denied.

Symbolism might be a complex issue, but as far as implementation goes, it’s easy to include in video-games, so long as you have a good team of writers on board. Not every literary device translates so easily, however. Next time, I’ll tackle a topic that’s a tad more difficult: the use of irony.