Our friends in America would like us to believe that Football is a game played almost entirely with the hands and where the biggest scoring play, a Touchdown, is achieved when the ball crosses the goal line in the air. Naturally us Europeans know different, and so to differentiate from what we know as football we simply say ‘American Football’ instead. However, this in itself is a bit of a disservice to a game that is growing as both a spectator and participation sport worldwide and which has also recently professed a desire to one day be part of the Olympics.

This increase in popularity is as much to do with the Madden franchise from EA Sports as it is the ever-increasing hype machine that is the NFL, its source material. This year’s game is out at the end of this month and I have been playing the recently released XBox 360 demo to see how it’s shaping up.

First things first, I am one of these people that doesn’t have a living room the size of a football pitch and as such have not invested in Microsoft’s Kinect peripheral. As a result, I have not tested the voice command function in this latest version, arguably the biggest single change from last year’s game. Instead I have spent my time pounding the turf. Secondly, I skipped last year’s offering entirely, so my own personal impressions come more as a view on this demo and where comparisons are made, they are to Madden 11.

The first thing you notice on launch is the customary EA Sports presentation polish is very much intact. This year’ s demo sees an introduction to some Windows/XBox style tiles on the home screen that allow you to quickly launch into a game, or have a look at some of the new features this year’s effort has to offer. Unfortunately these all take the form of a written outline rather than any game footage. Nonetheless, it is just about enough to whet the appetite for the improved Ultimate Team mode, and what is currently my most anticipated new game mode of any Madden title: Connected Careers.

This only leaves us the option to take to the field in one of two matchups; last year’s NFC Championship game between the New York Giants and the San Francisco 49ers (and a chance for some payback as a big 49ers fan), or the Seattle Seahawks up against the new-look Washington Redskins, complete with one of the coming season’s most exciting prospects, Robert Griffin III. 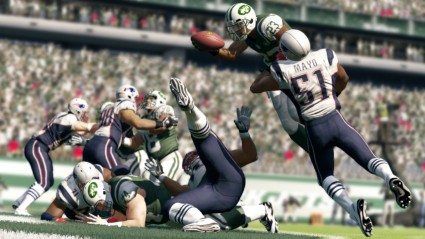 Having chosen your match and your side you are able to select any of the difficulty levels and go into a single, five-minute per quarter match. The only other pre-game option that is adjustable is the play call type. This year you can choose from the Conventional three box view that basically gives you Madden’s top three options from your playbook, or Gameflow which has the single preferred option selected. You can alter this selection by adjusting your tactic from Gameplan to either Aggressive or Conservative on Defence, and by choosing Pass or Run on Offence. In either mode you can easily access the full playbook if you’re not happy with the option given.

Graphically Madden looks more polished than ever before, with ever more detail in the player models and the now-typical EA Sports TV-style presentation that makes you feel like you’re watching one of the big games on the box. This presentation and style carries into the commentary with the new duo of Jim Nantz and Phil Simms.

On the pitch the immediate observation is the change in view for kick off. Instead of the regular behind-the-ball view that has been with the series since the early days, kick off now has you viewing the action side-on. This initially makes aiming the kick a little awkward until your brain registers that despite the view, pushing left will aim left, right will aim right and up and down will raise or lower the trajectory. It seems a little odd as this is the only time the view alters from the traditional behind-the-ball option. 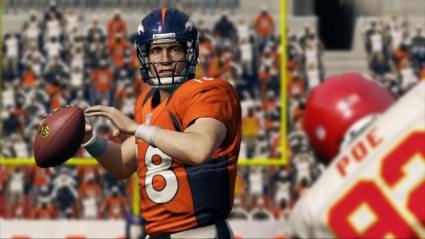 He'll never be as famous as Tebow

The action plays out much the same as previous versions, but as you’d expect from one of EA Sports big franchises there is a little more spit and polish to proceedings than in previous versions. Mechanically this takes the form of additional feel on passes, where the trajectory of the throw can be affected by the length the relevant button is pressed. For example, hold the X button down and your Quarterback will fire the pass low and hard to the receiver designated to the X button. This in itself is nothing new, but the fact that a quick tap will loft the ball up, and more importantly that there is now the ability to find various degrees in between, is new and does give the player more control on the passing side.

This control is added to further by the fact that the receiver’s designated button is faded prior to the moment they start to look for the ball, giving you a visual aid as to when is the ideal time to make the pass. Billed as a design to help match the modern Pass First NFL, it remains to be seen if this makes pass plays a little too easy to make online matches fun affairs.

The other big mechanical addition is the improved player impact engine that we have also seen and heard for this year’s FIFA. American football is more of a contact sport and this tests the impact engine far more than in FIFA, and generally it holds up well. There have been a few moments where the players seem to crumple a bit, but by and large the intense power and physicality of the sport is clear to see.

To close, Madden NFL 13 has the makings of a very good game that will certainly appease fans of the sports. We’ll have to wait and see how the new game modes play out, but if this demo is anything to go by, they should be a treat. I’ve got my copy on pre-order.