Surgeon Simulator 2013 is a darkly humorous over-the-top operation sim game where players become Nigel Burke, a would-be surgeon taking life into his own shaky hands, performing life-saving surgical manoeuvres on passive patients. The original prototype, developed in just 48 hours at the 2013 Global Game Jam in January, challenged players to complete a heart transplant. The problem was, they were armed only with an arsenal of clumsy and inappropriate tools and a hand that was diabolical to control, using a combination of keyboard and mouse actions.

The full Steam version comes with additional features, operations and environments. From carrying out terrifying transplants in-theatre, to surgical procedures in the back of an ambulance, Surgeon Simulator 2013 now takes operating to the next level.

The game is made by London-based Bossa Studios, led by a team of veterans from the worlds of gaming and entertainment. Bossa are the proud creators of BAFTA-winning Monstermind, and the BAFTA-nominated Merlin: The Game.

After chatting to the guys at the PC and indie gaming show Rezzed, they have very kindly offered our readers here at TIMJ a selection of prizes for our very own Surgeon Simulator 2013 competition.

‘What can I win?!’ I hear you scream. Well, we have a nice selection of the following:

What you need to do

Send us a picture of yourself as a doctor or surgeon at work. We leave it up to you how you work this out, but it could be a digitally altered image of yourself or you could use props and/or makeup. Go wild.

My son desperately wanted to enter this competition, and despite me telling him he is not allowed to enter, he still knocked up the photo below which is a good benchmark for the kind of thing we are looking for. 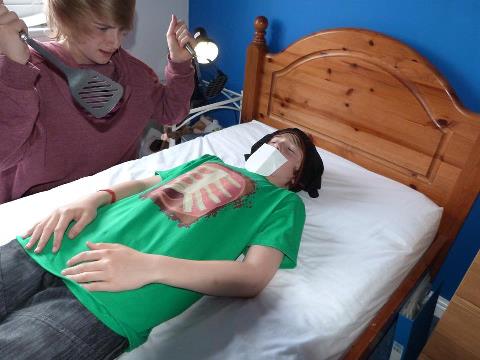 The best, as judged by us, will win a bunch of cool Surgeon Simulator 2013 goodies. While it will be a fair competition because the best photo will win, extra kudos will go to those that love to retweet or like our articles via Facebook.