You’d think that a license as iconic as Aliens would have resulted in some phenomenal games over the years, but really, what’s come since the 16 bit era has been nothing but a string of disappointments. Most recently, Rebellion made a decent fist of Aliens vs. Predator but fell short, providing an underwhelming game that only hinted at its true potential. Meanwhile, Obsidian’s hugely promising Aliens RPG was canned by SEGA in favour of putting all their Xenomorph eggs in Gearbox’s generally successful basket. To be fair, for a while there it was looking promising too…

With this review delayed, though, you’ll likely already know what happened. Alien: Colonial Marines bombed critically as co-developers Gearbox and Timegate attempted to shift the blame to each other, while SEGA still seem to stand oblivious as to what the hell went wrong.

If you’re looking at us for a review that deviates from the mainstream’s perception of the game, then you’re going to be disappointed: Aliens: Colonial Marines is undeniably scary, but for all the wrong reasons.

Pretending that Alien 3 never happened…
Set weeks after the events of the movie Aliens, Colonial Marines follows the soldiers of the USS Sephora as they investigate the disappearance of Hicks, Hudson, Vasquez and the rest of the previous team sent to find Xenomorphs on LV-426. Of course, after finding the team’s ship floating in orbit around the unstable planet, all they discover are the remnants of battles lost.

It quickly becomes clear that all hell has broken loose, and their predecessors have been all but wiped out by a deadly combo of razor-sharp claws, tails and acid blood… It’s going to get a lot worse, however. Both the Xenomorph infestation and the sinister Weyland-Yutani Corporation have other plans…

While this all seems like it should be a sound synopsis for an Aliens sequel, the result is much less interesting. The majority of the cast are bland and lifeless, and even the game’s poster boys, the playable Winters and his best buddy O’Neal, fail to highlight any real charisma outside of the game’s macho, military stereotypes. Characters returning from the movie are wasted, adding nothing noteworthy; their presence is more for awkward, poorly implemented fan-service rather than a genuine attempt to enhance the story. What hurts more is that their inclusion ends up shitting all over the license that Gearbox professed to love on more than one occasion. 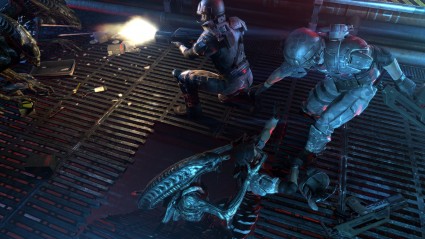 This never happens in the game…

Just another bug hunt, and I’m not talking about the Xenomorphs
If the game’s clunky, archaic handling isn’t enough to make you feel like you’re playing a dud from the off, you’ll be in absolutely no doubt by the time the bullets start flying. For a game featuring deadly creatures that exist only to kill and could come from anywhere, Gearbox and Timegate have truly outdone themselves to make a game that feels this mundane and lacking in atmosphere. Colonial Marines is weighed down with boring combat, thick-as-pig-shit enemies and glitches galore.

The major reason for the game’s existence, the Xenomorphs, never feel like they present any substantial threat and they never attack in great numbers. You get the feeling that they’re only there to soak up bullets, rather than to provide any genuine sense of challenge or danger. Sure, they’ll climb out of vents and other nooks and crannies as they should, crawling around the ceiling before dropping on you, but their intent to kill could be called into question at every turn.

All too often I’d get this glitchy scenario where one alien would jump to the floor and walk across the narrow corridor, stop to look at me, then climb the adjacent wall and then start spinning around in circles before maybe looking like attacking me. Other times they’d run off in the opposite direction or dance around pointlessly as if uninterested in my presence. They’d also magically appear or disappear right in front of my eyes, or even lag. That’s right, this game can be so bad, it lags offline.

When they do directly attack, you can’t help but feel that everything is a little too centred on you, despite being flanked by gun-toting colleagues at all times. When Xenos descended with purpose, there were plenty of instances where my equally tasty colleagues were closer to the attackers and firing at them, yet they would only have their solitary eye on me. When this happened, they could seemingly brush off infinite rounds from my cohorts while jumping at me, yet, when I fired, they took so few shots to cut down.

That’s not to say that the Xenomorphs always ignore your colleagues completely; they do occasionally engage them in combat. Though when they do it’s with a rigid, awkward animation that plays out like a laughable stand-off in a poorly channeled multiplayer game.

When the human soldiers of the Weyland-Yutani Corporation show up, things get slightly better, but it’s still not much fun. Oddly, the human enemies actually take more damage, are more intelligent and are generally harder to down than the supposedly super-intelligent, speedy hard-skinned death machines.

The combat might fare a little better if it wasn’t hampered by such substandard level design and tedious missions, which essentially have you running from point to point through narrow corridors and hitting buttons when you get to the desired area. When the levels do open up to large areas, it’s always underused; you’re never swamped or on the back foot.

The game at least attempts to mix things up with the different types of Xenos, with ‘Lurkers’ and ‘Spitters’ backing up the standard soldier variety, while also throwing in the occasional boss fight, as uninspired as they are. Admirably, the Xenomorphs seem to be an equal opportunity race, thanks to one faux-stealth section that has you weaponless and stuck in a sewer with a ‘special’ blind variety of Xeno that can kill you in one hit.

The idea is to move slowly and not to make too much noise, but let me say that it’s a good job the Kinect mic isn’t in play here, as you’d literally die in-game from laughing at their animations. These blind aliens have another trick up their sleeves, though; they have the ability to run right through you if you’re in their way… sorry, no. That was a glitch again. Silly me.

No matter whether you’re playing on your own or in multiplayer, you earn XP as you play and this goes towards the game’s obligatory unlock system. Levelling up allows you to spend points on gun upgrades at any point, making changes such as adding laser-sights to weapons, reducing the recoil, or changing the rate of fire. You’ll find it makes very little difference over the course of the campaign, though. 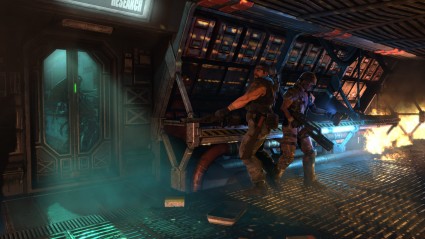 They’re coming out of… what I assume to be a wall?
I make no joke when I say that Aliens: Colonial Marines is one of the worst-looking games I’ve played this generation. The first thing that greets you is an unforgiveable amount of screen-tear, which is incredibly distracting as characters walk around, momentarily leaving their foreheads behind them.

It only gets worse, though. Texture pop-in is rife, surprising with its frequency, and at its worst it took anything up to ten seconds before something as simple as a wall could render. Not that the textures are highly detailed in the first place, though, beaten only by the human character models for the credit of ugliest aspect of the game.

To be fair, the Xenomorphs themselves are perfectly recreated and genuinely look great, but only when stood still. When they start moving, it all falls apart thanks to their jittery animations in the middle of combat.

In your living room, everyone will hear you scream…
It doesn’t take too long into the game before you become aware that the developers missed the mark quite considerably when it came to nailing the Aliens tone. The inane dialogue that the characters spew is the worst offender, missing the point completely and only exacerbated by lacklustre delivery. Original members of the movie’s cast step back into their prior roles, like Lance Henriksen as Bishop. Yet they really shouldn’t have bothered on the basis of these token, phoned-in efforts.

The one aspect that serves to provide any kind of atmosphere is the soundtrack, which is quite strong and thematic throughout, but is lost in a sea of absurd chatter and inconsistent sound effects.

Busy little creatures
“Complimenting” the single-player campaign, you’ll find the entire campaign playable with three others, plus four versus modes that pit Marines against human-controlled Xenomorphs. Both are problematic in their implementation, though.

While the co-op, for example, works well enough with its drop-in/drop out functionality, you’re essentially playing through the same dreadful campaign as you were on your own. Except now you have the added burden of occasionally helping people when they find themselves downed. Brilliant!

My short-lived experience with the versus modes fared slightly better, starting my run as a Marine, which provided an undeniable charm when working my way around the maps and using the motion sensor to track the opposing team’s movements. Sadly, though, the Xenomorph controls render total enjoyment of the multiplayer component impossible, thanks to a largely clumsy, unintuitive control scheme lacking any kind of grace. The differences in the three alien classes make little difference when you spend most of the time fighting against stubborn controls. Rebellion’s take on controlling Xenomorphs was simply better.

Still, you’ll be able to play as both species over the game’s four modes, with a straight Deathmatch mode flanked by three others in Extermination, Escape and Survivor. Unfortunately, I was unable to connect to many matches in anything other than Deathmatch, but it’s clear from the short tasters I was able to play that there are some nice ideas at play here. Sadly, even with an interesting reworking on typical demolition and survival modes, it’s all still bogged down by the game’s other issues. 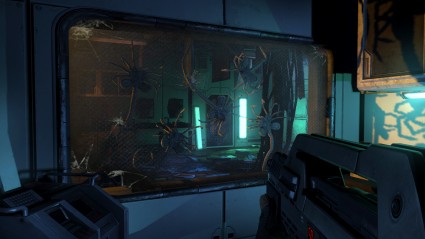 …or even this… I think you get the idea.

Predictable “Game over, man!” reference
Thanks to their excellent work on Brothers in Arms and Borderlands, there was a time where I would never have doubted Gearbox’s dedication to their craft. Alas, after the Duke Nukem Forever fiasco, and now this, I don’t think I can ever look at them with the same degree of trust ever again. That’s regardless of who fucked up more between them and Timegate in this particular instance.

Any joy that could come from stepping into the shoes of a Colonial Marine and visiting all those locations that you know and love from the movies is extremely short-lived, as this half-finished game only exists to shit all over itself at every single step. There are plenty of titles worthy of your cash hitting shelves in this first quarter of 2013, and this is certainly not one of them.