Having never played anything by developer Spiders I got a little excited at the thought of playing their latest game, Bound by Flame, especially since it’s in my favorite genre. I easily get sucked into the fantasy setting and tend to spend hours upon hours exploring, grinding and doing as many side quests as humanly possible.

The ‘inhabited by a demon’ premise was what really interested me in this instance, but unfortunately Bound by Flame didn’t burn all that brightly.

Bound by Flame follows the tale of Vulcan, a man serving as a powdersmith in a group named the Freeborn Blades. The ‘Blades’ are a mercenary group in Virtiel, a world decimated by a group of sorcerers and mages known as the Ice Lords. During the beginning, Vulcan’s body gets inhabited by a demon during a ritual that goes horribly wrong. Gaining the power over the demon’s flames, Vulcan may be the only hope for what is left of the people of the world. As Bound by Flame progresses, you are given choices that will affect events later on. This does provide some freedom and it’s very easy to make a choice that could end one of the NPC’s lives.

The world of Virtiel feels small in comparison to other games cut from the same cloth; this is no dungeon crawler and there is very little to do in terms of side quests. The world consists of small areas to explore, but it’s generally linear; once you move on to the next chapter, that area is lost unless you start the entire game again. This was a bit of a disappointment for me and a lost opportunity for Spiders, as it could have been so much more. Also, it’s pretty short; even if you take on board of all the side quests, you should be able to finish it in around seventeen hours.

A lot of time has been spent to make Bound by Flame look pretty but like most things, beauty is only skin deep. The visual focus has been spent mostly on the characters and although the backgrounds are very detailed, the depth of the world only goes as far as the area you are in. Only a few places feel wide open, but even then, in reality they’re closed in and still nearly feel claustrophobic.

Although the dialogue does consist of full voice acting, the narrative feels a little out of place as there is a lot of slang and unnecessary swearing within. There is also a slew of innuendo that seems even more out of character than the swearing. Although amusing at times, the conversations can be a little cringe worthy and this unfortunately does have a tendency to make you ignore the storyline and just run around killing things instead. There are some laugh-out-loud moments, but they are very few and far between. 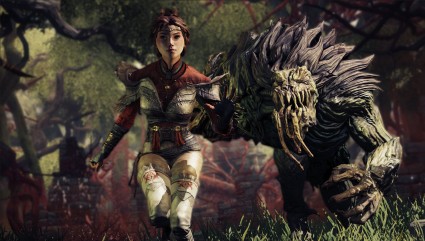 The combat seems clunky and slow, which makes the game unnecessarily difficult as a result. The normal difficulty is, in fact, quite harsh and brutal and, while there is a lower setting, that can still be unforgiving at times. Luckily you are taken to your latest save point, which is usually not too far from where you perished.

You have the choice of two combat styles which can be changed at any point at the touch of a button: Fighter and Ranger. There is a third class, pyromancer, but this class combines with both of the other two fighting styles. Being a pyromancer gives you the gift of fire and lets you tap into the demon’s power, adding a combative edge against enemies. Unfortunately, you are forced to use the power, as without your combat damage is significantly reduced.

Each combat style has its own skill tree, although the benefits of completing them is only really noticed when you finish the pyromancer’s tree. I didn’t understand why the pyromancer is even classified as a separate class, as it can be used at any time in either combat style. Having the ability to switch class is beneficial, but the downside is that it kills any desire to replay and see what skills a different combat style can bring.

During Bound by Flame, you get to choose to submit to the demon’s power or keep your humanity. The consequences of using the demon’s power boils down to the skills you can gain that aren’t obtainable via the skill trees, but the mechanic does give a sense of causality; it not only affects your character and their abilities, but also the way others perceive you. If you decide to have a change of heart and regain your humanity after previously submitting, you will lose the perks and you hear less from the Demon as you progress. With this in mind, there is some replay value, even if it’s to just see some additional story twists and dialogue. 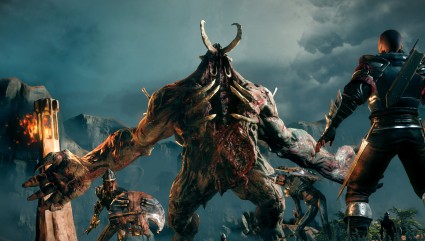 This is going to hurt, isn’t it?

One unique aspect comes in the upgrading of weapons and armour, as you can upgrade pretty much anything. Swords are found or purchased with a basic look, and you have the ability to upgrade the hilt and pummel. Armour allows you to improve a bit more, including enhancements to shoulders elbows and arms. Due to the parts all being different, this can expand your abilities and create stronger weapons, whilst also making visual changes to your character and his arsenal. This does allow stock weapons to gain that upper hand during combat, which means you don’t have to wait to level-up your character before you become more powerful.

All the parts are made from bits and bob you pick up as you travel through the world and each fallen foe drops something. If you don’t have the parts needed, you can also combine some of the already-collected parts to make other items. The same can also be said for the potions too, which can be made out in the field rather than finding a store to purchase them from.

The crafting system interested me the most as I spent quite a lot of time upgrading new weapons to help my character defeat the slew of enemies. It gave me something to do aside from the limited side quests, and although not making a massive difference on the gameplay, it was a nice break from combat.

I think I have burnt my fingers…

Bad points aside, there are some good ideas here but they’re fleeting. Praise, for example, should be given for the crafting system, its fresh approach towards gear and weaponry managed to keep my attention where the general game design did not.

Although I wasn’t exactly won over by Bound by Flame, it is maybe worth a passing glance; just don’t expect it to leave a lasting impression.