The first time I ever played Pokémon was as recent as last year, shortly after my wife and I had treated ourselves to a shiny new 3DS each. Somehow, neither of us had managed to try any iteration in this hugely popular phenomenon before, a property that has gone on to span countless video-games, card games, movies and cartoons. I’m not even sure what it was that made us take the plunge on trying it (her with Pokémon Black, me with White) other than a curiosity into what the fuss was all about.

While her interest in Pokémon has since only grown, I saw it as an enjoyable JRPG-lite. It was fun, definitely, but not even the collection aspect managed to keep my usually OCD-addled brain from moving on to other games shortly thereafter.

I’ve been pulled back in it seems, though, as Tecmo Koei put their own stamp on Nintendo’s property by combining it with their series, Nobunaga’s Ambition; a strategy game rarely seen outside of Japan, one that’s also very different in tone to Pokémon…

Can this little mash-up even work?

Holding you to Ransei…
It shouldn’t work, clearly. Nobunaga’s Ambition (seemingly, I’ve never had the pleasure) has been a series that focuses on historical battles set in feudal Japan. Pokémon is that cutesy JRPG in which players trap local wildlife in tiny balls before forcing them to fight with one another. Their only relation is that they’re both turn-based in some respect, so mashing these two franchises together would be commercial suicide, right?

Wrong. It works pretty damn well in execution, taking on much of Pokémon’s philosophy in styling and tone, and loosely applying it to ancient Japan.

This story takes place in the Ransei Region; a continent divided into 17 different Kingdoms. Each Kingdom is protected by Warlords who, unlike their real-life counterparts, use Pokémon in battle. You, as the player, hail from the Aurora Kingdom; a peaceful place in which you act as one such Warlord.

The neighbouring Kingdom, Ignis, suddenly makes their move on Aurora, but the warriors of Aurora fight back and win, taking control of their attacker’s Kingdom in the process. Afterwards, it becomes clear that all the other Kingdoms have also become hostile with one another. This is all thanks to the belief that controlling the entire region will see the return of the legendary and powerful Pokémon, Arceus, who created the Ransei Region.

With the help of their second in command, Oichi, the player must try to unify the Ransei region, by taking it over entirely and restoring the land to a peaceful time… 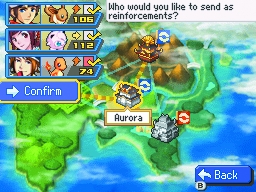 Pick a Kingdom to take over, do battle.

A monster game of chess…
Straight off the bat, Pokémon Conquest impresses with its slick and easy interface, and will remind players heavily of games grid-based strategy games like Final Fantasy Tactics, or more recently, Ghost Recon: Shadow Wars on 3DS.

You pick the neighbouring Kingdom that you wish to overthrow, choose your team from your own army and then battle them for control. In combat, you move your Pokémon around by clicking on them with your stylus, the floor of the environment will highlight all the places that they can move to and you simply click where you want them to go. Once they’re there, you can select whether you want them to attack (if an enemy is within their attack range), or whether to wait. Once you’ve made your decisions with all your available Pokémon, it’ll be your enemy’s turn to make their move, before you get to go again.

Often the fight will revolve around you beating all the hostile Pokémon within a set number of turns, although it does mix it up occasionally with a nice ‘conquest’ style fight type, where you must seize control of all the flags on a level to be victorious.

There are a number of outside factors that you’ll need to take into consideration when approaching the battles. The most important aspect is considering what type of Pokémon that your opponent will be using and configuring your team to give you the best advantage.

The Kingdom of Greenleaf, for example, uses mostly Grass-type Pokémon, so capturing and utilizing Fire-types is a must beforehand. The Violight nation use mostly Electric-type Pokémon, so you’ll find value in having Ground-types among your invasion force. You’ll also need to think about the type of environment that you’re fighting on, and it gets a little trickier as you progress, but the typical Pokémon rules will always apply.

Each Pokémon in battle needs to be paired with a warrior in your army. Before you move your Pokémon, you can access the Warrior menu. This lets you use items or potions to support your monsters, or utilise their unique personal power. In Oichi’s case (your second in command), she can heal all Pokémon on the field, while other warrior’s powers may relate only to their own creature, increasing defence or attack. These powers can only be used once per match; so make sure you choose your timing carefully. 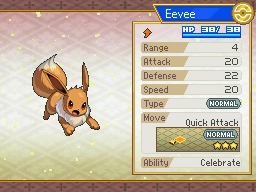 Although you start with only one member of your army, you’ll need more members to achieve your goal, and enlisting new warriors is pretty simple. If, in battle, you can defeat your opponent in four turns, or finish their monster with a Super Effective, they’ll be recruitable once the battle is over.

Once employed (you can enlist up to 200 warriors, likewise Pokémon), you can assign a number of different Pokémon to them; although, they can only take one into a fight at a time. Because of the calendar system in place, each warrior can only fight once per in-game month too, so you need to be careful not to use up your big-hitters if you want to fight on two fronts at once.

By consistently using the same Pokémon with one warrior, the link between them will grow, and that will mean they’ll be become more effective and level up quicker with that warrior over the others. Warriors also have a perfect match out there, so even the most useless of Pokémon can become useful with the right trainer. Pokémon still evolve under the right conditions too, and so do their warriors through ‘Transforming’, which offers some general capability upgrades.

As well as attacking, you’ll need to defend your captured Kingdoms. As you grow your army, you can send warriors to your captured Kingdoms to protect them, and get them to develop the area as you see fit. Stationing the right types of Pokémon at an area based on the nature of their environments is as key to when you first sought to capture it, giving you an advantage should you find yourself under attack.

As you can probably imagine, whether you’re in combat or in-between and managing your troops, there’s a lot going on at once and a lot to think about. Thankfully it’s a game that’s never overwhelming, never frustrating and never once a chore, running at a comfortable pace throughout. While the main campaign isn’t too taxing, it’s worth mentioning that there’s tons of content, with plenty of harder missions to play once you’ve finished the main story.

You should note that there’s also local multiplayer, something I’d reserve for its own section of a review, but without someone to play against I’ve been unable to test that feature out. It’s there if you want it, though. 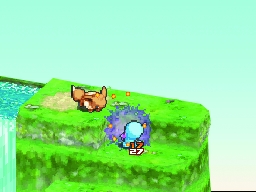 These are seriously the largest screenies I could find.

It’s Pokémon, alright…
With much of its visual cues taken from the Pokémon games, you’d be forgiven for thinking that it was developed by Game Freak rather than Tecmo Koei. Even the historical figures that usually look menacing in Nobunaga’s Ambition are drawn in an cutesy anime style, bearing more similarities to their Pokémon training counterparts than their real-life selves.

Being a standard DS game, it’ll seem a blocky, less-refined affair if you’ve been playing 3DS games recently, which at first will make it look a tad dated. Still, it’s entirely charming in its design throughout and that just about makes up for it.

Oi! (chi)
The music here somehow manages to capture both of the game’s personalities, with a soundtrack that successfully melds Pokémon music with themes of feudal Japan; no small feat. It’s a pleasant musical outing that definitely enhances the game.

With no voice acting, the sound effects that fill the void are ripped right from the standard Pokémon games and are low quality, but with a distinct retro vibe. You’ll likely either dig this or you won’t, with little in-between. For me, it added a little retro magic. 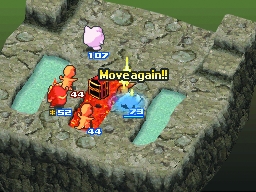 You have to be as careful of the environment as you do your opposition...

Super effective?
Pokémon Conquest is a charming, fun and elegant little strategy game that has very little to fault. There’s more than enough depth and micro-management to keep ardent tacticians satisfied for ages, while I’d be just as happy to recommend it as a starting point for genre newcomers looking to get outside of their comfort zone. That balance can a difficult line to straddle, but Tecmo Koei have handled it superbly, providing a game that not only manages to pay respect to both its forerunners, but is easily recommended on its own merits.