You know what’s a good film? Aliens. This 1986 sci-fi classic from James Cameron is still a major influence on both games and cinema and while also providing a huge number of quotable lines that come in handy when playing Valve’s newest co-op shooter, Alien Swarm. Based off the same tech as Left 4 Dead and Half Life 2, is this game a worthy successor to the other high quality games in Valve’s collection or is it “Game Over Man”?

For those who don’t know, Alien Swarm was originally an Unreal Tournament 2004 mod from a team calling themselves Black Cat Games. It was an isometric third person shooter which took your team of four marines of varying classes into an alien infested outpost and requiring you to fight your way through. It is a classic and much beloved by the PC gaming community, with many people still busting it out at LAN parties when gamers feel the need to shout and scream when an idiot gets hold of a flamethrower and runs around burning his team members. As Valve is known to do, they swooped in and bought the award winning team before putting them to work on the Left 4 Dead games where their knowledge of how to make massed hordes of enemies scary was put to good use. It also seems that they were working on an updated version of the Alien Swarm game ready to be released.

The plot line takes a lot of inspiration from Aliens with your four man team being deployed onto the world of Jacob’s Rest to find out why the local outpost has suddenly lost contact with the outside world. Luckily you all seem to know what you’re getting into and so you land with a load of weapons and ready for a bug hunt. As the campaign progresses from the outside of the facility to the centre via the residential areas and a nuclear reactor, you eventually realise you are going to have to nuke the site but, unfortunately for you, not from orbit.

“They’re coming outta the walls. They’re coming outta the goddamn walls”
Alien Swarm keeps the play style of its predecessor as an isometric shooter; I would call it dual sticks apart from the fact it entirely mouse and keyboard driven. Before each mission you choose two main weapons and an offhand item to take with you as you go crush some bugs. The weapons are all the usual staples such as assault rifles, auto-guns that lock onto enemies and of course the flamethrower (which gives you the opportunity to go and play Aliens) but there are also weapons like the Telsa gun or the chainsaw which are a blast to use. The main slots are also home to the sentry guns which can be dropped and picked up again as well as providing some serious backup in a fight. The offhand is for slightly more unusual gear such as welders, for blocking doorways, armour upgrades and rocket boots.

Your choices play a huge part in selecting your role for the mission as well as your character class. There are eight different characters divided into four different classes with each having exclusive equipment and bonus to certain play styles. Medics heal, Special Weapon guys get the big automatic guns and Officers grant certain buffs to the rest of the team. However, the most vital member of the team in many missions is the Technician. This class hacks doors and other terminals which is the primary way for the team to precede forward. However, they can also force the game to restart missions if they get munched up before they unlock the vital doors. 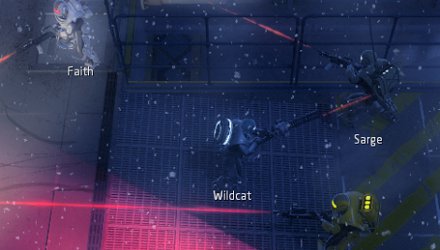 In mission, the game plays very well. Aliens of different types will swarm upon the squad as they move through the abandoned base and you have to shoot back. However, you can’t simply open up and fire away without care (Remember, Short Controlled Bursts). The game has quite punishing friendly fire and many a player has cursed the day his team mate was born after a misplaced grenade or shotgun blast has ripped him to pieces mid-skirmish. However, the damage the weapons inflict on your teammates also rips the bugs apart and you certainly need to rip them apart as fast as possible. The Swarm is primarily fast moving close combat aliens (luckily without the acid blood) but there are also ranged aliens, explosive aliens and bigger, heavily armoured brutes that require you to pin and flank them in order to hit the vulnerable rear.

The variation is enough to keep things interesting but in a game featuring massed swarms the variety can often be troubling when the screen fills with bad guys. Most deadly of these though are the parasites which are the team’s version of the headcrabs or facehuggers. If they latch onto a marine you don’t have much time before the infection takes control and they explode, releasing more parasites to come and munch the rest of the squad up. The only way to fix it is to a medic fast. This mechanism is great fun especially when it becomes too late and you have to get the flamer on him. The game has also been inspired by Left 4 Dead with its several finale events at the end of each level. One of the best has to be the cargo elevator which you have to defend as it goes down into the rest of the facility as literally hundreds of gribblies come crawling up the shaft towards you. There are also others such as one where you have to stay in the light as you move along which help to change up the action.

“What Is That Thing? It looks disgusting!”
The Source Engine is six years old by now and although it is slightly creaky round the edges, the newest version now looks rather nice. This is in part due to the addition of some newer features that will be introduced in Portal 2, which, to go all technical, includes depth of field, dynamic lighting and a third person camera. Basically, this means the game focuses you to your character while making the dark seem extra dark with the flares, explosions and gouts of flame throwing shadows of chittering creatures onto the walls like in every other horror film. Unfortunately, straight after release there are a few graphical bugs.

There are no real gameplay issues with them but they can look pretty bad especially when it makes the Tesla bolts disappear and the background goes orange. The trooper models are a little utilitarian but they are easily recognisable which class is which from a single glance. The Swarm on the other hand look as revolting as they should. One of the worst is the Boomer, a walking sack which swells up and explodes explosive goo balls if a player gets too close. It just looks horrible especially with the body parts it leaves lying behind. 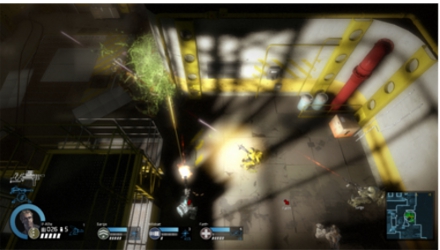 “What the hell are we supposed to use man? Harsh language?”
Unfortunately, the sound is one area where the game’s mod origins come to light. All the sounds are passable but the voice over for all the characters is rather annoying. They are all badly accented stereotypical voices (French guy, German guy etc) and luckily the game plays them quietly as it’s drowned out by the automatic fire. One exception to the VO is your Lieutenant on the ship, who sound just like the weary commanding officer you would expect from these things, and is a great addition. Gunfire and equipment is also just passable but it does suit the guns. Many of the sounds are also recycled from other Source engine games which can be rather strange. The aliens themselves sound alright but unfortunately this isn’t that good when one of the main ways of scouting head is to listen. Especially when one of them sounds like the dying giraffe from the South Park movie. The sounds do the job but it doesn’t quite have the Valve polish.

“Anything Else Sarge?”
A point I have to make about the game is that it is a co-op experience and the kind that only really flourishes when played with four people. It is a deeply tactical game and I recommend you play with a group of people on microphones to make communication a bit easier. However, it is playable in a single player mode along with limited AI control and marine switching but it also cuts out a lot of its parts such as the steam achievements and progression. These two things are the real points that will keep you playing. Many of the better weapons (including the infamous flamethrower) and gear are unlocked as play and level up. XP is gained through the stats at the end of missions based on objective casualties and such like as well the achievements.

These are all great with a mix of the easy ones such as wielding doors shut or killing off a certain number of bugs with a certain gun all the way up to  speed running through the game. Additionally for all the PC Team Fortress 2 fans out there, there is one achievement which also unlocks a hat for TF2 which is pretty good, especially as it jiggles around when you run. I love the fact Valve are more than happy to have other games add stuff into their online behemoth.

“Hey Valve, have you ever been mistaken for a bad guy?”
Overall, all the little things from the game help to create a great little cooperative experience that perfectly captures the feel of Aliens, but the game also makes it really tense as you inch down darkened corridors with your motion tracker beeping away. Alien Swarm would be a pretty good game if sold by Valve. The fact it is given away to every Steam user makes it an unmissable PC release almost guaranteed to give you several hours of great fun. Get your friends, jump in the game and get killing some bugs. Why? Because I love the Corps! Buy… Download it now!