I’ll be brutally honest; I’d never heard of Krome Studio’s Blade Kitten before being offered the review code. After a short research session courtesy of Google, I was able to determine that it was by the guys behind MS’s much ignored (by me anyway) Gamesroom and based on a webcomic of the same name by the company’s co-founder, Steve Stamatiadis. With this in mind, I had no idea of what to expect going in. To be honest I’m still not entirely sure what I think at the moment…

Despite offering no clue in the title, Blade Kitten is actually the first of an episodic series set prior to the events in the web comic. In the game, you follow the adventures of a Breaker (bounty hunter) who is ludicrously called ‘Kit Ballard’, a survivor of a race of half-human, half-cat people. You must hunt down her bounty, which comes in the form of an alien cult leader, Terra-Li, who is hiding on a planet called Hollow Wish. Kit, after arriving on Hollow Wish, is confronted by a rival bounty hunter called Justice Kreel who steals the keys to her ship and takes off leaving Kit in hot pursuit.

To be honest, that’s all there is to the plot. To say that it’s based on a comic, the story is water thin and after taking time to look at the comics themselves since playing the game, there was honestly a lot of potential here. What plot there is takes place in cut-scenes which are generally void of any useful information or anything of note (other than poorly written and generally benign dialogue), simply serving as an annoyance that stops you from getting back into the unrelated gameplay. There’s no focus or drive here and in a game that simply functions in most of the important areas and I don’t think this will be a story that is enough to help people past the finish line. This is a real shame, because the originality in the character designs and settings are definitely not without their charms. It’s almost as if Stamatiadis failed to understand his own creation and a step further towards the webcomic would have definitely provided a stronger and more entertaining yarn to tie the events together. 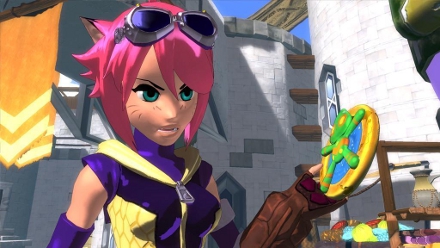 What is it with anime and cat people?

Reflexes like a cat?
In the meat of Blade Kitten, you’ll find a simplistic 2.5D platformer that in level design follows the Earthworm Jim blueprint, with huge, sprawling levels that will see you traversing in all directions before you hit the end of each. The controls are basic, with the X button used for jump, short range slashes with the Square button (holding it will produce a protective shield) and long range attacks with Circle. For talking to NPCs and as the game puts it ‘all the non-fighty stuff’ you simply need to hit Triangle. There are some other rarely-used functions mapped to the shoulder buttons and these come in use for particular puzzles. There is also a stamina bar to take note of alongside your health bar, which depletes the more you sprint, attack or use special attacks but its presence is barely felt over the course of the game, being more of a slight hindrance than an enjoyable and challenging gameplay mechanic.

During the early portion of Blade Kitten, Kit will encounter and befriend a flying cat-thing called Skiffy, who at times you will be able to send to collect ‘Hex’ (the game’s currency) from unreachable areas. This usage seems a bit arbitrary and adds zilch to the gameplay experience. Don’t get me wrong, the currency comes in use, allowing you to pause the game at any point to buy new swords, health/stamina and outfits, but using Skiffy seems a pointless exercise with no function other than ‘press a button to gain in-game funds’. Skiffy isn’t the only native creature that Kit will encounter, as in some levels you’ll need to ride a dinosaur-style creature called a ‘Noot’. These segments do help vary the gameplay and they do also enable a slight puzzle element in some of the levels, as well as help you reach some of the hidden items. Alongside finding cash, you can find other collectables, such as birds, which Ballard gets very excited about but the game never makes a point of explaining why.

Blade Kitten will almost certainly feel a basic yet clumsy affair to many early on, the latter being felt heavily thanks to poor animations. Couple those complaints with a forgettable first half and you’ll find that Blade Kitten struggles to keep things interesting throughout. It’s strange, I thought I had the game totally pegged by the halfway point as many would, but then it started throwing new things at me and I started to warm to it the more I played. Had I reviewed this on the opening portion alone, which I’m sure many reviewers out there may well have done so believing they’ve seen all it had to offer by that point, it would have been an instant avoid. Unfortunately, while it throws up this new and more interesting stuff later on, it’s not enough to save it from being an average platformer.

Cat’s eyes
Graphically, Blade Kitten is a colourful but underwhelming prospect. The main character designs are interesting and visually appealing enough (if a little too ‘anime’ to the point of stereotyping), they are at least very true to their inspiration. The environments attempt to offer up some level of variety but you’ll be hard-pressed to point to anything truly remarkable when the game is over; it’s nice, effective but very inoffensive. Blade Kitten is far from ugly, in truth it’s actually rather good looking in its styling for the most part, but the visuals are forgettable overall. 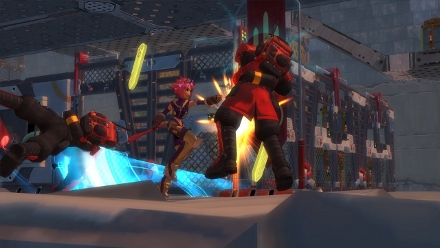 You'll see this a lot over the course of the game...

The cat’s meow
The soundtrack is easily one of my favourite things to come out of playing Blade Kitten. It was the first thing that struck me about the game and that began as early as the title screen with a catchy funky house number borrowing heavily from Japanese themes. It’s a combination that shouldn’t work but it does, very well. The rest of the soundtrack is equally well composed and kept me entertained throughout and even the parts of the score that one might describe with the usually derisory term of ‘elevator music’ are at least worthy of some foot-tapping in their own little way.

The same can’t be said for the voice acting, which is probably as bad as I’ve ever heard in a video game. The voice talent isn’t really given much help from the pitiful writing but with unimportant and almost redundant wittering all around, it is Kit’s voice itself that provides an example of everything that is wrong with this area of the game.

Top Cat or weak as a kitten?
As a whole, Blade Kitten isn’t an awful game and it does have some things to like along the way, but by the time it introduces the best of what it’s got to offer I’m afraid that it’s far too little, too late. If it wasn’t for review purposes I myself might not have given it the chance to open up as it eventually did and that’s the most bizarre thing about the game design here. Probably worthy of a try but don’t expect to reap instant rewards from a largely bland title.