It’s fair to say that the Wii has been met with its equal shares of excitement and disappointment in its lifespan. While the Wii was a cutting edge, ground-breaking console upon its launch and instead of capitalising on the franchises that many associate with Nintendo, many forgettable titles have instead filled the void, angering die-hard Nintendo fans of old and causing many to write the Wii off as a ‘true’ gaming console. Many had even started to believe that after releasing the likes of Wii Music, Wii Sports Resort and Wii Party, Nintendo had stopped listening to their fans and were going in a whole other direction.

Then E3 2010 came along and was like a celebration of everything you’ve ever loved as a Nintendo fan throughout the years. There was Zelda, there was Goldeneye, we had Golden Sun, a re-boot of Kid Icarus, tons of third-party support and even a Mario game sneaked in, but the best piece of news of all? Donkey Kong Country Returns! One of the Super Nintendo’s most beloved franchises reintroduced for the Wii. Brilliant!

Naturally, as a fan of the original, I was excited and after getting some early hands-on with it at Eurogamer and reporting my findings here, I was eager to see what Nintendo and Retro Studios have come up with after a decade.

How did it hold up? Is it still the marvel that I remembered it to be?

In the jungle, the mighty jungle…

Donkey has come a long way from capturing princesses and throwing barrels at Mario. While he’s more of a family man these days, he’s still a very dangerous foe and takes it very personally when anybody doesn’t treat him or his kin with respect. So naturally, he’s more than a little upset when the hypnotic abilities of the Tiki Tak Tribe have drawn the inhabitants of Donkey Kong Land to steal all the family’s bananas. One thing you should know about the Kongs, you don’t steal their bananas otherwise they get mad; this ape wiped out the Kremlings don’t you know?

While he may well be formidable on his own, he isn’t naïve enough to think he can overwhelm the vast numbers of inhabitants on the island and has brought back his old pal Diddy to help out. Together again, the pair set off to retrieve the treasured family possessions and restore balance back to the island. Sounds easy right? It’s not.

Returns isn’t a direct sequel to the original Country games and serves as more of a spiritual successor. Developed by Retro Studios (whom you may remember are the developing house behind the phenomenal Metroid Prime series), the game remains very faithful to Country’s 2D platforming escapades, but also reworks things for a modern audience. One may wonder why Retro have suddenly jumped from a FPS to a platformer. Naturally, this is a very different style of game they’re handling here and so there is obviously going to be some trepidation from fans about jumping aboard. However, what you may not know is that the head of Retro Studios was actually very instrumental during the original Donkey Kong Country games on the SNES as will become very evident to you when you play the game. DCKR completely captures the essence of a Nintendo product of yesteryear, better, in fact, than Nintendo have been able to do themselves of late. While some may see this as controversial, I feel DKCR is the most authentic, diligent platformer released under the Nintendo banner in years. 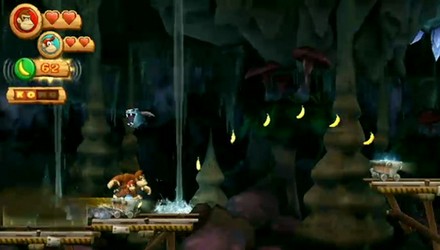 …The Ape ain’t sleeping tonight!
The game will be instantly familiar to anyone who played Donkey Kong Country as you’ll find yourself swinging across vines, throwing barrels, collecting letters that spell out KONG, even coasting on mine carts and collecting Banjo Kazooie-type jigsaw pieces which you’ll need to collect throughout the level. The game also inherits its predecessors difficulty and I can tell you outright, you are in for a challenge. The game can be controlled two ways, either flipping the Wii Remote horizontally and controlling like a game pad, or by connecting the nun-chuck and playing with the remote vertically. My personal preference was to use the Wii Remote horizontally as it felt more appropriate when playing this style of game.

As before, Donkey can jump on some enemies to kill them, however some he can’t. This is where using the ‘ground pound’ comes into play. The ground pound can also be used to uncover secret items, as well as to weaken some of Kong’s tougher opponents. The controls are very easy to get into and the game plays naturally to anyone whose familiar with the genre. Shaking the remote to groundpound can be a bit annoying at times, especially if it’s over an extended period, but it fits in terms of the actions being performed onscreen and does add an authentic element, even if it is a bit tedious.

Whether or not there are two of you playing, Diddy will be at Donkey’s side and serves as a way to help boost Kong’s jumping. Diddy has a jetpack on his back, and when he sits on Donkey’s back and you attempt a double jump, you’ll be able to soar further across the skies. If Diddy is killed in action, the DK barrels scattered through the levels can be picked up, thrown and retrieve the monkey from captivity. 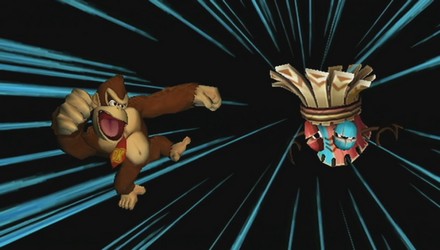 There are quite a few things that can be unlocked in the game, most of which will be made easier by purchasing items from Cranky’s shop. You can purchase balloons which are actually extra lives for Donkey, you can purchase a key to each world that unlocks all the areas in the World, there’s a parrot who will help you search out the secrets in each level and more. Cranky is the only other resident you’ll recognise from previous DKC games aside for Donkey and Diddy.

DKCR is a difficult game, you’re not going to coast through this easily, reminding you of how platformers used to be back in the 8-16bit era, however the game is never completely unmerciful. If you happen to die eight times or more on any level, much like New Super Mario Brothers, you can use the Super Guide feature which will allow you to fly through a level start to finish as Super Kong, although any collectibles obtained during the run will not count to your final score at the end of the level. The game also features a time attack mode which will enable you to test your skills and see just how proficient you are at navigating Donkey’s jungle.

Towering heights
Donkey Kong Country Returns is essentially done in the same style as the ’96 DKC games for the SNES and not the rather poor 3D Donkey Kong offering on the N64. I’m sure Nintendo could have made a new DK game based in 3D just as they did with Galaxy and make it work, but what Retro Studios have done here is perfect and totally fitting for the franchise. The game looks beautiful in its own regard, it’s a 2.5D game but it also uses graphical touches to its own benefit. One level in particular is so bright that Donkey, Diddy, the whole environment and the enemies will appear as silhouettes throughout, giving a totally different feel from the green jungle sequences you would have been used to by that point. Just occasional touches such as these really diversify the feel of the game, always keeping it fresh and exciting. There’s lots of variety in environments showcased, and as such, gameplay mechanics are offered a lot of freedom. You’ll use minecarts in underground caves, go sailing through the skies, avoiding bombs from passing cruise ships, you’ll be shot into the far background from a barrel cannon and be able to control your characters on a background level, meaning there are two environments on the screen at the same time.

This is an incredible return to form for Nintendo and is exactly the type of game the Wii has been needing since 2006. 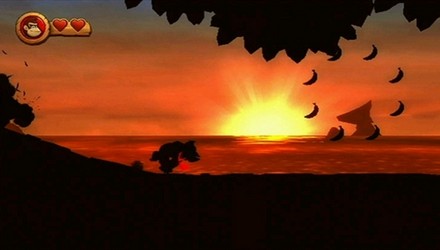 Graphics at some of their most beautiful

Ooo… Oooo… Oook
If you feel that the game has changed its look too much that it is unrecognisable for you, then the sounds will definitely jog those retro memories. The familiar background tracks you were used to from DKC are back in the game and obviously remastered with a full orchestra. They sound better than ever and totally get you into the mood to play the game from the off. Perfectly rejuvenated, you’ll feel right back at home with this game in no time.

Not just that, but the game takes advantage of the Wii’s unique in-built speaker in the remote, whether you’re collecting letters, bananas, pounding the ground and beating on enemies, the remote keeps you focused on the action and helps with the immersion of the whole experience.

Two monkeys are better than one?
As you’ll have guessed by now, a second player can join in and play as Diddy Kong. The co-op on Country Returns is brilliant, it never gets frustrating, you never really seem to get in one another’s way, and you’ll even find you talk strategy as you progress through the level. This can be vital as you make your way through to the later stages of the game as the levels difficulty gets ramped up and you’ll find numbers can be overwhelming. As co-op experiences go, this is one of the best I’ve seen this year and quite possibly, the best on the Wii right now. Not only is Returns a fantastic single player experience, it’s an equally excellent co-operative foray.

King of the Kongs?
We’ve waited a long time for Nintendo to start releasing games of this calibre for the Wii. We’ve been patient, we’ve waded through the crappy sports titles, the annoying party games, all the yoga and fitness jaunts and now we’re finally here. Five years into the consoles life-cycle and we’ve finally got something to shout and scream about. Mario Galaxy is great but it’s the face of new Nintendo and totally owns the 3D platforming plateau. Donkey Kong Country Returns is a reminder of how gaming used to be and can fill you with elation and excitement from just loading up the title screen. This is an absolute must-own Wii title, it’s the game Nintendo fans have been asking for, this is the game they’ve been dreaming of. With Donkey Kong Country Returns, Retro Studios have recaptured the magic of Nintendo and created a game that is absolutely barrel-bustingly brilliant!