If I was to say to you that Kung Fu Panda 2 is one of Kinect’s better games, you would either laugh in my face, or say, ‘Really? Well, that proves it’s all a kiddy fad then!’

Let’s just say that the game isn’t a direct translation of the recently released movie. Let’s say that it may as well be a self-contained story in the Panda’s universe. It’s actually set after the events of Kung Fu Panda 2, but with all the same characters you’ve come to know from the films. In many ways, I respect it for not just being a straight film-to-game adaptation, but, to be honest, there isn’t much of a story here, more a series of events that just happen and are loosely strung together. Gorilla invaders attack the village, Po leaps into action with the Furious Five and battle commences. This isn’t the invaders end-game though, and among them are Wolves and Komodo Dragons, all of whom appear to be looking for treasure within the village.

Just as the invaders are about to escape with the pretty treasure, Po and the Furious Five interrupt the heist. However, the leader disappears and the Kung Fu Masters are distracted by a serious of minions. With rage in their bellies and determination in their hearts, after defeating the minions, Po and the team go in a search of the rebel leader, to make him regret ever laying siege to their beloved home.

A very paint-by-numbers story, one that is directed by the mini-games that make up the core gameplay in Kung Fu Panda 2, rather than them being implemented into a story. Did you really expect the contrary? 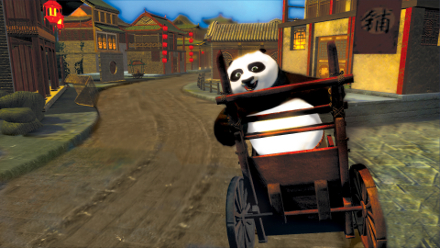 High kick, low kick
Kung Fu Panda isn’t just ‘Better with Kinect’; it needs Kinect. The game isn’t like the original, a glorified platformer using a control pad, in fact, it doesn’t require a pad at all. There isn’t even a platform to be seen. The game focuses on Kinect’s strengths and works toward them. At first, you’ll be presented a Tutorial where you’ll be taught how to fight in combat by raising your arms left or right to block, ducking and weaving to dodge attacks and naturally, throwing punches and kicks to attack your opponent.

The Tutorial covers the fighting part of the game, which, does actually cover a good proportion of what you’ll be doing in Kung Fu Panda 2. From the outset, I could tell that this was a much more polished, refined, well implemented fighting mini-game when compared to the entirety of Fighters Uncaged. Yes, I am comparing the two games, and yes, I am telling you that Kung Fu Panda 2 does fighting better than Fighter’s Uncaged!

While Fighter’s Uncaged was sloppy, unresponsive, sluggish and soulless. Kung Fu Panda is charming and actually responds to your gestures and gets them right … most of the time. When you throw a punch, so does Po, same for a kick and same for when you perform a finishing blow when an enemy has bare-minimum health. Even the weaving and blocking is quite well executed, however the ducking leaves a lot to be desired. Rather than looking as if I’m trying to suck off my own penis in front of Kinect, I may as well just not bother. Nine times out of ten, you’re going to get hit if you try to duck. Rather than blowing your back out, save your self the bother and take your licks.

Apart from that, this is a better fighting game than Fighters Uncaged and, apart from the boxing on Kinect Sports, is the best fighting experience I’ve seen on Kinect so far. Although, once you’ve got the moves down, there really isn’t much diversity here and all fights start to feel the same, no matter who you’re up against. 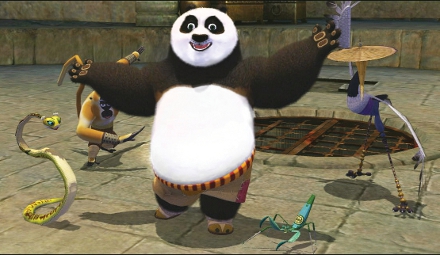 The gang is all here!

That’s not all Kung Fu Panda is about, though. There’s also a racing game, Rickshaw Racing, that has you chasing an opponent, dodging obstacles as you go, weaving left and right, and blocking projectiles that are being thrown at you. Every time you make a successful block, the object bounces back into the direction it came from and smacks the enemy right on the noggin. Do this four or five times, and you’ve beaten them and won the ‘race’.

There’s also a noodle making game, where you are given orders by your customers, categorised by colour. Po needs to select the right coloured bowl, stir the noodles as fast as possible, and dish it out to the patrons.

These mini-games are woven in between cut-scenes and excessively long loading screens, making up the bulk of the game. Seriously, do you like seeing the Kung Fu Panda 2 logo and a picture of Po throwing a kick? Good, because you’ll be seeing a lot of that.

I look like a real Kung-Fu Master
The game looks cute, cuddly and warm. It looks very Kung Fu Panda and that’s the highest compliment I can pay. When playing the game, all the animations and character models are well designed and fulfill their aim to be solid replicas from the movies.

That said, the cinematics in the game are very grainy, choppy and look as if they’ve just been slapped together in a rush to meet a deadline. They do the job, but you the transition between cinematic and gameplay is far from seamless and that is more distracting than anything else.

Couple this with excessive (and I do mean excessive) loading times and you’ve got a pretty good idea what’s going on here.

Call of the Wild.
Another cool feature in Kung Fu Panda 2, during battle, you can call out to a member of the Furious Five and have them join in battle to finish off an opponent if you feel your Kung Fu moves aren’t exciting enough for you. A subtle touch added to the game, again using the Kinect peripheral effectively and taking advantage of it to the full.

Most of the film’s cast is back and voicing the game, most notably, Jack Black is back as Po. I always find it a relief when the games voice cast remains similar to the source material. It adds an air of authenticity to the game and makes it seem more official, rather than something a bunch of fanboys put together in a garage.

The soundtrack is very Japanese and adds further authenticity to the product, making you really think and feel like you’re on an adventure with Po.

Everybody wants Kung Fu Fighting?
Despite the bugbears, I’m not kidding when I say that THQ have done a bang-up job making Kung Fu Panda 2 on Kinect. While I haven’t played the game on other formats, I can tell you that Kung Fu Panda 2 is actually a good, solid Kinect game. It’s responsive, it uses all the features and is fun to play. The problem is, the game has no real substance, and is ultimately just a collection of mini-games that are easily mastered.

If you have kids that are looking for more Kinect-based entertainment and they’re fans of the films, this is a great investment. Kung Fu Panda 2 for Kinect is a real standard-bearer for films-to-games adaptations, but it’s also a good showcase of how games should use Kinect going forward.