When I first heard about Metro 2033 a year or so ago I was more than a little intrigued. After all, a game based on a Russian novel, set in the underground tunnels of the Russian Metro in a post apocalyptic future battling both human and mutant opponents seems to tick a fair few boxes. However, as the release date drew nearer the understated press releases and the decision not to release a demo left me more than a little apprehensive.

So is Metro 2033 the refreshing change to the standard FPS fare that we see all too often or does it fail like so many before in a cloud of failed gimmicks and shoddy gameplay. Read on to find out.

Fear the Future!
You take the role of Artyom, a young man born in Moscow but raised underground. You and your kin now live in the Russian Metro in station town ships after a nuclear fire all but wiped out mankind and left the Earth’s surface a “poisonous wasteland” (nothing particularly innovative so far). The game takes you on a journey through the Metro tunnels in a bid to save your kind from the increasing number of mutants descending from the wastelands above. 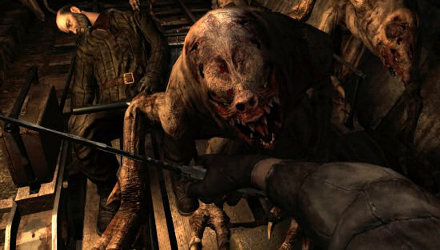 You are introduced to the game venturing outside with an unknown (at this stage) companion where the air is thin and the land desolate. You are joined by some additional survivors before your companion points you to the west, where you see why the game’s tag line is “Fear the Future”. A stampede of what appears to be a thousand or so mutants twice your size and uglier than the love child of Shrek and Grotbag start to file past. At first they seem oblivious to your presence but then the other members of your party decide to open fire and all hell breaks loose. Just as you fear for your life the game cuts and you go back eight days to where it all began.

Euro Tunnel
An old friend of your dad’s named Hunter comes to visit your town and brings with him tales of the dangerous tunnels beyond the tranquillity of the station you call home. You and your pop go and meet the visitor and are soon ambushed by the tunnel trash from beyond the walls. It seems the only way for mankind to continue to survive is to take the fight to the mutants and off goes Hunter again charging you with passing on the knowledge if he doesn’t return. 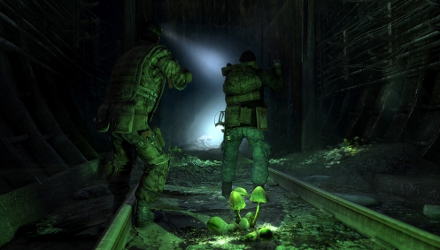 Get ready to run!

The majority of the game sees you making your way through the tunnels en route to another town as you aim to achieve the ultimate victory of saving your comrades. Along the way you face a mixture of rogue human elements and mutant creatures alike. The controls are fairly standard FPS fare in the main with your RT your weapon fire, LT your scope and RB used to reload. You have a medkit attached to the Y button, jump with A, crouch with B and use an item or pick up with X.

Where Metro differs is in place of your standard HUD you have a journal which is called up by pressing back, this has a compass which always points you in the right direction as well as your current objective and can be viewed on the fly. The downside is when you have called up your journal you cannot have a weapon armed so you need to be wary of when you look at this. Along with the journal is a cigarette lighter which comes in handy as an alternate light source. 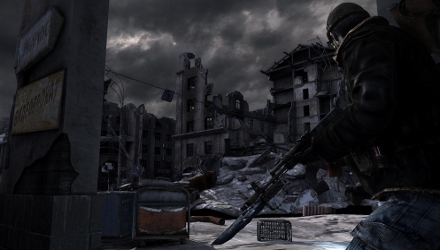 It's a bit lonely

The other points to note are the need for a gas mask at regular intervals attached to down on the d-pad which uses filters, the time left on the current fitted filter is displayed on your wrist watch (LB) which also has a light sensor to tell you how well hidden you are and your head light switched on or off by clicking the Right trigger which needs regular charging (again preventing you from arming yourself.)

Weapons are cycled by pressing left or right on the d-pad and though you will find you have a full armoury at your disposal early on you can only have one weapon armed be it a knife, a rifle or a grenade. This does lead to some frustration as you cannot melee with your knife as your ammo runs low, or throw a grenade while cover firing.

The biggest innovation that Metro 2033 brings to the table is with the ammo/currency. You have two types of ammo available to you; the standard “dirty rounds” have been created since the blast and have limited range and stopping power. Military grade ammo is pre-blast rounds which fire both farther and at a greater force but are in much shorter supply. These military grade ammunitions double up as currency in the towns. You can trade them for more dirty ammo or use them to upgrade your weapons or purchase items like gas mask filters and medkits. It adds a good twist to the game as you have to weigh up whether to save the higher spec bullets for funds or use it in the battles you face.

Tunnel Vision
Metro 2033 is generally played underground and as such it does not have the immense detail on screen of a Modern Warfare or Final Fantasy throughout. However, what it does, it does reasonably well. The lighting effects within the tunnels are excellent as the developers seem to have found the perfect balance between light and dark giving a real sense of enclosure. In many ways these sections of the game borrow a feel from the Silent Hill series, there is always just enough light to avoid getting stuck in a corner but not enough to see your enemies coming. This leads to more than one brown trouser moment as you turn a corner to be faced by a giant mutant looking for a free dinner.

The station “towns” have much more light and with them more detail. The general feel you get is one of squalor with blood stained sinks and meat markets the order of the day. Again it does an excellent job of setting a mood for the player. There is some incredible attention to detail with dust and ash visible in the air, especially near lanterns or fires. 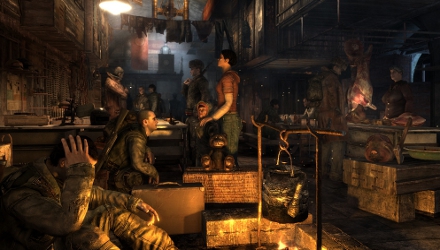 Calm before the storm

The only disappointment graphically is on the occasions you get to venture out into the apocalyptic wastelands of the Russian countryside. Don’t get me wrong, you do get a feeling of vast emptiness but the derelict buildings and overturned, burnt-out vehicles don’t carry the same emotive style as the other areas of the game and I personally couldn’t help feeling a little underwhelmed. There is also the odd element of slowdown when a lot is happening on screen and as far as I am concerned, in the current age, there is simply no excuse for that.

Sound Bites
The tunnels are generally quiet allowing you to hear often before you can see, this adds to the sense of fear and unknown. Within the towns there is a much more tranquil effect where old records and lone guitarists fill the atmosphere. This is extended by the general din of friendly chatter and the odd laughing child. Again, the overall feeling is that it does the job it’s meant to do in a subtle, understated fashion that really adds to the atmosphere of the game.

Conclusion
Metro 2033 is not without its flaws. The afore mentioned slowdown, though sparse, is inexcusable, and even on the easiest setting it can take an entire five round clip of the Shotgun up close to ground a human foe. The Mutants can often take even more before they stop coming which leads to one or two frustrating repeats of a section of the game simply because the enemy just wont die. Also, head shots are a total waste of time as they do not ground your enemy as they should.

Having said all that it is an enjoyable (in a weird and twisted kind of way) journey through the tunnels. Metro 2033 has more than its fair share of shocks and surprises along the way to keep you interested even when the going gets tough. If you like your gaming dark and challenging you’ll get a great deal of enjoyment out of this.