So, as one of the least graceful people in the entire universe, complete with an aversion to games that get you moving, you might be wondering why I’m reviewing the first attempt at a Michael Jackson game since the much-moved-but-equally-terrible ‘Moonwalker’. A number of reasons, really. I like testing myself outside of my comfort zone and a willingness to try new things, maybe, but it’s certainly not just so that I can use it as an excuse to make tasteless jokes about the late, legendary singer’s questionable relationships with children…What?! Don’t look at me like that, it’s not!

Ahem, so, with that out-of-the-way, onto Michael Jackson: The Experience, then; is it a Thriller or just plain Bad?!

Not a small boy or can of Jesus Juice in sight…

Taking its cue from some of the band centric music games available, Michael Jackson: The Experience is a primarily a dance game that celebrates all the high points from the entirety of the King of Pop’s illustrious career. You’ll be dancing and singing, as the game gets you to try all the good things that you associate with the infamous singer. So, that’s the baby dangling mode cut, then.

When you boot up the game, be careful with what you select or you won’t be moonwalking or shouting “Cha’mon” at the top of your lungs immediately; the game tries to point you in a different direction. You can ignore them completely (thankfully), but Ubisoft Montreal wants you to know just how hard it is to dance like Michael Jackson using the MJ School, which is essentially a number of videos where professional dancers and choreographers show you some of the MJ’isms that make up his trademarks.

Be warned; these videos, of which there are many, are terrifically boring. You bought the game to dance, sing, and listen to Jackson’s classics, you did not buy it watch other people do the moves (some of which aren’t even in the game). These videos don’t teach you one iota about how to play the game, and as such they seem a bit of a waste of disc space, especially for the prominence that Ubi have given them. They clearly want you to watch them, it’s the first menu item that’s thrust upon you, but this sort of thing is usually best left as an unlockable, available to those who want the extra insight. My advice? Ignore this fluff and jump into the practice mode, it’ll set you up better. 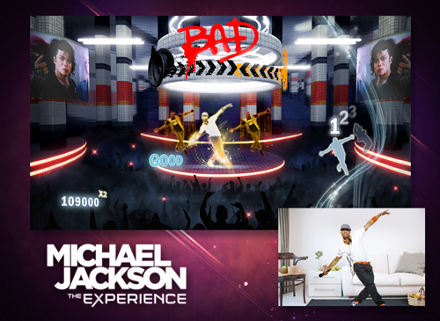 Sums up this screenshot, to be fair...

You don’t really get to moonwalk?!
Okay, so into the game proper and there’s some things you should know. While most of the songs have aspects of both, a few are dance only and some are vocal only. What’s really strange is that whether you sing in your routine or not, for most part, depends entirely on the difficulty you select. The easiest mode for most songs simply sees you just dancing, and always provides you with minimum moves available. Performance mode has you switching between dance and vocal segments throughout the song, and Master mode does practically the same while throwing more complicated moves into the mix.

Another strange choice is the fact that the only time you’ll ever sing an entire song is if you’re playing a vocal only track. So, if you’re not in the mood to get down, you can’t just sit back with the microphone to your mouth and sing along to the entirety of the vocals for Beat It, for example. Nor can you do a song on the hardest difficulty and just do the dance routine. It’s parts of both or take the easy option to just dance, which seems a really bizarre choice to have to make. It’s a bit limiting for a game that’s meant to be about the full Michael Jackson experience. 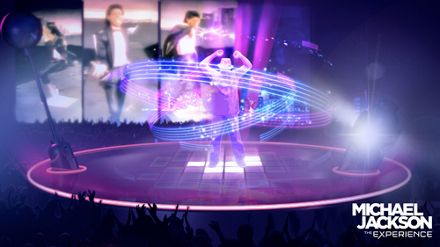 As I said above, your first stop when approaching any new song should be the practice mode. To succeed in this game, you really have to nail the moves perfectly, and in this respect it’s a bit more punishing that Dance Central. This is mostly down to the fact that these are professional moves you’re dealing with and some are difficult to master, but also because of the fine level of calibration; the game is strict on what you need to do to see the word ‘Perfect’ following every move. What it does mean, is that the game is extremely rewarding, especially when you’ve got a routine down perfectly. In the practice mode itself, there are a few features here that put it above Dance Central, and the ability to break the songs down into segments and replay those segments is definitely at the top of the list.

Aside from the usual multipliers you’d expect for completing perfect moves, there are also some bonuses that crop up in gameplay in the form of a King of Pop crown. When these appear on-screen, you have a short window to ‘grab’ them, offering you a chance to double your multiplier, helping you reach those all-important 5 star ratings.

The singing is different to what you’ll have seen in other music games, as you aren’t required to reach the right pitch as you would be in a Singstar or Rock Band. Ubisoft have simplified it so that you only ever have to hit the syllables at the right times or at least match the rhythm with educated grunts. The one thing this helps you realise, however, is just how quickly MJ used to sing, and it’s extremely easy to not be ready for the beginning of a line, no matter how prepared you think you are.

Aside from that, the game has a few issues. Some of the songs are broken; Beat It has notable issues where it will register the same basic move at the same time in the song in each try as a ‘Miss’ or an ‘Almost’. This isn’t sour grapes either, as it’s a complaint you’ll find echoed across the interwebs. Hopefully a patch is on the agenda soon.

Lastly, the one move that we all know Jacko for, the Moonwalk, is a bit of letdown. Rather than using it to teach you at least how to mimic a moonwalk, the game has you just raising your heels on the spot and a crude sliding effect on your avatar does the rest. Shame. 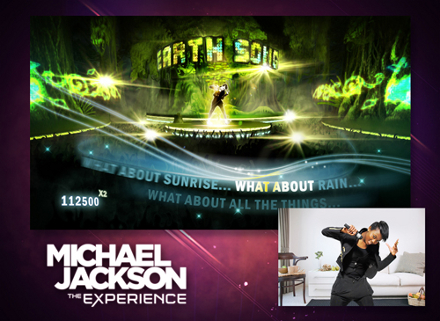 I can't promise you'll have as much fun as this woman.

Sparkly like a solitary glove…
So, as the Beatles: Rock Band did for me before, Michael Jackson: The Experience surprised me by being more than just an MJ themed dance game, but by being a real celebration of the man’s career. Visually, the game oozes everything you know about Michael Jackson’s life in music video, and it’s all about the detail. Each song has its own themed stage; for example, the Billie Jean performance takes place on rundown streets with the dance floor squares lighting up beneath your every step. Smooth Criminal starts with a coin being flung toward a jukebox and landing in the slot, just like the video. When the song hits its peak, previously irrelevant silhouettes all join in on the excellent choreography. It’s these little touches that make the experience what it is.

The authenticity doesn’t stop there. Rather than using your Xbox Avatar or a game specific caricature a ’la Dance Central or the other versions of the game, it uses your own image. The great thing is that your image features a ‘Don’t Stop Til You Get Enough’ sparkle effect; again authentic as well as aesthetically pleasing. Along either side of you in the main performances, are the back-up dancers that teach you the moves in the practice mode. There’s nothing more satisfying in this game than being perfectly in sync with these guys; not only does it look good, but it makes for a great visual indicator that you’re doing the right thing. 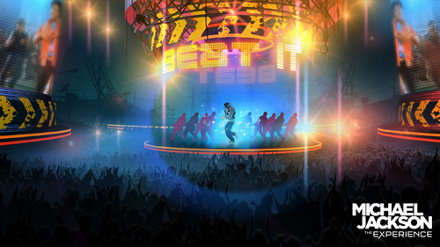 Beat It is the name of a song, not an instruction!

Burn this disco out
Here’s the most obvious part of the review; the amount of enjoyment you’ll derive from this game will be directly proportionate to how much you like Michael Jackson’s music. Shocking, huh? You don’t have to be a die-hard fan, though. I sit in the camp where I can take or leave a lot of the music but enjoy the classics, and I still had fun.

There’s not much in the way of other sound effects, but there are 29 of Jacko’s most famous tracks to plough through, so as long as you can enjoy his music on some level, you’ll be happy here.

Just good friends
Multiplayer here is pretty limited but enjoyable in the right company. There is, however, no online mode so you’re restricted to only two local party modes. Co-op does what it implies and allows you and up to four friends work together to beat the songs, while Battle allows four of you to split into pairs and compete to win with the highest percentage.

There is one flaw here; you can only have one player active at a time, which means you can’t directly compete like you can in other Kinect games (or the other versions of the game, for that matter). It does have a competent ‘jump in and out’ feature, though. Again, like most Kinect games, it’s a compact feature that will probably be the most fun at parties.

Is the conclusion Black and/or White?
Michael Jackson: The Experience is a game that is definitely flawed in some areas and there are some baffling design choices. There is, however, a very solid and enjoyable music game to be found here for the right audience. Fans of the man will easily love the nostalgia and fan service paid while bopping and singing along to his featured discography, but even those who are indifferent will find it easy to lose themselves to the charms of his classics like Billie Jean, Thriller and Smooth Criminal. Definitely worth at least a chance if you’re into this sort of game.