Us poor 3DS owners, eh? We’ve been forced to scoff down token-gesture ports from third-party developers for most of 2011, with rare gems scattered amongst them. With very few games truly deserving our cash, and well, very few games period, we’ve really only had an Ocarina of Time re-release and an excellent launch-day port of Super Street Fighter IV to shout about since the console hit shelves.

Well, after waiting for the third-party developers to do something noteworthy, it seems that Nintendo finally had enough and decided that if you want something done right, you’ve got to do it yourself. Between the back-end of November and the start of December, they finally released the two jewels in their 2011 crown, the first of which was Super Mario 3D Land.

Is it platform-saving goodness or is it simply too little, too late?

Actually, that was a lie for dramatic effect; if that was your guess, you were really bang on the money.

Seems Mario can’t so much as blink without having the Princess stolen. This time, however, Bowser seems to be enjoying his new camera-phone, as he keeps sending our hero images of what’s happening throughout!

That’s as deep as it gets. Mario has to save the Princess. What more were you expecting? 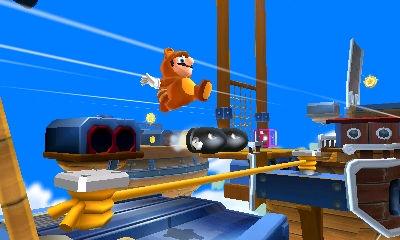 The much-loved Tanooki suit is baaaaack!

Nintendo have ordered too many 1-ups and are passing the savings on to yoooooou!
Super Mario 3D Land sets itself apart from other games in the Mario hall of fame by sitting comfortably between the vast, open levels of Super Mario 64/Super Mario Galaxy and the more traditional side-scrolling action of the most classic iterations in the franchise. It’s not quite 3D, and it’s not quite 2.5D; it sounds odd but it successfully blends the two styles and takes the best aspects from both (2.75D, maybe?).

Of course, your aim is still to get from the start to the finish of each level in the quickest time possible, and while it’s true you’ll be more restricted linearly in sections than in other 3D Mario titles (particularly in terms of camera control), there is plenty of room for exploration and secrets to find for those with obsessive compulsive disorder. It’s a classic formula and progressing through the game’s eight worlds never once gets boring. To put it bluntly, few 3D platformers flow this nicely and handle this well.

Each world, and level for that matter, is uniquely themed, with its own pitfalls and challenges. The enemies are just as varied, offering threats both new and old and interesting variations on both, with the likes of inky Piranha Plants and Spiked Robots coming in alongside stalwarts like the Goombas and Koopa Troopers.

In truth, the entire game comes across as a bit of love letter to Mario fans, respecting and recognising its lineage throughout. You’ll find the game dripping with nods and visual references to games gone by (especially true of Super Mario Bros. 3.), but it offers enough new so that you don’t feel like it’s a total nostalgia exploitation.

Even the power ups are given the same treatment, with returning favourites like the Mushroom, Fire Flower, and Tanooki Suit, while the nifty Boomerang Brothers outfit and propeller box (allowing you to hover upwards for short periods of time) help to keep things fresh. Just like in Super Mario World you can store one power up; only here you can change between them as you please, a nice feature allowing you to change your strategy on-the-fly depending on what you’re about to face.

The game’s main problem is that it’s all a little too easy. It’s not to say that the level design makes it that way, as it doesn’t; some of the levels are downright devilish. It’s just that the game goes out of its way to make sure you’re comfortable, and it does this by drowning you in extra lives every chance it gets.

Hit the top of the flag at the end of each level? Get an extra life! Get a hundred coins? Have another extra life! Jump on more than three stacked Goombas? Have an extra life for each subsequent Goomba! Complete a bonus box? Get a couple of extra lives! 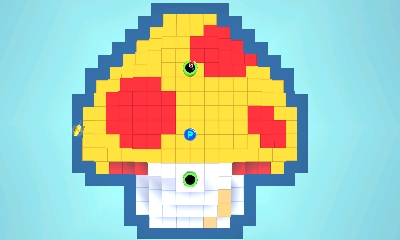 This is a game steeped in Mario history!

Okay, so I made up that last one, but to put it in perspective, I finished my first playthrough with over 60 extra-lives, and I died a fair old amount along the way. If a game is going to be this forgiving, then it begs the question of having the 1-up system in there in the first place.

Then of course, if you die too many times, you’ll be given the option of an invincible Tanooki suit. Now, honestly, this sounds deeply patronising at first, but after seeing it in action and thinking about how it offers it to you, I’ve grown to appreciate its implementation a little more.

The important thing to remember is that you don’t have to use it; if you want the challenge of persevering without, you can, and that’s something only you can decide. Personally, I tried as much as possible to go without, but it’s a great, unobtrusive way of preventing the frustration seeping in, and giving those that need it the means to get through regardless of their gaming experience.

Everyone is catered for without being put in a position where they feel alienated through difficulty, or insulted through hand-holding. Plus, invincible it may be, but save you from plummeting to your death it won’t…

Should you need further assistance, Streetpass is on hand. Spread throughout the world maps are Toad’s houses, and when you walk by fellow 3D Land players, gifts and power-ups will be deposited there for you to go back and collect when you need them. Getting Streetpasses will also reopen old bonus rooms, giving you further incentive to go back and replay them.

Despite that overbearing helpfulness from the game, it remains, at its core, a ton of classic Mario fun throughout. There is a lot of replay value too, as once finished, you can venture into the Special World, which is essentially an entirely new campaign with its own set of original levels and fresh takes on power-ups and enemies. It offers you new threats, new ways to play and adds different challenges into the mix. It’s almost a new, full-length game on its own.

After that, well, you can always return to old levels to get the Star Coins you missed the first time around or find all the secrets. There’s plenty to do for those completionists among you. 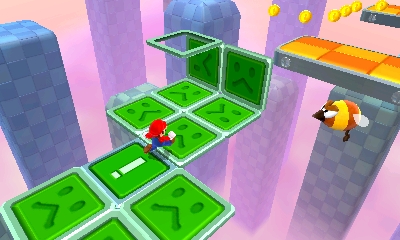 Who’s been dropping Magic Mushrooms?
It was always going to be the case that Super Mario 3D Land would be a gorgeous title, and it doesn’t let anyone down in that respect. Aside from the expected, colourful charm and cutesy design, it looks nice and performs well. Is it anything other than what you’d expect from Mario? Absolutely not; you should know what you’re getting.

I can also say that this is the first game I’ve played where the 3D effect has been more than just a ‘nice additional feature’, actually having a meaningful impact on gameplay. With the 3D on it allows you to judge leaps better; you can land more confidently than ever before on a 3D platformer. It’s not a necessity to use, no, but it certainly helps with the pure platforming elements, and it’s about time that the 3D has been used to benefit gameplay in this way.

It’sa me!
In terms of sound effects you’ll have heard it all before, but once again, the soundtrack is yet another area that perfectly fuses the elements of old and new. A fair old amount of the composition is ripped right from Super Mario Bros. 3 (and others), albeit remastered, and while to some it might seem lazy in spite of it fitting in with the Tanooki vibe, that familiarity will have you tapping your foot or humming along without you even realising it. There are newer, equally charming tracks to behold too, but I doubt they’ll ever be as iconic. 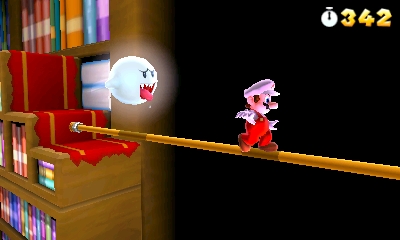 It’s about frickin’ time, really…
Say what you like about the 3DS and how it’s been handled, but when Nintendo decide to bring it themselves, they tend to really bring it. While some may find themselves put off by its seemingly constant attempts at aiding the player instead of devoting itself entirely to challenging them (and it probably does go a little too far in this respect), it’s nice to see a game that caters for everyone and provides an optional layer of challenge or ease for those that want it. Even if that still puts you off, it doesn’t change the fact that you’ll find a suitably meaty, polished and highly addictive platformer and one that’s more than worthy of your time.

So, it goes without saying, partly because of some of the tripe that’s found its way onto the system so far, Super Mario 3D Land stands up as one of the few real high-points in the 3DS catalogue, automatically making it a must-own for the system. Thankfully, its high quality also means that it’s just about worthy of that honour, going at least a small way into making up for the 3DS’ troubled childhood.