The Nintendo 3DS has now been out for over a year, yet it lacks the same number of unique titles that came out on the Nintendo DS in the same period of time. Not that it’s necessarily bad to have a catalogue of well-known franchises. It’s just that it feels like some of the unique capabilities (such as the touch screen) are not being used to their full potential.

Fortunately, Rising Star Games must have thought the same when it decided to publish Virtue’s Last Reward. This brave attempt from Chunsoft is certainly unique, but is it enough to captivate 3DS owners?

Let the games begin
It’s not just the title in Virtue’s Last Reward that is unique. The story itself contains some of the best writing found in a video-game. It all starts off with a man called Sigma waking up next to a mysterious girl inside an elevator. They are soon filled in by their captor on the reason why, and what they have to do in order to get out.

They find seven other strangers that have found themselves in the same situation. They soon learn that they must all play the twisted Ambidex game if they want to secure their freedom.

It’s not straightforward though, as there are various twists introduced throughout the story. The story itself splits up into different branches and the player must choose carefully who to ally with, before entering each puzzle room. It’s fascinating to try guessing correctly who to trust, since this is an integral part of the Ambidex game.

All contestants have a very special bracelet that is both the key to their freedom and demise. Each bracelet displays a number, and the contestant can escape if it reaches nine, or die if it reaches zero. The bracelet contains a lethal poison injection that activates when a contest has zero bracelet points or doesn’t follow the rules. If this sounds sinister, then some of the story twists will come as a shock. 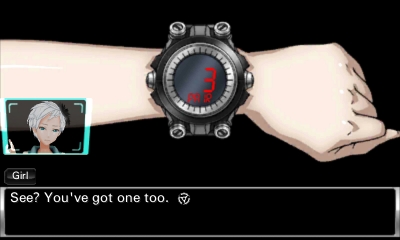 The precious bracelet that decides if each contestant lives or dies.

The amount of ideas that make up the story for Virtue’s Last Reward is nothing short of incredible. Every new nugget of information that the bizarre Zero III hologram bunny host reveals brings new dangers to look out for. The contestants themselves eventually start turning on each other. Most of the time, you’ll be surprised at how a decision plays out; it’s quite unpredictable.

It’s this element of surprise that makes playing Virtue’s Last Reward such a thrilling experience. In some aspects, it’s almost like playing through an interactive mystery novel. There are copious amounts of text to read, but those who want to get right into the action can skip through. Not that it’s advised, as information is one of the best tools in this game. It’s the only way players can get to know other contestants and assess which ones are worth trusting.

The cast of characters represents different types of people. It’s fascinating to see how they all interact with each other, since they would have probably never gotten to know each other in the real world otherwise. Perhaps it’s their desire to survive that brings them all together.

There is so much more to discuss when it comes to the story for Virtue’s Last Story. If I talk too much though, I’d spoil the experience. It’s one of those video-games where it’s best to play through yourself. What matters is that it’s an incredible story that will make players think how they interact with others in the real world.

Escape is the only way out
There are two main ways to play through Virtue’s Last Reward. The first consists of various points where the player can make choices during the Novel section. These choices consist of who the player wants to ally with before entering a puzzle room.

The twist is that each bracelet’s display contains a different colour. Contestants can also end up as either a same colour pair or solo. It’s then necessary to join another one or two contestants with a different colour. The rule is that both colours combined must match the colour of one of the puzzle doors.

This gives the opportunity to choose one particular story branch, since each door will lead to different puzzles. It also means that players can then go back and attempt to see how the story plays out when choosing to ally with other contestants. It’s guaranteed that each story branch will lead to a completely different ending. It will also reward the player with more information into just why this twisted game is happening and clear up other mysteries.

Another way to interact during the Novel section is by voting to betray or trust the other colour-coded bracelet character or characters. Points get added or subtracted from each bracelet based on the voting outcome. This emphasises the fragile alliance between both parties, especially since anyone that chooses to betray someone who has trusted them, gets extra points. It’s an interesting insight into what makes humanity both so unique and its own worst enemy.

The other main section consists of trying to solve the puzzles and escaping each puzzle room. These puzzles are challenging and will take some thinking to solve, but fortunately there is the option to switch to an easy difficulty. This means that the other characters in the room will provide fairly useful hints. Sometimes it takes ages to get through a certain puzzle, though it’s the satisfying feeling that comes with solving each part of a puzzle that makes it worth spending the time.

It’s never really easy to figure out each puzzle, because they are all so different. This makes it even more exciting to see what is behind each door. There are also hidden secrets in each puzzle room that will provide more useful background information.

The only minor flaw in puzzles is that they feel too ambiguous at times. This is perhaps more of an observation, though, since it’s still entirely possible to complete them. It just might take longer for those who are used to more traditional approaches to puzzle-solving. 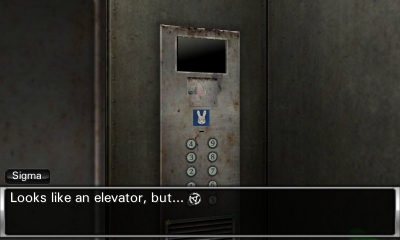 The first puzzle that players will have to solve.

Virtue’s Last Reward makes superb use of the Nintendo 3DS’ unique capabilities. It’s certainly been a while since a 3DS game hasn’t forgotten entirely that it has a touch screen. It’s put to good use here by ensuring that players can touch any specific area of a room and examine it closely.

It is also used a lot throughout puzzle solving, which is effective since it means not spending so much time fiddling around with traditional controls. It truly feels like being inside the room solving its puzzles. It’s possible to stick to the buttons and directional pad to play through the puzzle sections; however, it’s recommended to use the touch screen as it is simply much better implemented.

Like a story book
It’s reasonable for Virtue’s Last Reward to not have the best visuals seen on the 3DS. Most of it consists of static screens, which are like visual prompts that display characters speaking and whatever is happening at the time.

It’s easier to evaluate the visuals when solving the puzzles, because of being able to freely navigate the current room. The textures for items and the backgrounds are simple, yet feel like they serve their purpose all the same. The simple visuals means that the player will focus primarily on the puzzles.

It also makes it easier for objects to pop out when making use of the 3D effects. It’s not too busy to make the player’s eyes hurt after a couple of minutes, yet it’s clear that objects stand out when turning the 3D slider on.

It’s important to note that character models are interesting, and all very different from each other. This ties in with how different each of their personalities is too.

What a lovely sound…
Sound is another area that feels minimal in contrast to other areas. Not that it is necessarily a negative comment, since the few music tracks do their job. For example, the music track played out during moments of desperation (like during escape puzzles) does a good job of conveying the urgent need to escape.

It’s better for a video-game to have a few music tracks that make the player feel the right emotions, rather than a bunch that are forgettable. It’s also a nice touch that they’ve kept the original Japanese voice acting for character speech.

Do you choose to ally or betray?
It’s very difficult to describe exactly what makes Virtue’s Last Reward so great without spoiling the story. It’s really rare these days for a developer to pay so much attention to the story, which is what makes this such a special experience. Even more because of the different story branches that will show just how well someone is at judging others. It’s also one of the very few 3DS titles that makes effective use of the unique touch screen capabilities.

Playing through is reminiscent of the Nintendo DS days, where games felt innovative. Virtue’s Last Reward is easily one of the best titles on the Nintendo 3DS and a title that 3DS owners must at the very least try.