There’s not much that can be said about the latest instalment of The Witcher franchise that hasn’t already been said. Visually it is impressive, with an engaging story, set in a world overflowing with character, life, and humour. Having missed the boat with Dragon Age: Inquisition, it was nice to truly engage myself with this world and its inhabitants.There’s no two ways about it: jumping into The Witcher III: Wild Hunt is quite a daunting prospect. With claims of over 200 hours of content, I questioned whether I was willing and able to make such a commitment – I’ve had relationships which haven’t lasted that long. What I found though was an extremely pleasurable experience which never felt like a chore. Don’t let the amount of content scare you off. You can power through the story in under 30 hours, although if you take this speed-run approach you are truly robbing yourself.

Of all the words available to describe The Witcher III: Wild Hunt, the one that best comes to mind is ‘flexible’. It is up to you how much, or how little, you want to delve into the universe. As a series The Witcher has often been considered lore-heavy, and this can still be the case if you wish it to be. As you explore you stumble upon a multitude of tomes providing tales of days long past, and wars recently fought, for your perusal – if you wish. For those who do not have the time and/or patience to read through these pages, they can safely choose not to, without being placed at a disadvantage. I never found myself wondering who I was talking to, or what I was doing and why – a refreshing change from my previous experiences with the RPG genre. 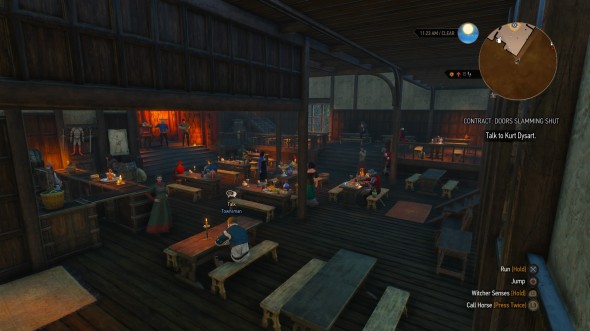 This theme of flexibility is carried over to the secondary quests. Sometimes the main story will lead off into a secondary quest, or you may stumble upon them as you go about your daily business. These quests range from taking only a few minutes to complete, to others which provide an additional story arc, often requiring a number of hours. Whether you complete these quests is completely up to you, seemingly without any negative effect on your experience. I found the secondary quests to be a seamless inclusion, never feeling tacked-on to artificially pad out the content. This adds further weight to the notion that what you’re experiencing is ‘your’ story – although others may follow a similar story, the experiences and paths taken are unique to you.

After an extended tutorial session you move from White Orchard to the much bleaker Velen. You know the place is bereft of hope, not just because you were told it was, but because you can feel it. Whereas White Orchid was reasonably upbeat – all things considered – and you got the feeling that people were making the best of a rather ordinary situation, in Velen you are frequently presented with evidence of how bad life has become for the locals. Untold creatures and bandits roam the countryside, and it is not uncommon to come across far less fortunate souls hanging from trees and signposts. People you talk to have given up hope, focussing on doing whatever needs to be done to survive – even if it means swearing allegiance to those who wish them harm.

During my time within The Witcher III: Wild Hunt, I often found myself drawing comparisons to the Ezio era of Assassins Creed, the good old days of the franchise if you ask me. Roaming the streets of Novigrad took me back to the Rome of Assassins Creed: Brotherhood: bustling with life, with a new experience around every corner. I often found myself smiling at overheard conversations, or the antics of the locals. Obviously CD Projekt RED invested a significant amount of thought and care into their world. This sense of atmosphere continues throughout the experience, regardless of whether you’re at Vizima Castle or absorbing the distinctly Scandinavian atmosphere of the Skellige Islands. 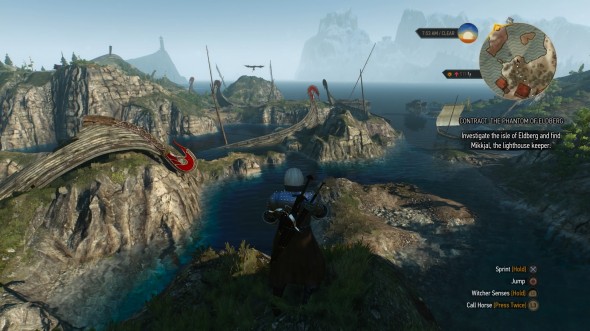 Not everything in The Witcher III: Wild Hunt is perfect. Controls can be a bit clunky, especially when riding your ever-reliable equine companion Roach. When it comes to combat, however, it is free-flowing and intuitive. There’s little need to remember button combinations, nor the allocation of particular buttons to various spells – or ‘signs’ in the case of Geralt. Within your first couple of encounters you’re on top of things, and this doesn’t change as your abilities improve. Combat is satisfying and provides its challenges. Stumbling across a foe who is a higher level than you means that you are about to enter a whole world of pain, and the best approach is to bravely run away with your tail between your legs – vowing to return once you’ve reached a more appropriate level.

Being at the same, or higher level, as your enemy isn’t an automatic path to victory, however. Judging your opponent’s intentions, and acting accordingly, is just as vital, and prudent blocking, dodging, and rolling is all that stands between success and failure. The boss battles are satisfying experiences, with all seemingly well-matched for my skills at the time, not so easy as to take the fun out of it, nor too hard. 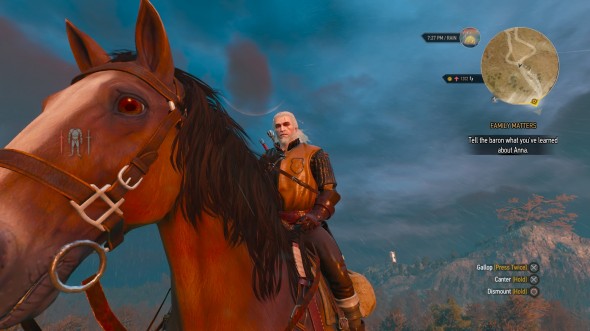 But first, let me take a selfie

In addition to the main and secondary quests on offer, there are many Witcher contracts, treasure hunts, and games of Gwent to keep you occupied – each plainly marked with the requisite level. There’s nothing stopping you from attempting a higher level task, but at least you know it’ll be a struggle. It’s also an effective way for CD Projekt RED to maintain a natural flow of story progression without feeling you are being led down a path, breaking the experience. With so many additional tasks on offer you would expect them to become a distraction, but it never seems the case. They merely add to the lore, and allow you to further empathise with the inhabitants of the world.

On the whole I’m in love with my experience with The Witcher III: Wild Hunt, and can see myself continuing to play it until the next big thing comes along. Every time I pick up the controller I discover something new and impressive, often leaving me in wonder at the degree of detail that’s gone into putting it all together. One particular part involving a lady and a lute in Novigrad really struck me, and resonated for days – I won’t give anything away except that you’ll know it when you see it. 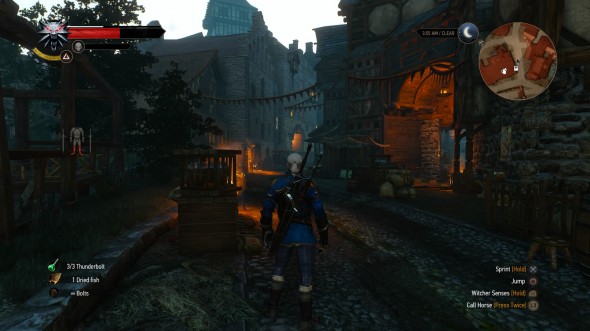 The streets of Novigrad: typically quiet this time of night

Is The Witcher III: Wild Hunt flawless? No, it’s not. There are some niggly control issues, as well as frustrations with inventory management and strange character behaviour, but that doesn’t detract from the overall experience. It is the best time I’ve had in a fantasy RPG, and certainly amongst my top gaming experiences ever. It has a mature and developed feel to it, and addresses a lot of real-world issues. The freedom of choice means that the experience you have will be completely different to anyone else’s, making it an extremely personal interaction. It generated Mass Effect levels of emotion and attachment within me.

If you’re one of the ten people who have not yet allowed The Witcher III: Wild Hunt to invade your free time, I suggest you don’t hesitate, and secure yourself a copy. Don’t even bother to finish this review. Race out the door and get your hot little hands on a copy. You won’t regret it. Coming from someone who’s not the biggest fan of fantasy RPGs, that’s quite an endorsement.