It’s not very often that one single game can grab my attention enough to make me play solidly online for longer than a few months, but while others chose between two Call of Duty’s and Halo to battle on over the past few years, I was suffering (and still am) what I dubbed COD-fatigue. Thankfully I found solace in Battlefield: Bad Company; a shooter that I’ve gone back to time and time again over the last year and beyond. It’s a game that I felt was greatly underrated by a lot of console users; however after a disappointing XBLA and PSN excursion in between, I have been looking at the sequel with a hint of cautious optimism.

The online-only demo for Battlefield: Bad Company 2 has just been released and I was able to get a good look at how the game might measure up to what has come before. After selecting Quick Match from the menu and selecting my class from one of four from Assault, Engineer, Recon and Medic, I jumped into the Port Valdez… Literally, I was parachuted in…

The first thing that struck me as I slowly floated my way down to the ground with limited control was that the game has a far starker, more serious look and feel to it. The game still uses the excellent Frostbite engine to great effect; textures, especially on the actual characters, seem like a huge improvement over the previous game. Upon landing, I was instantly reminded about what I loved about Bad Company the first time around, as all my team mates dispersed, taking on different roles for the upcoming battle. This game caters for so many different styles of play, and as many of my colleagues opted for vehicles or ran off towards the combat, I started looking how to approach the map.

The game mode on offer in the demo will be instantly familiar to anyone who has played the previous game; ‘Gold Rush’ as it was then known, is now known simply as ‘Rush’. Each team takes it in turns at playing attack and defence, and in this instance I was on the offensive. This meant that my team had to arm and destroy ‘computer crates’, which would then push the enemy territory further back on the map. The attackers only have a certain number of respawns in which to destroy each set of crates, but each successful attempt sees that number increase. If all crates are destroyed the attackers win. Hold off the opposition until respawns run out then the defenders take victory. Points are earned by getting kills and arming and disarming the crates, which in the full game will go towards weapon and equipment unlocks, just as they were previously.

Instead of doing what most others would try and start running towards a vacant tank, I opted to play my normal approach of thoughtful, considered movement, using cover to get into the heat of the battle on foot, as this is where I always get my most fun. Rather than dying immediately as is usually the case with these games I managed to bag two kills before falling the first time. First of all, I noted that it takes less hits to get a kill this time around, and this is a very welcome move. Secondly, some of the buttons have been re-mapped, and this is something that was desperately needed before. Previously, it was a total pain in the backside to access your grenades and other equipment, now it’s a breeze with it being mapped to a bumper, and accessories and gadgets are utilised using left and right on the d-pad. It may seem like a little thing, but makes the entire experience that little bit more user-friendly. 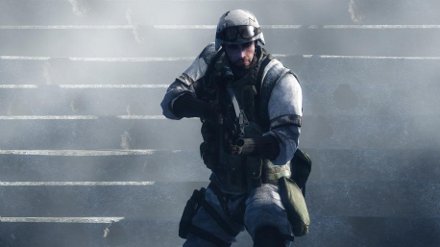 The health system seems to have been given a little more thought. After getting hit, I found that cowering in a corner seemed to eventually replenish my health; however this is a longer process than you’ll have seen in other games. Still, it left me wondering what the point of employing a medic class in the game is. Vehicle-wise, not a lot seems to have changed from the handling, although you have chance to have a play on the new ATV quad bike in the demo, and this seemed a fun way of getting around.

Finally, I want to mention the ‘Destruction 2.0’, which apparently offers a far greater level of damage to the maps, and I didn’t really see a lot of this evident on my few playthroughs; it has improved but certainly not about to rival Red Faction: Guerrilla in the demolition stakes. It is nice, however, to see that demolished buildings no longer have their basic framework still standing despite being otherwise obliterated. It would have been great to have seen a little more in the way of structural damage having an effect on gameplay.

After a couple of games, it’s clear that veteran Battlefield players will feel right at home with this game, as there really isn’t a great deal that has changed, but all of the subtle changes experienced thus far make for a much more refined gamplay experience. Of course, with this only being an online demo, it’s hard to gauge how the game will fare as an overall package. One of the major successes of the original was the introduction of a half-decent single-player campaign, and there are no clues here as to how that will turn out. I have to admit that I feared that the more serious feel might eradicate some of the charm and comedy that was found in the original, but DICE have a pretty good track record. As it stands this demo is a solid example of a good game that has improved but hasn’t changed a great deal. I hope that there’s some more surprises come the game’s release this March.