Frozenbyte have a couple of decent games to their name and if anyone bought the Frozenbyte bundle pack, they would have seen that their strongest release thus far is the wonderful action puzzler, Trine.

Well, such a beautiful game with seamless handling wouldn’t go a miss for sequel surely? Caught between the white-noise of big game announcements, Frozenbyte announced Trine 2 and we were lucky enough to get on the beta to try the game’s character introduction and the first few levels.

Players choose between three characters in Zoya, Amadeus, and Pontius, and can instantly swap between them to solve the game’s puzzles, using each character’s unique abilities.

Zoya is a female thief who will silently walk across caverns and roof tops with the grace of a gymnast. Armed with a grappling hook and some arrows, she has the ability to traverse the landscape and move her team across spiked pits and large chasms.

Amadeus is a wizard. I must admit every time I hear his name spoken I keep thinking of that 80’s track. As a wizard, Amadeus has the ability to levitate objects and also construct square boxes. These help to solve the puzzles that require reaching places, making unreachable objects fall or triggering an event. Amadeus, towards the end of the first Trine had a fire power-up and that is sure to return, just do not expect to have access to it until later in the game. 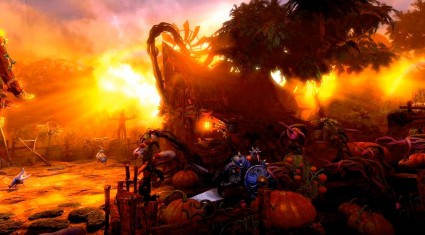 Look at the lighting!

As for Pontius, he reminds me of something out of an old Asterix comic. He is big and stocky, full of armour and carries two weapons from the start. His sword swiping ability has improved from the original game, packing more punch, with the combat feeling more flowing this time around. His second weapon is a sledgehammer, required to break down walls or encased potions. Pontius also carries a shield that will reflect projectiles, and sometimes these projectiles will bounce back at the enemy and kill them.

All in all, we have a diverse character set of which all three need to be utilised to stand any chance of progressing within the game. The version I played (PC) controls very freely to allow you quick changes in character and offers pinpoint accuracy with the mouse when changing the direction of the shield and arrow trajectory.

As you get introduced to Trine 2, you still start very much the same as in the first game. Controlling each character individually to begin with, while the narrator gives you a brief introduction. This importantly, gives you a chance to use each characters attributes before the Trine object is presented to you. The trio will eventually be joined together for the main quest. Labelling the combat as simply hack n’ slash would be doing the game a massive disservice, as it exceeds at making players use strategy as to which character they use to proceed.

From tentacle-firing plants to goblins and skeletons with fire engulfed arrows, Trine brings back many of the enemies found in the original game and throws in some new ones to the mix too. The enemies can be killed in multiple ways; for example, you can levitate a rock above one of their heads and drop it, use a long-range arrow shot or a devastating blow from a sledgehammer. All variants (and no doubt there will be more ways) had a satisfying clout about them. 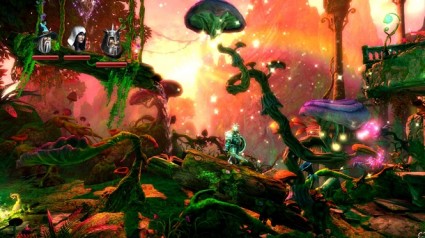 This time round there are some new environmental factors to consider. Water is now a usable property in the game, and if you can get dripping water to a weeping plant, it will spring into life and give you a platform to jump from or trigger a bigger object to move. Vegetation is more interactive, with bouncing mushroom plants, sliding slopes and swinging contraptions all adding to the game’s unique appeal.

The checkpoints are regular enough to stave off frustration but the game also challenges by giving players enough health to withstand only 3-4 hits from an enemy. The upgrade system we’ve yet to delve into but gives players the emphasis to pick up potions to work on further upgrading their character.

Don’t take the following statement with a pinch of salt. Trine 2 has some of the most beautiful side scrolling visuals I have ever seen in any video-game ever, and it’s the environments that Frozenbyte have crafted which make the entire experience magical. From Persian roof-tops, massive caves with a bounty of beautiful plantation, straight through to the purple and midnight-blue skies that are lit up by fire torches and glittering potions.

Every world you experience within the game has been thought about in meticulous detail. Not one moment did I get bored of the environment I was traversing through. Other games cannot match up to this. I would often find other side-scrolling platform games, such as Blade Kitten and Explodemon! devoid of attention to detail and variation. Frozenbyte have the graphics down to a tee and to mention any of the visual set-pieces at this point would only ruin your play-through experience. Trust me, though, you will be blown away.

To say that Frozenbyte have pulled in a big-name voice-actor to act as the game’s narrator would be a lie, however the narration is well struck if a little unfamiliar. Personally, I would love to be hearing the voice of Brian Blessed or Stephen Fry alongside the in-game progression. It would be the icing on the cake. Maybe I am asking for too much, who knows?

As for the rest of the sound scape, it’s bang on and delivers. The sound encapsulates the world and the characters you play have suitable vocalisation too. Frozenbyte even inject the odd bit of humour here and there, though whether it’s actually rib tickling is debatable.

Perhaps the biggest feature of the sequel is the introduction of three-player co-op . The opportunity to drop in and out of people’s multiplayer experience is something fans of the original have been crying out for, and it works. When joining a game, you can start from where a player is currently located, giving shorter odds of a game drop-out due to no players. You’re not locked into your initial character selection either, as when you die, you have the opportunity to switch characters. Providing you respawn during someone else’s death, that is.

Lobbies on the PC version, even at this early stage, are packed full of budding questers who are searching for that amulet. During my play sessions, I never suffered any connection problems, unsporting behaviour or any glitches, so needless to say this element of Frozenbyte’s arsenal is looking very powerful indeed.

Trine 2 is shaping up to be a cracking digitally distributed game, with a disc based release also scheduled by Lace Mamba. The worlds you’ll encounter are a real spectacle and the game will challenge you with its puzzle elements.

Look out for the full review, coming soon!