I have to admit to becoming mostly tired of war-themed video-games these days (with Spec Ops: The Line being the obvious exception), but if I had to nail my colours to a post in the battle of the big two, I’ve always much preferred the larger-scale warfare of DICE’s Battlefield series to the more intimate skirmishes of Activision’s Call of Duty. Sure, CoD is always a tight, adrenaline-fueled precision shooter online and generally has a competent-if-silly campaign, but Battlefield’s vast arenas, destructive oomph and reliance on the team effort has normally sated me in the moments when I’ve felt the need to jump online to exchange virtual bullets with others.

The last-gen versions of Battlefield 4 reviewed favourably when Matt gave us the lowdown just a few weeks ago, but the issues with the PC and new-generation versions have been well documented. Thankfully, at the time of writing this late review, most problems appear to have been fixed (at least with the PS4 version, which I’ve been playing), and although some snags still diminish the fun from time-to-time, Battlefield is as explosive and enjoyable as ever.

Unfortunately for me, in spite of playing and loving Battlefield 2 & 3, Bad Company 1 & 2 and Battlefield 1943 on XBLA, my experience with the series has been limited solely to the Xbox 360 and PS3. I say it’s ‘unfortunate’ only because those titles on last-gen consoles – while still great – limited the number of concurrent players in a room to 24, whereas now Battlefield 4 on both Sony and Microsoft’s new hardware accommodates a whopping 64 wannabe soldiers, finally bringing it in-line with its PC counterpart.

The difference that this makes to gameplay is truly night and day. Maps feel more alive, the risk of being shot is a 360-degree threat rather than just a head-on fight, and while I’ve always felt that the series has done a good job of making you feel like a small component in a larger operation, it’s definitely intensified here. I always find it amazing to realise that when I’m playing as ground infantry and jets and choppers are duking it out in the skies above, there are other players in control of them. Equally, when I’m in the air raining fire on enemies, those dots scrambling for cover are other players. You’re just one tiny part of a large virtual war effort, and it’s quite humbling.

Plus, no matter your play style or skill level, you’ll find a job you can do in Battlefield 4 that aids your team. You might not be the best shot, but if you can do something as simple as spotting and marking enemies or vehicles for other players, then you’re still making a worthwhile contribution.

Destructible environments have always been DICE’s bread and butter, and once again they’ve outdone themselves. Labelled as ‘Levolution’, with explosives and the right knowhow you can cause devastating damage that permanently changes the maps and their layouts. This includes bringing down entire buildings or bridges by taking out their supporting beams, or even flooding the ground by taking well-placed shots at walls and dams. These incredibly explosive actions are a bit scripted, and not quite as dynamic as general building or cover damage, but that doesn’t mean that they’re any less impressive or require you to be any less adaptable. 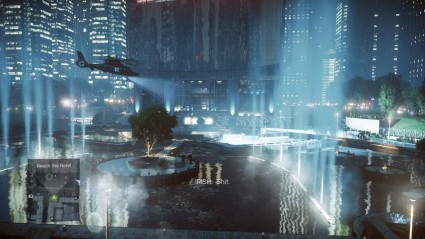 Visually, this next-gen outing is gorgeous.

Not only will you be facing other players’ destructive forces, but also Mother Nature’s. Wind and rain will hammer you, dust storms will block your vision, and you’ll get steered off-course when trying to captain seafaring crafts to your tactical destination. There’s always something testing your survival instincts.

Of course, not everyone is nutty about huge chaotic battles, and Battlefield 4 combats that with a comprehensive list of game modes. While series staples like Conquest and Rush are your go-to options for massive battles, smaller, more focused modes like Squad Deathmatch and Domination – a smaller-scale take on Conquest in comparatively tiny maps with no vehicles – means there’s likely something here for you no matter your preference. Throw in the likes of your typical CTF and Demolition modes alongside a hugely enjoyable air-only combat, and you’ve got a solid selection that’ll keep you busy for a while as you seek to unlock those precious upgrades.

It’s undeniable, however, that the big battles are the real draw and that’s simply because of the amazing events that can unfold when playing. Imagine storming a building with your buddies, only to find yourselves trapped by a tank that’s exploding every inch of cover around you. Imagine getting to the top of the tallest building, stealing the sniper rifle from the oblivious enemy you just knifed before bringing silent death down on your foes with their own weapon. Imagine trading shots with enemies on the ground just as the building next to you starts to topple, leaving you scrambling for safety. From the dramatic to the ridiculous, there’s nearly always something to talk about.

Everywhere you look there are subtle improvements to the formula. Melee attacks from the front can be countered with a well-timed click of the right stick, meaning that just running around aimlessly trying to knife enemies is no longer the one-hit kill it used to be. The feeling of momentum is hugely improved, allowing you to slide behind and over cover with grace and urgency, and you can dive and swim underwater to avoid detection and fire from enemy boats. My favourite new feature is easily the video feed for each spawn point, allowing you to tactically choose where to redeploy without fear of instantly taking a bullet or missile to the face.

While I’ve yet to be booted from a game (which was the main issue that folks have been experiencing), I’ve have had some minor instances of lag and rubber banding, the latter seeing me pushed back a few feet when trying to jump over an obstacle. DICE are usually pretty quick to clean these things up, so while they’ve had bigger fish to fry in terms of launch problems, I’m sure stuff like this will be tightened up soon enough, and neither issue has been common enough to spoil my fun.

Despite all that’s good with the multiplayer, a decent campaign eludes DICE once again. It starts with Bonnie Tyler’s ‘Total Eclipse of the Heart’ and then goes downhill from there.

While you can’t doubt for a second its visual credentials with stunning expansive environments, great weather effects and realistic, expressive character models, it remains a short, bland affair that runs through the checklist of war game stereotypes. Trite dialogue? Check. Double double-crosses? Check. Half-hearted attempts at tugging at your heart-strings? Check.

It wouldn’t be so bad if it wasn’t littered with weird design choices and technical hitches. The voice-acting on the whole is decent but you, Sgt. Recker, are mute. This normally wouldn’t be a big deal, except at one point where one of the squad asked for my opinion and I was forced to press the action button – with no choice of retorts – to respond. After an awkward silence the squad member carried on as if I’d answered in agreement with whatever it was he was prattling on about. 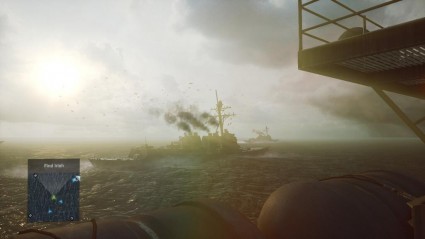 A Flock of Seagulls…

Once again, despite being presented with the notion that I’m in a squad of elite soldiers, everything seems to be a little too focused on me. My cohorts would fire at enemies wilfully but couldn’t hit a barn door with a banjo unless scripted, and enemies didn’t ever seem to give two hoots about them unless I was totally out of sight. Enemy A.I. is a problem unto itself. At one point I was crouched and sneaking up on a guard on a rooftop, he turned to face me before I could reach him, and yet he still couldn’t spot me from a mere three feet away. Some enemies snapped to cover in the wrong direction, allowing me easy kills, while countless others decided to achieve the impossible by attempting to destroy my tank with pistols as I rolled through unharmed. Madness.

A few technical issues also hampered the solo campaign. Software crashes were regular, kicking me back out to the PS4’s dash a couple of times during each play session. There was a point I had to swim through a submerged boat to reach safety, but was suddenly unable to move in any direction but slowly backwards until I reloaded. On the way to my final objective, my boat got stuck on nothing, stranded a foot off the water, again forcing me to reload. Sometimes the checkpoints didn’t even work; a few times I quit or got kicked to the PS4 dashboard mid-level only to find that my chapter progress had been lost, while other times it saved perfectly, allowing me to pick up exactly where I left off. It would have been a much more frustrating lottery had it not been so short.

Personally, I think I’d rather see DICE simply drop the pretence and scrap their solo-campaigns altogether, especially if the fruit of that is something that hurts the overall package and fails to represent or respect all that Battlefield 4 does so well. As it stands, this campaign is little more than an exceptionally pretty shooting alley.

Your online shooter of choice?
With the next-gen versions of Battlefield 4, the series on consoles finally finds itself comparable in size and scope to its PC brethren and its particular brand of chaotic online warfare is all the better for it. Although some hangovers from the various launch issues will very occasionally threaten to sour the good times, if you’re after an explosive, high-octane online shooter, then there are few better available than this.

Just don’t bother if you’re looking only for a standout solo experience, because you simply won’t find that here.