Anything men can do, we can do better

As I delve further into the world of gaming, I am finding I am coming across more and more females competing in online games. This intrigued me and I wanted to know if they found it as hard as me to go against the men, and also if it seemed that it was becoming a new trend for women to get involved and make themselves known. So I decided to do a little digging and ask complete strangers if they wanted to make a stance for all female gamers out there and get their point across! I had some interesting results, aside from a few “I don’t know you, so I think answering questions for you is weird”. But before I reveal what us girlies think of the men we come across in online games, I am going to return to where I began my journey prior to becoming a gamer, as I had interesting conversations with two people who were in the same position as I was two years ago, but went down a different route after getting over their frustration. I’m talking about people who live with a male who might as well be sleeping with their console, and I am sure there thousands of women out there in exactly the same boat. I spoke to Chelle (a.k.a. DavoteKette) and Belinda (a.k.a. Miss Medics) from our very own XBLN.net.

The main point from these two ladies is that compromise is the key. Chelle hates gaming, but had no choice but to accept it because her other half (a.k.a. DavoteK and the king of XBLN.net and PS3N.net) loved it so much. She sees the same situation with people she knows now where they are going through what she has labelled as “The Introduction to Gaming”. The arguments over late nights, never getting any peace for the yelling of “Suck my c**k you c**t” through XBOX Live, the frustration of never getting a decent conversation with your boyfriend/husband because the gaming comes first. She’s never really come to love it, but has definitely gotten used to it, and even has a play on a few games herself when she finds one that grips her. The social side of it she loves, and through past site meet-ups she has met loads of new people that she would never have before, but she insists there must be a happy medium between real life and gaming life. She even wrote the following pointers titled “You know your husband is a gamer when…”

Belinda took a slightly different approach. She chose not to hate gaming because she knew when she first met her boyfriend, that gaming came in his top three priorities in life and if she didn’t make a point of accepting it, she would never keep her man. She has compromised massively (in my opinion) to ensure she fits in with Ande’s gaming world, and not only likes to watch him play some games (like RPG’s and occasionally shooters), but when he’s playing something thoroughly boring to sit and watch she gets in some of her own me time to do girly stuff or play on their Wii. The arrangement in her house sounds like it works a treat, and she has a very valid point when she says that there could be worse hobbies for a man and at least she knows where he is instead of sitting in a pub drunk somewhere, and he loves her even more for being such a cool girlfriend.

I think in a lot of respects, men think they would love a gaming girlfriend. I mean, come on guys, how cool would that be?! Sharing that passion however, is not always a good thing – especially if you have only one console and you both want to play single player games. For a while in my household it worked, as I would only join in with co-op games. Then as I developed more taste for gaming I wanted to hog the Xbox to myself (especially after the release of Fable 2), and poor Simon ended up as one unhappy bunny! It did give me a chance to say “Well now you know how I used to feel”. A few weeks later I traded in my DS and Simon bought me an Xbox 360! Cue me thinking “I wonder what other girl gamers do”. 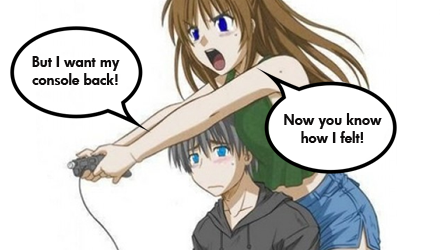 Once a common occurrence in the Devine/Weatherall household!

A Womans Place is in Front of her Console
I spoke to girls from all walks of life, all over the globe, and of a variety of ages. The youngest being 13 and well prepared to state her point to the males out there about us not all being stereotypical tom-boy style women, who sit on our backsides eating crisps and cake all day! Immediately, one thing became clear; female gamers do want to make themselves known and heard of, and most certainly do not want to have to shy away anymore.  They also want more girls to jump on the band wagon and join in with the fun, and the general consensus is that despite little niggles, it is actually fun.

The likes of GamerChix (a women only forum run by Xbox.com) is becoming immensely popular, so much so that at the time of writing I have been waiting for a response to join for a week due to the backlog of emails the moderators are trying to catch up on for new recruits, and let us not forget The Fragdolls. In fact, just a quick Google search for “girl gamers” brings up all sorts of new sites specifically aimed at females, although dotted in and amongst are things like “hot girl gamers” (how cliché) and “girl games” which are still seen to be things like Viva Piñata and Cooking Mama. Do people not think that perhaps we maybe want to play something a bit less pink and fluffy (not to mention childish) or is there still a stigma attached the female gamer? The one that says we’re scared of breaking a nail?!

It would seem from my research, that many girls to be found on Xbox Live these days have been around gaming for a very long time, with the majority of them having been playing for over 6 years and getting hooked on gaming thanks to relatives, boyfriends or just really great games that kept them wanting more. They have owned many a console, although unlike a lot of my male gaming buddies, none dating back to the 80’s and early 90’s. Even in those times, gaming was seen as something boys did, and as a child I remember enjoying playing Football Manager on my brother’s Commodore 64, but I was always a bit of a tomboy in my youth anyway. I even owned a NES, but games like Duck Hunt, Mario and Paperboy still screamed “male” (or ’mail’ in the case of Paperboy – Andy) left, right and centre.

These days there are more games aimed for the females out there, but we either get the child-like games or things like Tomb Raider (which after my last encounter with the feisty heroin, I will not be in a rush to go out and buy the latest version should one be released). The ladies I questioned didn’t really seem to go for these games, and tended to stick to more popular titles like the Grand Theft Auto series, Fable 2 and Call of Duty 4 or World at War, although Viva Piñata did crop up a few times as a favourite! There seems to be no specific favourite genre, but the ones picked up on the most are Shooters (both third and first person), RPG’s and Sports titles. 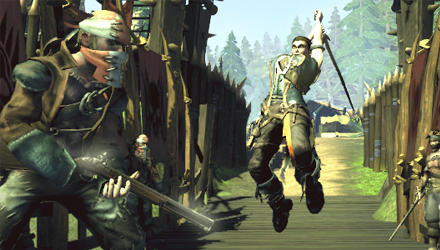 In terms of online gaming experiences, our loves and hates tend to match those of our male counterparts. Gripes being generally annoying people, hosts not sticking to their own rules, server issues and losing, but 27% of those asked did say they had come across issues because they were female such as vocal abuse, being chatted up, being shot at deliberately by a team member and blokes thinking they were the better gamer because testosterone dictates such. The favourite experiences were the social aspect of online gaming, playing in clan matches and getting to play co-op games with their boyfriends. Needless to say, despite the greatness of this socializing, it would appear most of us include very few other females on our Live friends list, with 54% of women saying they had no female gaming friends, and a staggering 92% agreeing that the gaming world is still aimed at men, so it looks like it’s been decided that if you can’t beat them, join them!

When it comes to being in game chat, there have been a few crazy reactions upon hearing the sound of a female voice on the mic. I know I have certainly had some, but then don’t we always remember the negative more than the positive?! Most of the nastiness arises from childish and immature boys (because let’s face it, you’re not a man until you have grown up mentally), with snide comments coming out before a match begins, to quitters who don’t like losing to a girl! I have had some shameful things said to me over Live, but then the majority of males I have played online with have always been really nice and I have been accepted as “one of the lads” so as to speak, which generally means getting dragged into the banter, so girls reading, if you don’t like swearing or joking insults, then don’t even go there!

When asked about how they felt being outnumbered by blokes online, the response was mixed. Some weren’t particularly bothered, some liked the attention they got (oo-er!), some found they got on better with men than women and wouldn’t change that rapport for the world, and others have found it rather intimidating. Throughout every questionnaire answer though there was fighting talk. As ever, the female spirit shines through, with closing comments such as “gamer chicks rule” “don’t under estimate the girls because we are awesome”, “there aren’t enough of us”, and “men can be patronizing, but then we get the last laugh when we end up helping them” to name but a few. Someone even mentioned that girl gamers have been given a bad name because of those ladies out there that think they should be given an easy ride because they have boobs, and there is probably some truth in that, although again; that would be down to human nature judging books by their cover, and always focusing on the negative things.

Maybe one day, male and female gamers alike can come together as one and play happily together online, but then maybe we already have and biased opinions are given based on one-offs instead of looking at the bigger picture. I know I have had to work hard to gain respect from my gaming peers, but I have a met a lot of decent blokes who I enjoy gaming with, mostly through XBLN.net, but unfortunately I cannot guarantee that all the members on there are nice because I have met some downright stupid and immature ones who think they are funny too.

I would like to take this opportunity to thank every single lady out there that helped me write this article. Your input was very much appreciated.