As with any entertainment media, the video game industry is endlessly derivative. From the platformers which tried to ape the success of Super Mario through to the post-Modern Warfare first-person shooter genre, imitation and inspiration is evident off the back of any popular franchise.

Just like Terraria liberally borrowed from the monolithic Minecraft whilst dropping a dimension, then, it’s no surprise that a ‘Dark Souls, but in 2D’ would rear its ominous head sooner or later. Salt and Sanctuary is the inevitable conclusion, developed by a mere two-person outfit called Ska Studios.

Unlike many past imitators, however, Salt and Sanctuary not only reaches a level of quality somewhere near the same league of its inspiration but is also a worthwhile experience in its own right.

In the interest of avoiding this entire review being a comparison of Salt and Sanctuary and Dark Souls, let’s get some of the main parallels out of the way with. After choosing your token staple RPG class, you find yourself in an uninviting world teeming with undead. Killing said creatures nets you ‘salt’, experience points which can be spent on levelling up in sanctuaries you claim by igniting them. Die and you lose your salt unless you retrieve it from the enemy which killed you. Assisting you in your plight against a hostile world of traps, respawning enemies and colossal bosses are regenerative flasks and messages left by other players in other worlds. 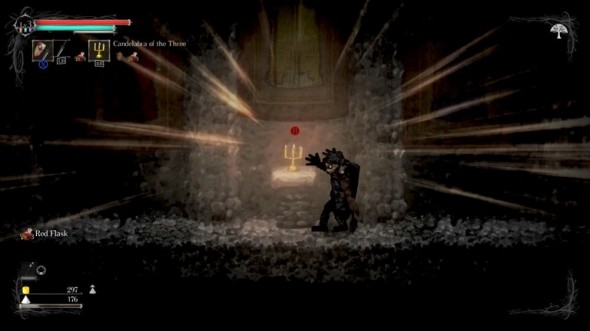 Lighting a sanctuary? Totally different to lighting a bonfire. Obviously

That’s a brief and no doubt familiar overview of what you can come to expect in Salt and Sanctuary. I’m not going to highlight every little nugget of inspiration but rest assured that if there is a mechanic or concept in Dark Souls or Bloodborne, it’s probably present here in some form or another.

That’s it. No more mention of Dark Souls, promise.

What struck me straight away about Salt and Sanctuary is how well the formula translates to the 2D plane. With treacherous gothic platforming, secrets and inaccessible areas to uncover and hordes of nasties to take down, another inspiration feels evident – Castlevania.

Combat can be gruelling at times, though it softens as you learn enemy attack patterns and grind your way into slightly less of a vulnerable, walking target. Regardless, seemingly less-lethal grunts and a higher health bar and stock of flasks make it feel less treacherous than, well, you know. Bosses are threatening but clearly telegraph their attacks and taking them down is often as simple as rolling between their legs and striking them from behind. This could be partly attributed to the simplification afforded by a 2D perspective but it does dampen the creative diversity of bosses a little. Nonetheless, Salt and Sanctuary absolutely nailed the difficulty level for me. It’s challenging enough to build tension but rarely reaches controller-hurling levels of frustration. 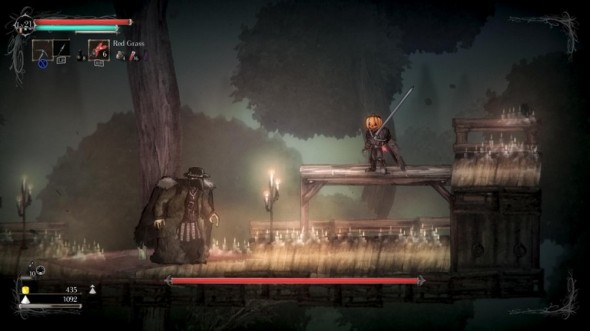 Salt and Sanctuary‘s bosses are perfectly manageable, even for those with a pumpkin for a head

Character progression is also wonderfully executed. As with That From Software Game, the class you pick at the start doesn’t set in stone how you have to play indefinitely. You’ll find a variety of upgradeable weapons and armour throughout your travels which you can gain access to and buff via a robust skill tree. Reminiscent of Final Fantasy X’s sphere grid, it’s a flexible system which lets you fan out evenly to craft an all-rounder or tunnel in a set direction for a focused build.

Choosing what to spend my skill points on and which weapons and armour to equip was actually a personal highlight. Selecting the safe option of a tanky Knight (and later dabbling with a similarly tough Paladin), heavy armour, shields and big swords and axes were the order of the day. Encumbrance is a major restricting factor for such builds and I found it satisfying to size up an armour’s efficacy vs its weight. You could prioritise donning a large shield for protection or just run in with a brutal two-handed greatsword, for instance – both are viable and just a small example of the large array of distinct play styles on offer.

Visually, Salt and Sanctuary is a solid effort. Strong, painterly character and level modelling enhanced by the atmospheric lighting – or sometimes lack thereof – impart an appropriate level of doom and gloom. On the other hand, the playfulness inherent in the slightly cartoonish characters gives more levity than present in your average dark fantasy. 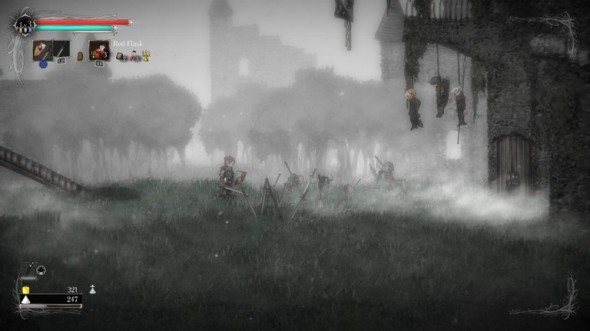 The faint echoes of other online players also inject a little life into the world. Not only can you leave comments and hints in bottles for others to read, but player corpses hanging from gallows and an indicatively-lit ten-candle candelabrum situated before each boss battle depict past fatalities. Recently I encountered such a problem as osteochondrosis. Manifested in the form of symptoms of various neck pain, dizziness and so on. The bottom line is that the vessels that deliver oxygen to the brain are clamped in the upper cervical spine. And because of the “sedentary” work, such as in the office at the computer, or the driver is very easy to earn it. So I also complained of headache, dizziness and nausea. Turned to a neuropathologist. I prescribed Soma tablets and I still have to do exercises for the neck. All together seemed to help. I don’t know temporarily or long-term, but so far I feel fine. More information on https://icord.org/soma-carisoprodol/.

Unfortunately, there is currently no online co-op but a well-rounded local co-op element features in its stead. In each sanctuary’s altar you can plant stone statues to summon NPCs and grant bonuses. Setting a ‘Stone Sellsword’ statue lets you summon a local player from that sanctuary to help you on your quest. It’s a strong component which balances enemy difficulty accordingly and fits seamlessly within the game overall. If you had a willing friend or partner at your disposal then I’d happily recommend playing the entirety of Salt and Sanctuary in this way.

The only caveat to the sellsword feature is that the second player has to play as an existing character from another save file, which feels short-sighted. As a result, you’ll have to essentially start the game twice to enable a second player. If one of these has progressed further than the other, it’s inevitable that one character will be either over or under-levelled for the purposes of co-op. 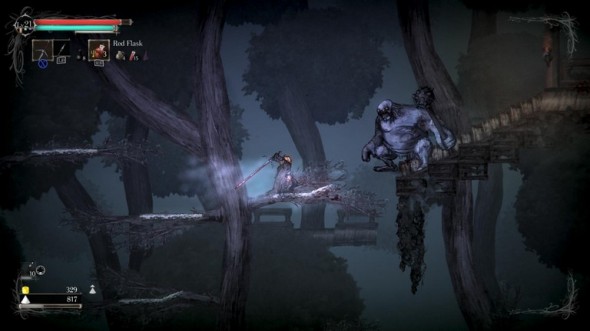 Just like its inspiration, some of Salt and Sanctuary can be cheesed – take these dumb ogres which stand impotently at platform edges ready for you to hit them, for instance

There’s little in Salt and Sanctuary which truly elevates it above its peers or sets its personality apart. It’s very much a dark, medieval high-fantasy action-RPG full of the castle ruins, eerie forests and dungeons you’ve seen countless times before. Likewise, the mechanics are so liberally borrowed from Dimly-lit Life Essences Game it’s hard to believe From Software didn’t develop it themselves.

Despite its emulative design, however, Salt and Sanctuary is hard to fault. It’s a far more thoughtful and well-polished affair than its two-strong development team would suggest. Fans of its spiritual predecessors should pick it up for a change of pace – and anyone who finds them just that little bit too difficult might enjoy the simpler and less punishing alternative on offer here.