Game over for the publishing giants?

Game publishing companies are some of the most recognisable names in the video-game industry. Generating millions in revenue from publishing the games we play, they are an undeniable success story, but are they actually necessary in the modern entertainment world?

The current model of game development, where the developer and the publisher are two different entities, is a relatively new one; travel back just a few decades and generally a company would employ developers directly and then market the resulting games. This model resembles the way indie developers work at the moment, and it was fine for the industry then. The market for video-games was small and the games were exceptionally simple because of the relative primitive nature of the machines at the time.

The games industry had undergone a major crash and had taken a few of the larger companies with it, most notably Atari. The companies that managed to weather this storm moved their focus on to the newly emerging home computer market, mostly the Commodore 64 in the US and the Sinclair Spectrum in the UK. These machines were vastly more capable than the consoles that had preceded them and opened up a new wealth of gaming opportunities.

Both Activision and Electronic Arts survived the crash by shifting their focus to the home computer market; they were joined by a myriad of small companies made up from the remnants of the previous industry. These companies had experience developing games but didn’t have the financial strength or expertise to properly operate in what was a much smaller field.

This created an environment that the giant publishers could grow in, international sales and marketing guaranteed to grow sales numbers beyond what would be possible for the small developers to attain, the days of bedroom developers and all-in-one software houses was numbered, at least for now.

The market at that time was fragmented; selling games overseas, a necessity to get the sales figures required, meant physically shipping games to the destination countries. Marketing meant buying ad space in magazines. Both of these cost money and because of that the publishing houses took the majority of the revenue from sales. Although the developers got a fairly small cut it was still better than what they could attain on their own; so the publisher became a necessity. 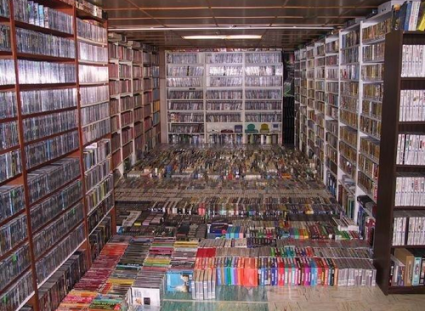 We all still cling onto physical media. Are we part of the problem?

Flash forward today and the market is very different. Digital downloads are now becoming the norm when you buy a game and when you release a game digitally, you don’t have the distribution costs physical media attracts. Development costs are higher now than they have ever been, but the rise of sites like Kickstarter has shown that it is possible to fund a game without selling the rights away. Marketing doesn’t require paying for ads anymore, social networks like Twitter and Facebook are far more adept at getting the word out; online magazines and blogs are cheaper than print magazines and get comparative or better readerships.

Microsoft, Sony and Nintendo have shown support for independent developers, programs like Steam Greenlight on the PC provides a marketplace and a huge level of customer awareness.

It is entirely possible for a developer to compete in the current industry without using a publisher; indie developers are seeing more and more popularity and success all the time but triple A, publisher driven, games still sell far more copies. Publishers have the contacts and the money to sell games. Call of Duty gets television adverts and Eminem soundtracks, we hear that Bungie have received over $100m from Activision to make Destiny.

We’re part of the problem too as we still buy a lot of boxed games; we like to have the physical copy. You can’t trade in a digital game yet, the rumours are that the feature may be coming but until it does, it’s financially sensible to have something you can trade in when you’ve finished.

Publishers are still important, but it’s not hard to see the end. With digital downloads, social network driven word of mouth and crowd funding, it won’t be long before we see the all-in-one software house competing with the corporations again.