How to make a gamer

Like a lot of people around the world, gaming has always been a hobby, an interest and most importantly an escape. After a year of being with my current partner I introduced an addition to our relationship; my gaming obsession. What started off as a rocky beginning passed onto something that was not expected. I did the impossible; I turned a nice, normal woman into a gamer and here is how I did it.

Pretty self explanatory. If you’re going to be a gamer you need to play games all the time. Gone are the days of television and watching movies. The only channel to be on is the one where the gorgeous graphics of your console pop onto the screen. No more sitting through another helping of ‘Dirty Dancing’ or episode of ‘Ghost Whisperer’. Fire up a game and make your partner sit through the eight hour solid stretch of game playing (HDTV optional but recommended for best results). The games played need to be varied to show that they aren’t all mindless ‘kill everything that moves and has a digital pulse’ and if you want to throw in a curve ball try something child friendly like Viva Piñata or any of the Lego series.

2. Talk about games
This sounds really simple but it’s not as easy as you think (brainwashing is a hard task). You need to talk about everything, whether it be the bizarre sexual tension between Ken and Ryu (BLASPHEMY! – Andy) or the Master Chief killing half the universe while never changing his clothes. Fact and fiction need to be intertwined so that your partner’s concept of the real world is so warped and twisted, she believes that crazy homeless people are hunting her, to which she fends them off with a with a gumball machine she found in an abandoned bowling alley, even though she owns a gun. 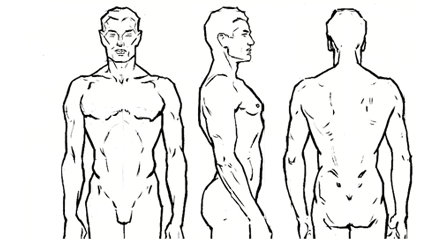 Would you like me to draw you a diagram?!

3. Offer to let them have a go
This is going to be the biggest test to any relationship, letting her have her wicked way with your… erm… controller. Now what started as a good idea turns into a rental of your equipment while you want to use it. This is good in certain circumstances but in this case can be catastrophic if she decides that she wants to smash Piñata for the next four hours before sending Lara off a cliff for the 353,000th time in five minutes. This step should be approached with caution and all annoying games need to be destroyed or hidden in a safe at the bottom of the Atlantic Ocean.

4. Play co-op with them
To regain control of your console (second pad is required) you need to pick a game with a co-op mode, preferably one that you want to play and play it all the way through. One of two things will happen, the first being you will kill everything as your partner runs around looking at the scenery or running from enemies like OJ from the police, or the second being that she will kill everything and make you look like an idiot (in the event that the second happens never touch a console again and flog yourself in embarrassment). Either scenario will bring about a good time and quick completion of the game at which point you need to buy another game to secure your place as king for the next millennia and securing world domination. It may also be a good idea to pit your new partner in crime against a horde of real people in an online mode to regain your superiority. Caution should once again be taken as this provides a different level of gaming and could result in several “I can’t do it” and a few million “I’ve been got”.

5. Buy them their own console because they keep borrowing yours
This is essential when you come home to find your partner in a love affair with your once prized possession. No longer will you be the centre of attention for either your partner or your console so drastic measures need to be taken or you may be forgotten by both. To stop your console being passed around like a dancer in a strip club, spend the money so your partner has her own toy to play with (additional screen is a must). Create her a profile, lock her in a room, and go back to your daily sessions of weapons training and military tactics while awaiting the next apocalypse(additional copies of games with multiplayer will be required as she will want to play all the same games as you).

If you have taken the time to follow the above instructions you will find that you have turned your partner into not only a gamer but an addict. The hours of comparing online stats and achievements will be essential to your daily routine and playing ‘who’s the better killer’ is a fun way to add extra enjoyment to your relationship. The above guide will only be useful if your partner has opposable thumbs (imaginary girlfriends can’t hold game pads).

Subject to what you may have read, Kirsty, my partner, is actually quite the gamer. No longer scared of online gaming and is something of a mean shot on Call of Duty. What started as a way to bring her into my world gave her a deeper understanding about my passions. Unfortunately she is now having sniper training for real for the times when I really annoy her (all the time).