It happens to every gamer and some point in time. Sometimes more than just the once. It’s what I like to call the ‘dry spell’, where you pop a game in the console, start to play and promptly turn it right back off again. The will to play any game has completely disappeared and it doesn’t matter what game is in the console, it could even be the newest game on the market that you have been waiting since forever for, it’s like eating a really nice looking meal but one that tastes of nothing but sawdust.

The other week I had the chance to play a game that I had been awaiting since Eurogamer Expo last year in Aliens vs. Predator. It may not be a game of the year candidate but it was still one I wanted to play. Into the console I popped the disc and within ten minutes I wanted to play something else. I popped in another game and the same thing happened. Twenty two titles later it dawned on me, I hit a dry spell.

If this has happened to you before then you will know where I’m coming from, if not then you best expect one at some point in your gaming life. Either way, I suggest you read on.

I, like many people have been a gamer for most of my if, in my case around twenty three years. As soon as I could pick up a joystick (back in the 80′s) I was hooked and for me it was my way out of reality. My first gaming experience was on the Spectrum Sinclair ZX81 and from then on I have never looked back. Over the last twenty plus years I have seen games evolve from nothing more than pixelated representations of people, to what we get now with this current generation of games. With each technological advance I have played some brilliant games, both online and offline and generally I go through phases of either playing completely online or solely on the single player modes.

Just recently, for the second time in my life, I hit a dry spell where I just didn’t feel like playing games at all. There were loads of games I wanted to play, but when it came down to it I felt like I was forcing myself to play. It wasn’t that I had no interest in the game; it was more because my gaming appetite had completely vanished. I tried several games and nothing seemed to make me want to stick with it for more than ten minutes at a time.

Gaming is my life (well not all of it, but you get the idea) and I decided that I needed to sort something out, as the frustration was killing me. The first time this happened I was in full blown meltdown and I didn’t want to do anything. It took me over two years to pick up the pad again (no good if you write about games) but this time I thought I would strive on. I owed it to myself to regain my enthusiasm for gaming as well as for my readers, after all, if I didn’t play games how could I write about gaming?! 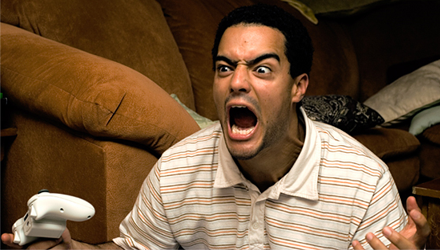 Picking up the pad was very difficult for me as I had loads of additional things plaguing my mind, with no way to vent them. My gaming collection isn’t the biggest in the world and not having much variety in genre to play probably didn’t help. My collection mainly consists of JRPG’s with a couple of shooters and a racer. This lack of variety wasn’t helping my anxiety, so I decided to borrow some games from a friend to quench my thirst. This still didn’t help and the only thing I accomplished was angry gaming (playing games to relax and ended up getting more worked up). Frustration really took over when I played Alien vs. Predator. It wasn’t because the game was bad or anything, it was mainly because I really wanted to play it but just couldn’t muster one single ounce of motivation at all. I decided that enough was enough and I promptly put the pad down and decided to send the game back to play at a later date.

Giving up on your hobby is a hard thing to do, in my case, though, it wouldn’t be for long and so I had to find something else to do in the meantime. I found salvation in watching a variety of TV shows, some you may like and some you probably won’t. The menu for the next few weeks consisted of True Blood, CSI (all ten seasons) and Leverage, which I hadn’t heard of before but took a chance and enjoyed. I also started reading again (don’t tell the Mrs, who thinks I still haven’t read the books she got me for my birthday last year) although reading two books at the same time probably isn’t a good idea for some people. I spent more time concentrating on the little things like running the house, sorting washing out, cooking and baking with my son. This continued for several weeks until I finally I got my motivation back gradually. I started playing for the odd fifteen minutes here and there, and continuing some games that I had in my collection.

Picking up the pad again was a real boost in confidence and I felt like I had some harmony back in my life. All throughout my gaming slump I hated gaming, and I hated myself for it. Gaming has always been my safe zone, the place I can go off and hide in. It’s always been my salvation from worry or heartache and somewhere my mind can wander off to. When gaming wasn’t there, I felt empty like I had lost my best friend.

Getting back into playing games wasn’t too hard. I knew that I needed to get some games that would give my brain some stories to play though. I borrowed Red Dead Redemption (because I hadn’t played it) and Fable 2 (because I hadn’t finished it) off my friend (Guess who! – Andy). Fable was the first game to be finished and it took me all of two days to complete all of the story missions and most of the side quests. Red Dead I’m enjoying way too much to rush through it so that’s one game that has really brought back my enthusiasm. I think the main reason I started to hate gaming was because I wasn’t taking time away and every game I was playing just seemed to merge into one. On a subconscious level my life was lacking something, albeit the variety of gaming but also the variety of life. The lesson had been learned and although I still very much like to shy away and have a life of fantasy, I need to keep some sort of normality so that I don’t get bored again.

So there we have it, my dry spell. I know some of you out there have had the same thing happen to you, it would be good to hear how you got over it.