OnLive: The next big thing?

New technology is always being researched; even as you’re reading this new developments have probably been made. At the GDC earlier this year an apparent technological breakthrough was announced for not only developers but for the consumer too. Stripping the boundaries of what we know as a conventional games console, OnLive has hit the gaming community like a whirlwind. Not only does it not have a disc drive or need any digital media, it also needs no storage at all. Why? I hear you all ask! This gaming platform is not like any other. Needing only the internet games can be streamed directly to your TV in HD… That’s right, in HD. Oh and I did say streamed!

One thing that has plagued developers for many years when it comes to creating games is storage space. Pushing the boundaries of either graphics or a games lifespan always takes its toll. You either have to do without one or the other, make a compromise or you can extend the amount of disks that the game is distributed on. This more often than not can have its own issues but for the most part works ok, but plagues 360 developers. The problem with modern technology is that it only goes so far before it hits a wall and then you have to wait for the next technological breakthrough, such as HD-DVD, which hit the limits of storage before Blu-Ray surpassed it, only to still have some issues at the moment. For example on the PS3; reading the information off the disc quickly enough was a big problem and it’s not one that has yet been rectified. Until the drive speeds match that of DVD players, you find yourself having to install a portion of the game on the hard-drive just to even run the software. The second thing to take in to consideration is how limited you are on development due to being constraints of the console. We all know that if you buy a PC game that needs a beast of a PC with a decent graphics card inside it, and yours doesn’t have one, it’s not going to work. 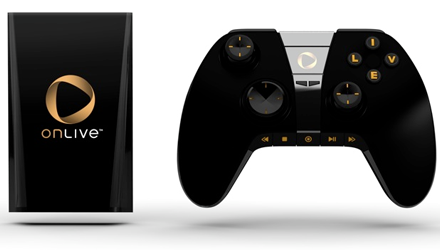 The micro-console and joypad.

Now you may be wondering what all this got to do with OnLive? Well its quite simple! If you strip away the hard-drive and the graphics card and all the components that you would generally find inside a PS3 or an Xbox 360 you are pretty much left with nothing but an empty shell and this is where the genius of the system comes into play. OnLive will be subscription-based gaming on demand console without the need for processors or graphics cards. All the media is stored online and everything runs from a server and you simply rent or buy the games you want to play. No disc or storage is needed and you can just switch on the receiver, currently being labelled a micro-console, and click on the game you want. Alternatively you can use your existing PC or laptop (spec won’t even come into it) and all you need to do is install a browser plug-in. The last thing required is the controller, which looks like your standard Xbox360 controller, and away you go.

For it to work all you really need is a minimum of 1.5MB broadband connection. The downside to this is that the speed of your broadband will determines the quality of the picture you receive. If you have at least a 5MB connection you will receive HD resolution, anything below that would only give you SD. Balance it with the plus points however, and it becomes an attractive proposition once again. With no digital storage required this means that games could be as big and lavish as the developer wanted, and because there are no parts like a graphics card, processor or memory inside your receiver, you would never need to upgrade as the technical constraints are removed. Put simply; if the game-server receives a game with higher resolution graphics and your TV is capable of showing them you would automatically receive the benefits without the need to upgrade the console to see the difference. The micro-console, joypad and the subscription have also been touted as being a fraction of the cost of the cheapest console on the market on the market today. 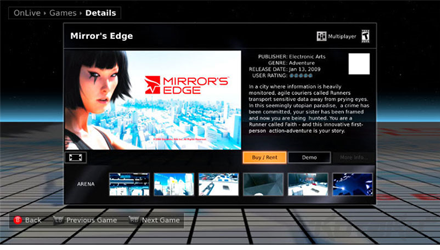 As promising as it sounds, there are some major issues. When it comes to purchases, I like to be able to have things I can own and physically hold in my hand. Downloading games is convenient but where does this leave retail? Normally you go to a shop to purchase a game but what happens when you take away the digital media? Game stores, and other stores for that matter, could suffer dramatically with the introduction of this type of device because there is effectively nothing to sell, and we know the likes of Game make most of their money from selling software, not hardware. Retailers won’t be the only companies to be hurt by this as publishers will also be hit too without the need for discs, cases and manuals. I know some people will be sad to lose the option of picking up special editions, which give you little bonuses such as additional content or statues to place on your mantle.

More importantly, what happens if you buy a game and you don’t like it? It’s not like you can trade in the offending game. You do have the option to rent the game but if you rent often this can become expensive. There is also an option of a demo but let’s face it; it’s not like a demo is always a true reflection on what the actual game is going to be like. Finally you can watch people play the game live too but it’s not the same as playing it yourself.

I know we are a long way off before other companies take on board this technology, before this new wave of console gets to the top of the gaming food chain. I’m hoping that in the future there will still be an opportunity to leave the house, wander around your local game suppliers, and still be able to own something that you can physically hold. I do think that the OnLive model could be revolutionary, but I also think that it needs way more thought put into it. OnLive is currently in the beta-testing over in America and it would be good to hear what real users have to say about the service. Here’s hoping that it will be affordable and worthwhile for the people that will be using it.