Have you ever been in a situation where you’re playing a game and you suddenly finding yourself screaming something like “OH F@$#! Come on, Seriously?!”

Well, if you’re like me, that happens rather a lot. Actually it happens almost every time I play a game, so usually I start to question whether I’ve picked the right difficulty setting or if I just need to go away, have a cup of coffee and work out where I left my man-purse that evening.

The biggest problem I often find is that there are far too many options to choose from, and despite the rather humorous naming of them, sometimes each of the settings fall somewhere between ‘kill everything in a single shot’ or ‘stick your head between your knees’ territory, with no real idea of where you actually are until you die.

Take a look at Doom. The easiest setting was named ‘I’m too young to die’ and the hardest setting known as ‘Nightmare’. Everything else was a selection of extremes, resulting in a game that was either too easy to the point of presenting no challenge whatsoever, or so hard that it would make you want to tear your own hair out! 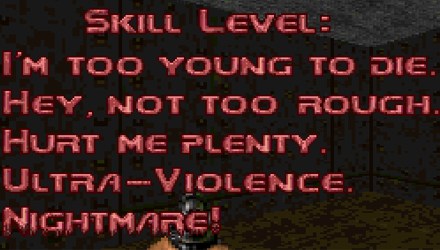 "Hey, not too rough" was probably the only real choice here...

Back then, there was no option to let you change the difficulty halfway through, so you either ended up playing a game the whole way through with no challenge whatsoever, or you would end up getting mobbed just as you turn the game’s first corner, ultimately resulting in a rather unfulfilling experience.

Then again, if you look at some games that automatically adjust their difficulty according to how well you’re playing them, there isn’t much difference here either. Homeworld is a fine example of this.

Homeworld decided that if you had a powerful fleet at the start of a level then it would spawn its own fleet in kind. The game was flawed in that, if you had lots of low powered but highly maneuverable ships instead of one big powerful one, then you were instantly deemed to have a weak fleet. This meant that you could easily buzz around the smaller sized opponent and obliterate them in a matter of seconds. If, however, you built lots of big powerful ships, then your opponent would spawn with lots of little ones and wipe you out instead.

It was a collection of extremes, since Homeworld didn’t really know how to work out how good you were, other than if you were the biggest dot on the map at the start of the game. 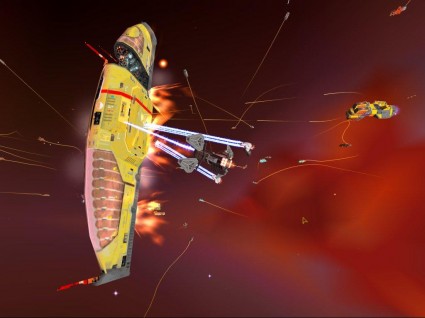 Doom wasn’t released in an age where we had the processing power to allow the game to scan your playing style and work out if it should make things easier or harder, yet it has managed to set a precedent, albeit a very bad one. Modern gaming still gives us linear, pre-defined difficulty settings that still fail to provide an appropriate level of difficulty based on your own skills, despite the prevalence of an A.I. Even Call of Duty now has difficulty settings that range from ‘Kill everything by staring’ to ‘Practically Impossible’

So why not use scaling-difficulties? Surely that’s a better suited approach for a game in 2011, and it’s not as if the concept is new. Games like Max Payne introduced a far better method of measuring skill back in 2002. Max Payne’s scaling-difficulty gauged how well the player performed against A.I., how accurate they were with their bullets fired/hit ratio and how much damage they’re taking. It’s a much better system in theory, except, Max Payne only manages to make the enemies slightly harder to kill rather than spawning more of them, or telling them to use different tactics.

When considering scaling-difficulties, however, one must ask the question: does it suit every gaming series? We’re further up the food chain now in terms of raw processing power, so instead of one big graphical block to shoot at, now your enemies have individual ‘hit points’. Head, arms, torso and legs are all fair game in today’s action adventure, and even though you can kill an enemy by unloading a full clip into their shin in some games, we’re closer to a realistic feel than we’ve ever been.

If we adopt a scaling difficulty set to Call of Duty, and the player has a continued fetish for shooting his enemies in the shin, will the A.I. start hopping around on one leg when attacking? Perhaps they’ll continuously lay prone on the ground, refusing to stand up and face ‘Sweet Shin Music’, forcing you to change-up your strategy?

Joking aside, perhaps it could be the best thing to ever happen to the series, forcing you into a real-time war-like scenario where you need to employ a variety of tactics to get the job done, therefore not remaining overly reliant on the same run-gun-melee style you’ve used to blaze through the previous three levels.

So, all that means we still need difficulty settings right? Well yes, but lets bring them up to date… 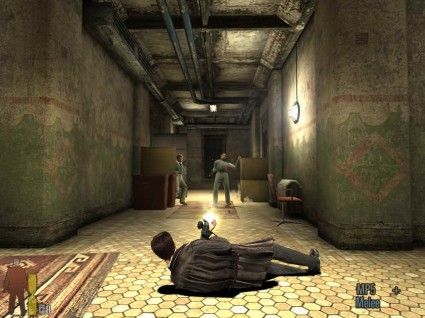 Max Payne had its own way of ramping up the difficulty...

Think about it. If games like Max Payne, Call of Duty and just about every other game that was released in the last few years can work out where you hit someone, then it means the information is already coded into the game for programmers and developers to implement a better learning style. We already do it in a sense, online play on Call of Duty uses it for its points system.

Players earn points for different areas of their opponent they’ve managed to hit, and while it is a bit like ‘points win prizes’, it does mean that the higher skilled players will generally earn more points and in turn get matched with players who are up to their standard.

Have I come any closer to answering the question adorning the top of the page? I’m not sure. In answer to that specific question, then all things considered my answer is no, they shouldn’t exist, however we do still need them since developers still haven’t fully grasped the differing ability levels of the modern-day gamer. Especially in a day and age where there is such a big push on online play over story-based modes. Some people are more proficient at pulling off a headshot than others, it’s as simple as that.

Unfortunately, this means that for the time being we still need to navigate the minefield of settings trying to find something that ‘fits’. This means, for me at least, starting at the hardest setting and dialing back until I don’t die five times in a row.